I have a drop pod, paints and glue all somewhere in the depths of the Postal Service at the moment, so i can't do anything hobby wise until they arrive, which is a shame really seeing as all my Soul Drinkers need is another Drop Pod and a paint job on the Vangaurd Veterans and they're at 2000 points AND i've got no more exams so i can settle down and actually get some done. Typical.

Anyway, i see this as an ideal oppotunity to post up a list of my hobby projects over the next few weeks.


Finish my Soul Drinkers, then wait for Sarpedon to arrive

Complete the modelling on 'The Beast'

Make a start on the painting of my Malus Darkblade-led Druchii, as they are in this state at the moment, plus twenty corsairs and one painted Cold One Dread Knight: 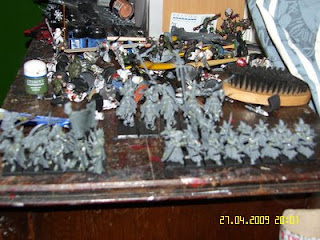 Of course, this all depends on how quickly the parcel of paint turns up.
Posted by Khorneguy at 22:06 No comments: 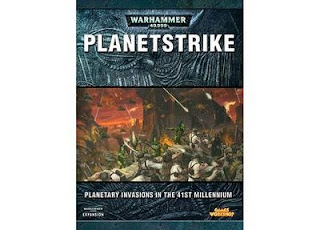 I've been watching the approach of Planetstrike with mixed feelings. Nothing that was published or leaked about it seemed particularly interesting to me. But I got the new White Dwarf yesterday, covering the planetstrike releases and i have to say, i've been converted (what's not to like about flaming spaceship debris falling from the sky!) and i've been feverishly finishing off my drop-pod based Soul Drinkers in time for it. 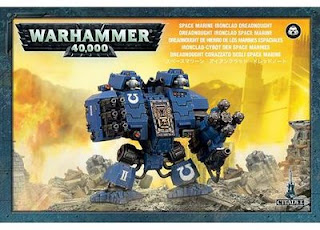 I wasn't convinced by the Ironclad when i got the GW preview email a month or so ago, with the banner and HK missiles, thinking it looked ugly in a bad way, with the overly bulky missiles, oddly patterned hull and banner. I think GW made a seriously bad decision when they chose which of the studio's models was going be sent out as a sneak preview, as i don't know about anyone else, but it nearly cost them my business in the dreadnought department.

But seeing the one with what looks like smoke launchers attached to its hull in White Dwarf, I'm convinced that the Ironclad kit might actually be worth £25 of my hard-earned money.

What's more, looking at the pictures in WD, it looks like the front can be left open, giving me the idea to model the wounded marine suspended inside, replacing the visor plate with clear plastic.

Dreadnought with fully modelled and painted interior is on the way! 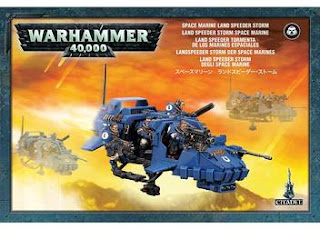 However, looking at the pics of the land speeder storm, i've realised that it doesn't come with a squad of scouts and, to make matters worse, the scout passengers you get seem to come it just one pose, as no matter what chapter they come from, all of them look the same. Damn. Conversion work is going to be needed.
Still looks cool though and i'm currently trying to figure out how to justify three of them in my Soul Drinkers army. Might even kitbash a few as Deffkoptas for my orks.

The terrain's been firing off all sorts of ideas in my mind too. I'm thinking of making a mountain fastness with two Bastions, a set of defence lines and a few bits of foam.

In other news, assault cannon armed razorbacks are going to be easy, what with the land raider accessory sprues being released next month. I picked a bad time to collect a themed army. I'm tempted to start a Salamanders army just to have all this stuff!
Posted by Khorneguy at 12:14 No comments:

Orks of all varieties

Thought i'd post up some pics of my orks. I apologise now for the poor quality camera work, but the flash is stuck on my camera and i can't turn it off, despite my many attempts.

Warboss Igork da Pirate Boss and one of his Nobz. I abandoned the greatcoat idea in the end and subtly converted a Black Reach Warboss. Note the peg leg. 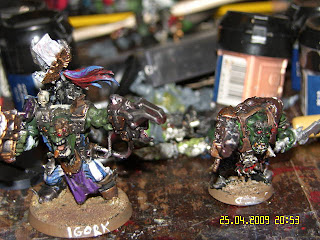 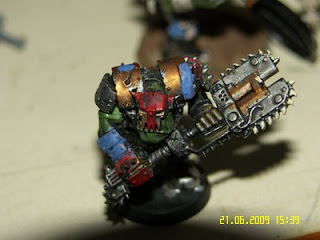 A Goff Rocker i found on the GW website a while back and just had to have it. Unfortunately i had no place for it in my army, so i use him as a Nob with Waargh! 'Banner 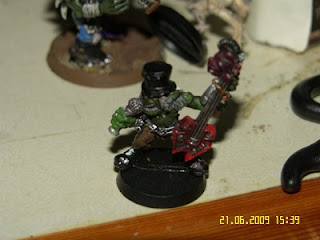 Nob Biker, converted from SM Attack Bike and official test model for the Bad Moon mercenary contingent of my army. 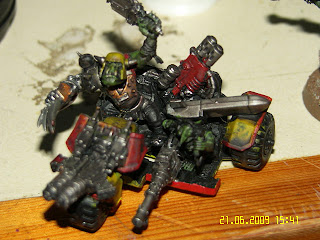 Posted by Khorneguy at 18:05 No comments:

Sorry for the serious lack of posts over the last 6 months, but i've been busy with work and personal issues. With a bit of luck, i'll be able to post something up every few days from now on.

Anyhoo, on to hobby matters.

I got bored yesterday afternoon and decided to make a Battle Fortress for my orks (as you do). Here's a WIP shot taken last thing last night. 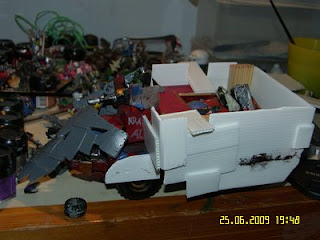 It's based off a toy JCB, then bulked up with plasticard and various parts from my bitz box. It's meant to resemble a pirate ship in some odd, round-about sort of way, hence the spiked prow.

I'm hoping to use it as the 'Dethrolla' Battle Fortress from Imperial Armour: Apocalypse, seeing as (ironically) the Deffrolla is an optional upgrade. Not that i'm going to pass up the chance to put one on it, but i'll wait for the Battlewagon upgrade sprue first, as i don't like the forge world one and don't fancy making my own.
Posted by Khorneguy at 14:15 No comments: