It looks like my Tau mini-project and larger Inqusition force need to be put on the back burner for a few weeks, owing to the fact that I have finally acquired something I have wanted for a long time.

When I arrived at my local gaming club tonight, a friend of mine gave me these: 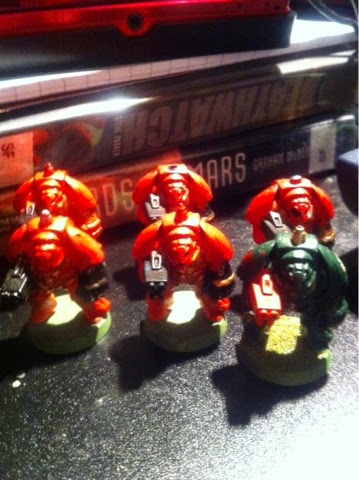 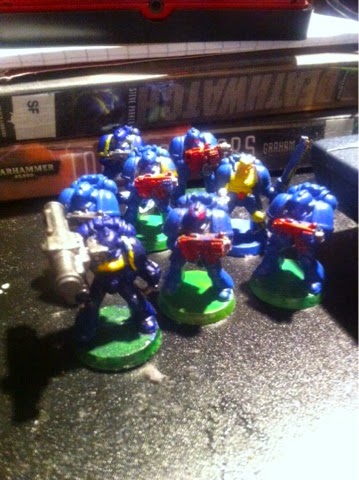 They're not the best of photos but I'm sure you can see what they are. Six Space Crusade Terminators and a 2nd Ed Tactical Squad. Both need to be stripped and have some TLC applied, but  they're still quite the find, especially as they didn't cost me anything!

I've been after the Terminators for years, but I've always been outbid on EBay whenever they come up.

I'm not sure how I'm going to use them yet, but the Terminators will probably going into my Sons of Horus or be used as Exo-suits in my fledgling Squat force. Either way they're going into the stripping tub tonight, ready for me to work on them on my free day on Wednesday.
Posted by Khorneguy at 00:09 No comments:

So I was rooting through a cupboard the other day and I came across some Tau I got in an Ebay job lot a few years ago. They really weren't in great condition, with about half an inch of paint obscuring most of the detail on them but I figured I could either try rescuing them, or I may as well just chuck them out.

So into the stripping tub they went.

After a week of repeated soakings and scrubbings, I finally hit bare plastic. The basic Fire Warriors and set of Sniper Drones seem fine and just need a repaint. The Stealth Suits were likewise and are likely to be siphoned off to become a set of Exo-Suits for my Squats, but the bigger Battlesuits need far more work.

From what I can tell from the parts I have, I've got one Crisis Suit and one Broadside, with one or two more possibly stashed away in some unknown cupboard somewhere. Both are missing their feet, some weapon systems and a few details.

This basically means I'd have to either order in replacement parts (not easy with me being skint and them being OOP) or scratchbuild a solution to the problem. I don't think I need to tell you which I chose.

Whilst pondering ways to rebuild the legs with what I had to hand, an idea hit me. Seeing as I have zero desire to collect an entire Tau force, these guys (if they ever see the tabletop at all) would be fielded as allies for my Inquisition, Squats or Space Wolves. This means I'd need to find some fluff justification for them being there. This brought me to the idea of Mercenary Tau.

Basically this force will have, for whatever reason, decided to put aside the principles of the Greater Good and are fighting for coin/ tech/ survival/ whatever. This would put them beyond the reach of tradition supply and repair lines, meaning they would have used whatever tech they had to hand to repair their gear. This will let me build mix in Imperial parts with the Tau and go to town with the conversion, whilst also giving me a strong narrative theme which I can tie in with my other armies.

Anyway, enough talking, here's my early progress on my  first rescued Broadside, with the legs rebuilt. I made it a little more spindly than the original model, partly to make it look non-standard, but also so I can use it as a counts-as Sentinel if I ever want to use it with my Squats. 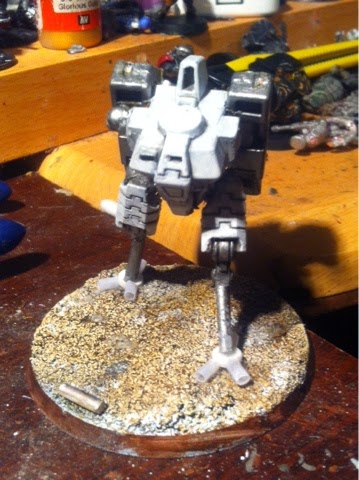 I'll post more soon.
Posted by Khorneguy at 09:55 No comments: