I said the other day that I planned to start washing and weathering my terrain over the bank holiday weekend. Well that hasn't quite worked out to plan. Between lacking the paints I need and being called into work tonight, it looks like I'm going to have to postpone my terrain session for a few days. It did give me an opportunity to use a terrible pun for a post title though, so it's not all bad news.

I decided to work on a couple of vehicles for my various forces instead. I normally hate painting vehicles, but I figured that seeing as I couldn't get on with what I want to do, I might as well try and churn out some stuff which I'd normally keep putting off.

First up, I got started on my Whirlwind Scorpius: 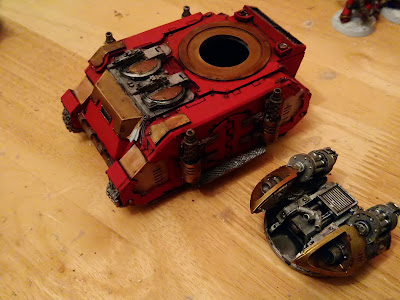 Considering the sheer amount of nooks and crannies this thing has, I think I've done pretty well just to get it to this stage in a single session. It's a deceptively detailed model. I need to crack on with it though, as I need it for when my local 30k campaign resumes in a month or two. Hopefully it shouldn't take too long to get finished though. Hopefully.

The other vehicle I decided to work on is a little random: 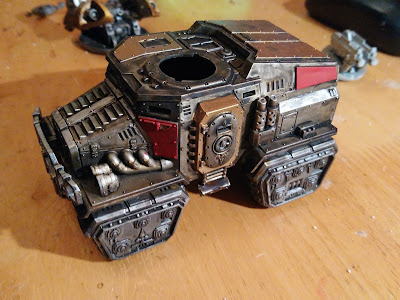 I bought the Scions 'Start Collecting' box a while back in order to use the infantry as conversion fodder, but I never really had any plans for the Taurox which you get with it. I just built it and forgot about it.

I found it again last week when I was rooting about for a bits to turn into terrain, so I decided to give it a quick silver spray when I did everything else. A few details blocked in and a couple of washes later and it's actually looking pretty good.

I'm not 100% sure where I'm going to use it yet, but I'm thinking it might make a sweet ride for Inquisitor Nearostaffen and his warband.

Not a bad bout of productivity for a bank holiday weekend really, especially considering that I couldn't work on what I wanted to. Hopefully I''ll be able to get back to my terrain later this week when I have some time off. I also need to get a Volkite Heavy Support Squad done for my hobby challenge and I probably should return to Fulgrim at some point too, as he's somewhat fallen by the wayside. I've got plenty to keep me busy. The looming spectre of Pokemon Regionals next month is going to eat into my hobby time quite a bit too, but hopefully I'll still be able to get plenty done.

My terrain building kick continues and really shows no sign of letting up.

This time I've built a larger terrain piece for Necromunda: 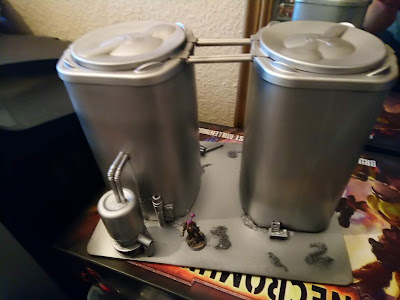 Built mostly from a couple of baby milk tubs and some drinking straws, I actually made this with a more practical purpose in mind rather than just simply going 'what can I build?'. I'm getting sick of being shot off the board every single game by my mate's Goliaths, so a large chunk of line of sight blocking terrain seemed like a solid investment. It also adds a bit of height to the board, making for some more interesting matchups.

This will be added to the pile of terrain to go over with washes and get finished up over bank holiday weekend. I'm actually getting quite a decent collection now for not a huge amount of time and effort. I'd almost forgotten how much fun it is to make your own terrain and I'll certainly be doing some more as time goes on.

Next step though is to buy some 28mm ladders when I get paid. As it is atm, very little of this terrain is actually accessible by models withoutg specialist equipment and I don't fancy my skills at making my own ladders. A trip to my local scale modelling shop should hopefully do the trick though,. If not, I'll be scouring Ebay to see what I can get.

After that I suppose I'd best actually get some Necromunda models finished to go with all this!
Posted by Khorneguy at 21:37 No comments:

It's funny what can be inspiring sometimes. For most people (myself included), seeing a well painted or converted model can inspire them to make something similar, or perhaps a particularly nice piece of terrain might spark off an idea for a project. This time though, something mediocre has inspired me to make something better.

If you've been around any Facebook hobby groups over the weekend, you'll have probably seen the pictures coming from the London Grand Tournament. If you haven't then I won't go over it in detail here, but the main take from the weekend was that the terrain was really bad. Like, really terrible.

Watching the uproar about the whole thing got me thinking. Terrain building has become something of a lost art. Between the GW terrain kits and the sheer volume of smaller terrain makers that are out there, we're a little spoilt for choice these days when it comes to pre-made kits, but when I got into the hobby in the early 2000's if you wanted terrain at all, you had build it yourself!

The problem is that a lot of people don't even consider the option of making their own terrain these day. Most people either buy the premade stuff or don't bother at all, just focussing on their armies. I'm pretty much guilty of the same thing. I've got at least 5 large armies for various systems knocking about my flat, but very little terrain.

So I decided to spend an evening upgrading my terrain collection.

Being something of a magpie, I've got a box full of interesting and useful bits which I've saved with the intention to turn it into terrain. This includes everything from coffee tubs to coasters, along with various scraps from kits I've built and other junk. I'm sorry to say that until now I've hardly touched it, but hope that'll change over the next few weeks.

After diving in and a few minutes messing about and I had myself a couple of basic silos made: 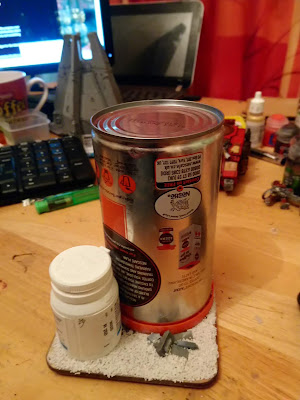 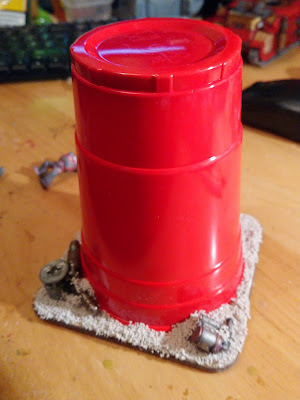 They were literally made by gluing a couple of tubs to some coasters and basing them like I would any other model.

They were looking a little scrappy, but a quick spray of paint later and they were shaping up pretty nicely: 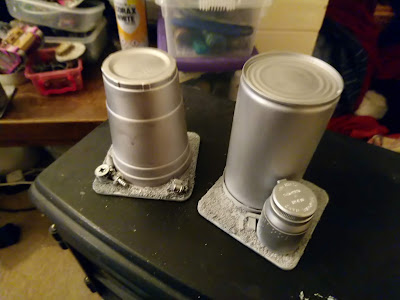 Whilst I was there I also sprayed up some bits and pieces I built last year and forgot to come back to: 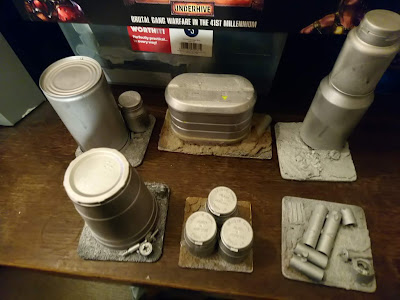 Not a bad collection for perhaps an hour's work at most. Obviously I need to jazz them up a bit, but even at this stage they're certainly passable. I'm going to probably spend a day or two over the weekend going over them with washes and adding some details.

I think I've proved my point though. Making terrain needn't be difficult or expensive. You just have to be a little creative with junk and you can have a workable terrain set very easily.

I'm probably also going to make some more this week if I get time. Me and a mate want to play some more Necromunda soon, so upping my terrain count seems like a good idea.
Posted by Khorneguy at 02:25 2 comments:

A Primarch and a bit

I haven't posted much  over the last few weeks. Real life has just gotten in the way a little. To make up for it, here's one hell of a progress post for you. I managed to get Horus finished on Monday night! 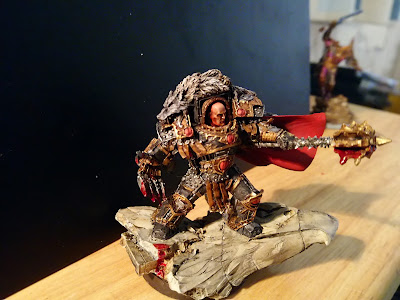 He took far less time than I expected to get done. I thought I'd be still highlighting and shading him for months on end, but he came together really quickly. I'm happy with how he turned out at least.

I went for a much darker, more savage feel to the model than many people paint him. This was partly due to wanting to do something a bit different, but also because my army is set post-Molech, where Horus' darker side comes fully to the fore. Having such a love for ADB's Black Legion series and read Khayon's descriptions of how Horus went completely off the deep end towards the end of the Heresy, I couldn't resist playing up those aspects of his character! 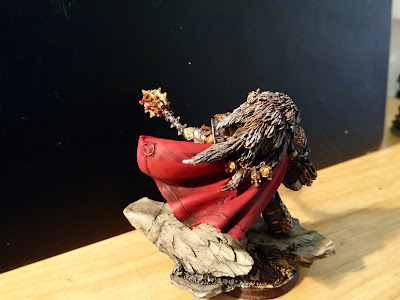 Although I love how he turned out in a general sense, I'm proudest of the look I achieved on his wolf pelt. I normally suck at painting fur, so I was a little apprehensive about approaching this, but after over a week of careful layering, washing and highlighting I'm pretty happy with it. I was thinking about putting flecks of dried blood in there to tie it in with his claw, but I figured I shouldn't push my luck, so I called it done.

So there you have it: my first Primarch painted. It's going to be far from my last though. In fact I've started painting my next one! 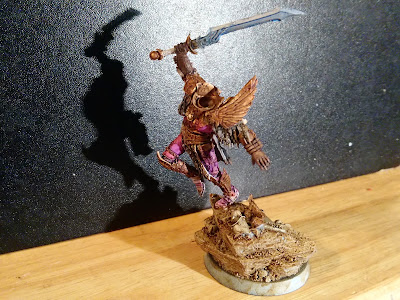 Fulgrim has always been my amongst my favourites of all the Primarchs, so I'm loving the chance to finally get him on my painting table.  I'm actually planning to make two versions of him, representing him both pre and post Daemonhood. Daemon Fulgrim is going to wait until I have the funds to indulge in the nessesary bits to convert him though. If I'm lucky, GW will beat me to it. Given what they've done with Mortarion and Magnus however, I might still prefer to make my own version.

Coming back to 'normal' Fulgrim though, he's going to be a slow burn project, weaved in between other stuff which I'm working on atm. This is partly because I want to take my time on him, but also because I have no reason to actually use him right now. Although I play Emperor's Children in 40k, the amount of models which I have which are usable for EC's in 30k is actually pretty small. I want to finish up my Thousand Sons and spruce up my Sons of Horus before I launch into the 3rd Legion properly.

I'm pretty happy with how he's shaping up so far though. The real pain will come when I go to highlight all that gold! I didn't even realise just how much filigree there is on him until I'd started on the base colours for the pink and noticed a load more on his legs which I'd completely missed. There's probably even more in there somewhere which I've still missed, so it'll be an interesting journey of discovery as I paint.

That's all for today. Hopefully I'll be able to muster the energy to be a little more productive over the week so I can post some more, but I seem to be in a bit of a lull atm hobby-wise, so I'll have to see how I get on.
Posted by Khorneguy at 09:22 No comments: