The picture pretty much speaks for itself. It's the new White Dwarf subscription model. It's a Squat! Not a dwarf, as most people thought. It's got a boiler suit, servo-arm and space helmet. 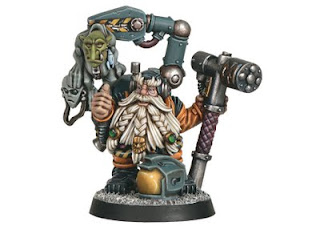 Ther big question though, is whether this is a one off model or are they on their way back. I'm guessing, considering the 'squats and space dwarves never happened' stance of GW until now, is that it's unlikely to be a one off.
Posted by Khorneguy at 18:38 1 comment:

The WD modelsfor 2010 looks very squat-ish to em. And it's on a round base, so can't be a dwarf. Unfortunately, i didn't get a pic in time, so we got to wait for it to be published. Well they did say they were unveiling something big for games day, and that seems to be the only thing that fits the bill.

Speaking to Graham McNeill, he said that the next Ultramarine book will have the ENTIRE chapter going to war. This will be amazing if done right, even if it is smurfs. I don't think anything like that has been done outside of HH.

Little titbit of info for you. After a chat with the WD team, i found out that majority of the models used in WD battle reports are actually early resin castings, as the restraints of working so ahead of time often means they don't have the plastics yet (they're working on february's issue atm). Also, for the same reason, they often don't have access to final drafts of rules, meaning points costs and some rule wordings are off.
Basically this means that you shouldn't turn to WD battle reports for resolving rules/ wording issues with a new codex or army book.

If you look in the back of the free BL preview booklet, it talks about a Raven Guard HH audio book on the way, called Ravens Flight, detailing the events of/ directly after the Istvaan Drop Site Massarce, as Corax tries to escape the carnage. Should be interesting.

More as i remember it, folks. I forgot to take notes, haha!
Posted by Khorneguy at 21:52 3 comments:

This is stuff i gleaned from my GD experience

Just got back from UK GD and i don't know what you guys have heard, but i got the following...

Contrary to what people were led to think, and what GW store staff were told, the SW codex was not on sale, although there were plenty of display copies about. I had a look and it looks immense and non-broken

I spoke to Kenton Mills at the Forge World stand about the possible evolution of design for the Ork Mega Dread into Knight class titans and he said they were a possibility, but if that happened, they'd be in a book based around Ad Mech. Same for the Warlord Titan.

Speaking to Jervis Johnson about various things, I found the following:

Dark Eldar are still in works, no definate date for them yet, but he once again mentioned redoing the models from the ground up, interestingly,talking to him about my own Dark Eldar army, he said that he 'hoped' that the models i own would still be usable in the new 'dex. Make of that choice of words what you will.

No more GW design podcasts, instead he said he's 'leaving that up to the community who have the expertise for podcasts'

When asked about any upcoming Dark Elf plastics, he said he couldn't say, but then went on at great length about second wave releases. Hmmm...

Interestingly, there were very few dark elf items at the sales stand, with no chariots, manticores, dragons or harpies etc and not a single blister pack(possibly indictating a withdrawal of products ready for new plastics)I also was informed that manticores had been moved to the collectors range when i asked for one. Since when has that been like that?

There is an Ultramarines CGI movie on the way.

I found an interesting WIP that a forgeworld staff member describes as like a Valkyrie for SM's, sort of like an orbital lander. Apparently, he's waiting for it to be approved by the forge world head honchos. 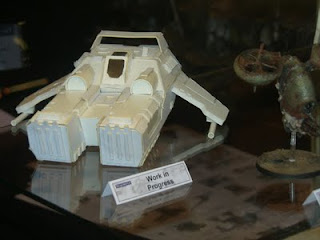 Tyranid codex is confirmed, but thanks to BOLS, you all know that already. Hope they improve the cover 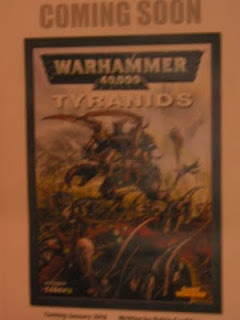 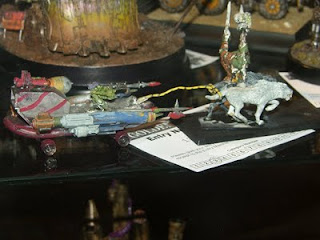 More GD pics to come
Posted by Khorneguy at 20:53 No comments:

I woke up this morning/lunchtime to an email from my local gaming club organiser, reminding me that the fantasy battle league starts tonight. It's a 1500 pts league and i have just under 700 points of Dark Elves, as i can't use my black dragon at that level.

Most people would've just given up at this point, citing time restraints on constructing such a force, but note me.

Reading the email, i realised that the models only have to be built, not painted. I also have about £200 spare cash sitting in my bank account, doing nothing at the moment, as i was saving it for Games Day this sunday. Therefore, if i dip into that fund and if I can put up with an infantry-based list for a few weeks, then i reckon with a monumental effort, i'll be able to get a (at least usable) army together in time for 7pm tonight, even if it's not going to win me any games.

With this in mind, i'm off into town to pick up the following

2 boxes of warriors, to be build as crossbowmen
1 box of corsairs
1 box of cold one knights
1 Manticore
Hopefully 10 executioners, or if my FLGS doesn't have them in, i'll go without for this week.

Wish me luck, i'll post up the results
Posted by Khorneguy at 10:52 No comments: 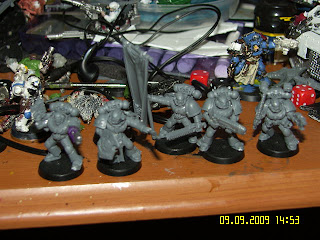 This command squad is part of an ongoing commission for a gaming buddy of mine, who's just getting into 40k, but only has time to game, rather than build and paint.

So far i've painted up the contents of Black Reach for him and i'm expecting a Land Raider to be handed to me any day now, which should be interesting, as my own land raider ended up as an ork battlewagon. 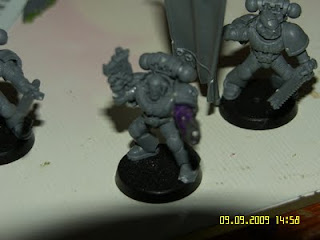 He wanted to keep the feel of the command squad relatively low key, hence the lack of ornate shoulder pads, etc. He also didn't like the knight-like head for the company champion, so the champion has a normal SM helmet. Unfortunately, my computer ate the close-up pic of the champ, so i can't show you properly. 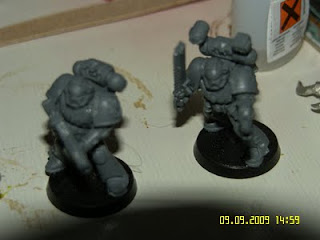 He requested that the Sergeant had a plasma pistol, so i raided my bitz box for that one, but other than that, it turned out rather nicely straight off the sprue. With no green stuff work involved, this project is a nice shift of focus for me. There's something very satisfying about making great looking models straight off the sprue, with no modding work to 'jazz them up'.

All that remains now is to file off mold lines and paint them up. Then i can move on to Space Hulk, woop!
Posted by Khorneguy at 14:16 No comments:

Out of production, my arse!

Got back from Holland on monday and it's taken me this long to recover. I had an... interesting time

Right off the bat, The Wandering Mind is staying as blog title. I've decided for all the reasons i listed last week, plus the feedback I got, that the name is far cooler than anything else i could come up with, so it stays.

Now on to the reason for my post. One afternoon whilst I was in Wassenar, Holland (about an hour train ride from Amsterdam) I took a wander through town. I spotted a Games Workshop sticker in one window so I decided to look in. Much to my surprise. I found this beauty for sale on their blister pack rack! 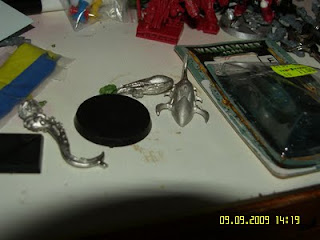 For those of you that don't recognise it, it's a classic Zoanthrope that's meant to have been out of production for three or four years now.

Unsurprisingly, I bought it on the spot, as i knew that i'd have Space Hulk waiting for me when i got back to the UK and i'm planning to convert the genestealers so they could be used in 40k too (i'm covering this in a future post). But looking through, it would seem that the place hadn't taken a delivery of blister packs for years. I saw the classic space marine commander blister (the one with axe and combi-weapon) and Killa Kans still being sold as blister packs, instead of boxes. It was like stepping into a 40k time warp. Now, i don't know what the deal is with european countries and supply from GW, but isn't this a little strange. Can anyone shed any light on it for me?

I'll say this though. The older Zoanthrope looks a lot easier to put together than the newer one. i've already got two of the more recent ones and i've found that their huge heads tend to make the model very top heavy, so i have to stick stuff to their bases to keep them upright in a game. The classic one however, has better proportions and can even be put together without the carapace, making for some very cool conversion oppotunities. I'll let you guys know how i get on.
Posted by Khorneguy at 15:27 1 comment: