Remember I mentioned in my last post about how I've had a really crap couple of months? Well things got even worse from there. Without going into too many details, I really needed to cheer myself up and had some birthday money burning a hole in my pocket, so I decided to break my self-imposed rules on hobby purchases and treat myself to some models. 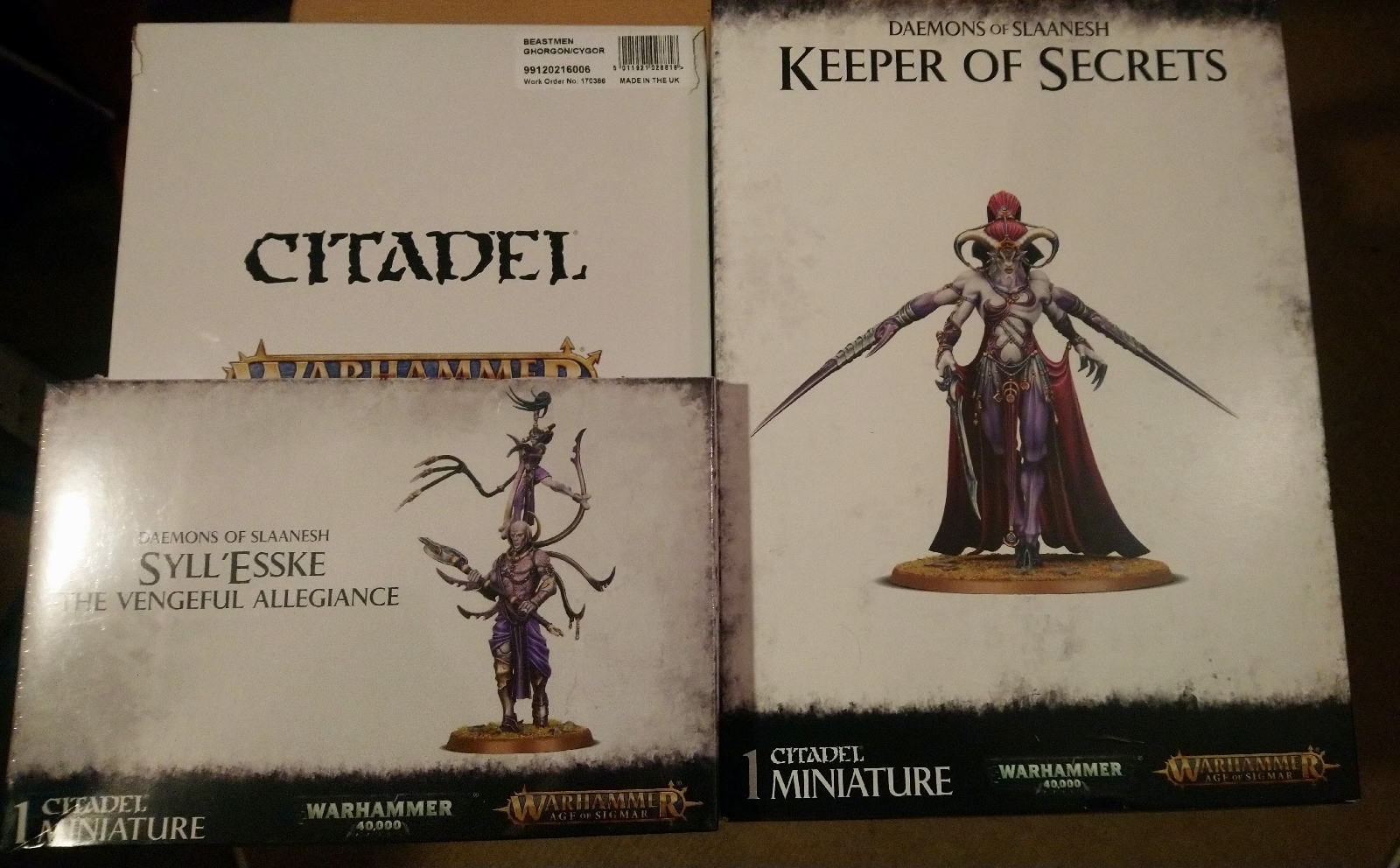 Just a few 'little' bits. To be fair, it's stuff I've been wanting for ages and I needed the dopamine hit which comes with a plastic crack delivery!
The Keeper of Secrets is a model I've been after ever since it came out. It's such a gorgeous sculpt, but I've just never gotten around to picking it up until now. I just hope that I can do it justice with my painting skills.
I got it assembled pretty quickly. I even started painting it: 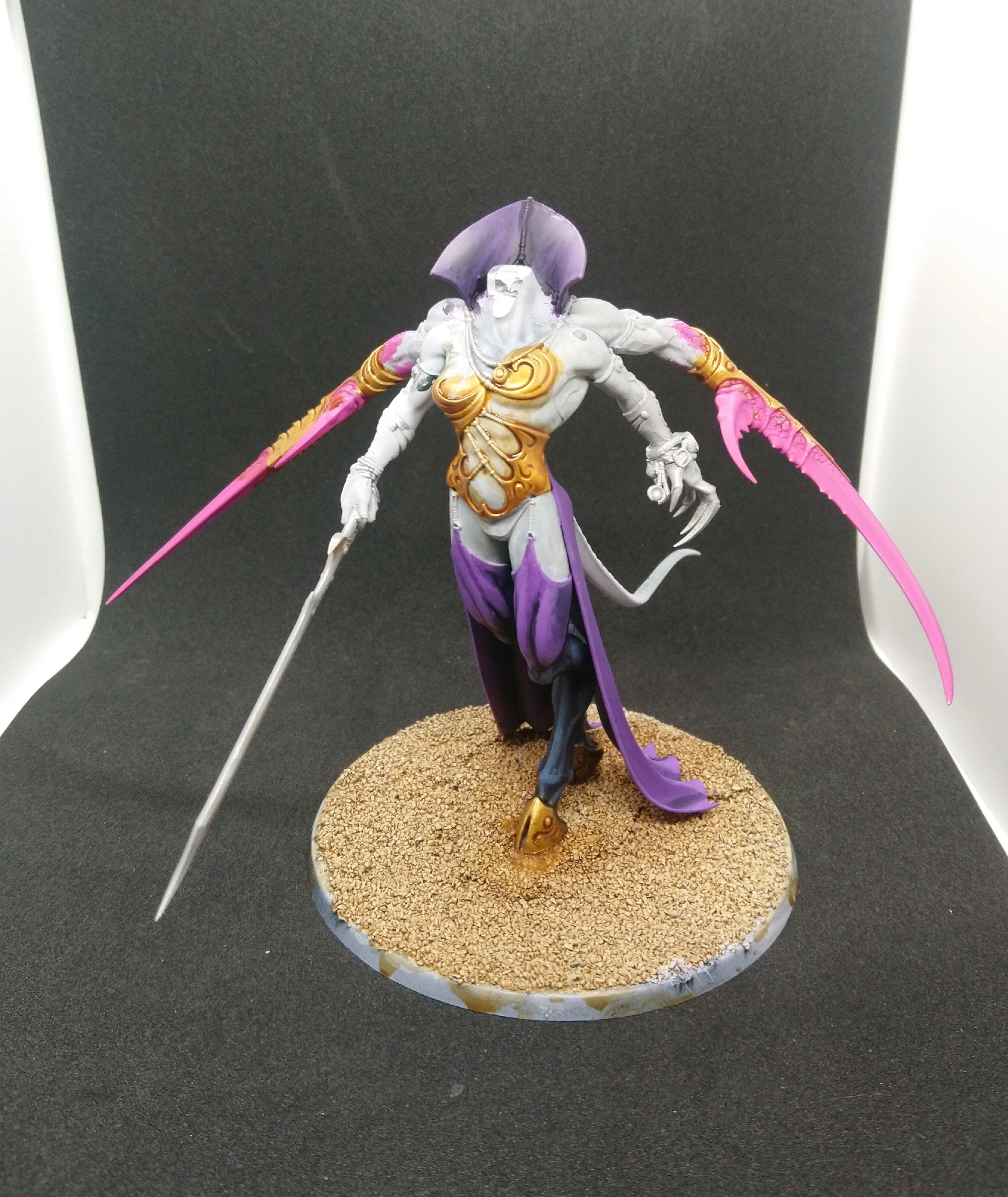 I don't thinking I've done too badly for a couple of evening's worth of work. Still a long, long way to go though. 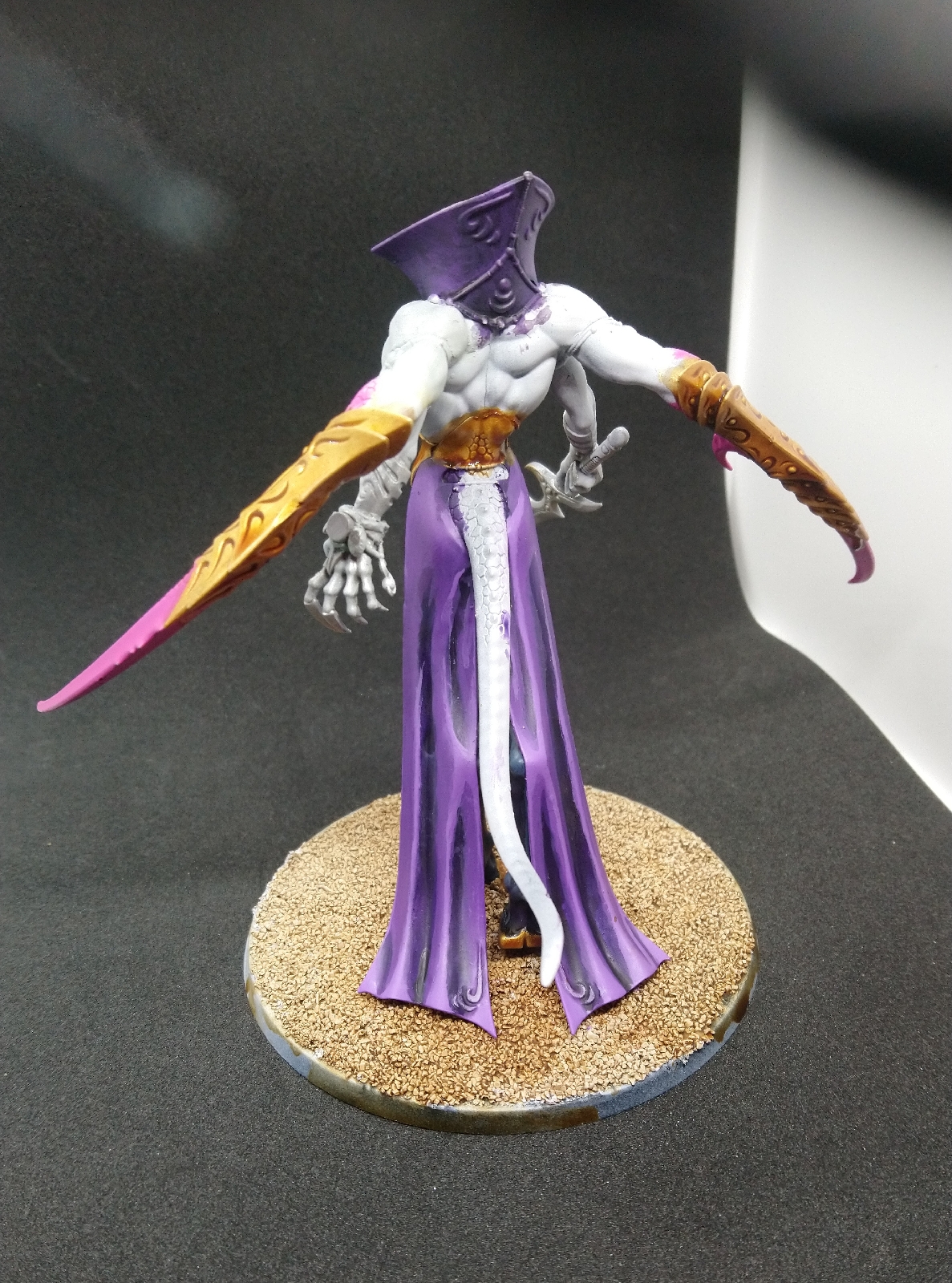 I'm actually quite proud of how the layering on the back of the skirt is shaping up. It's looking a little rough atm, but it's heading in the right direction and it's not normally something I do well on a large scale. Even as I write this though, I'm coming to the horrible realisation that most of my hard work isn't going to be visible once I attach the outer cloak. Sad times.
In between layers on that though, I've been working on something a little more... unusual: 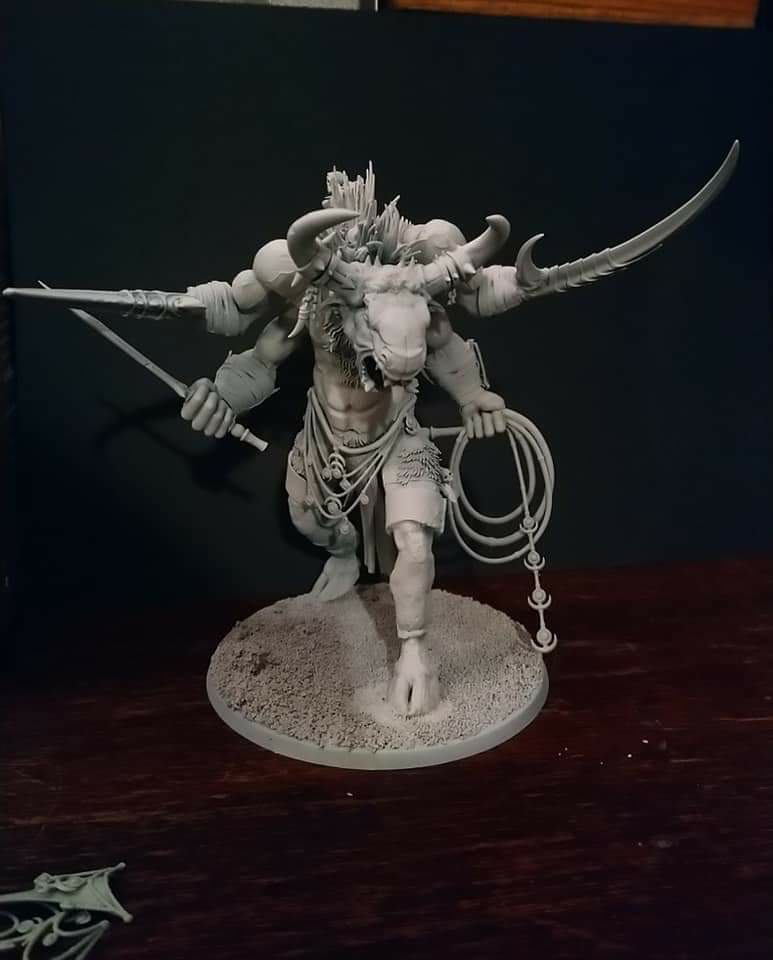 I wanted my second Keeper to be a bit different to my first one, plus I wanted to create something which paid homage to the classic 80's Keeper, whilst still working in the modern game. Thus this abomination was born!
If someone had told me I'd be spending part of this lockdown sculpting thigh high boots on a sexy cow Deamon, I'd have laughed. Yet it seems I've reached that particular stage of craziness. 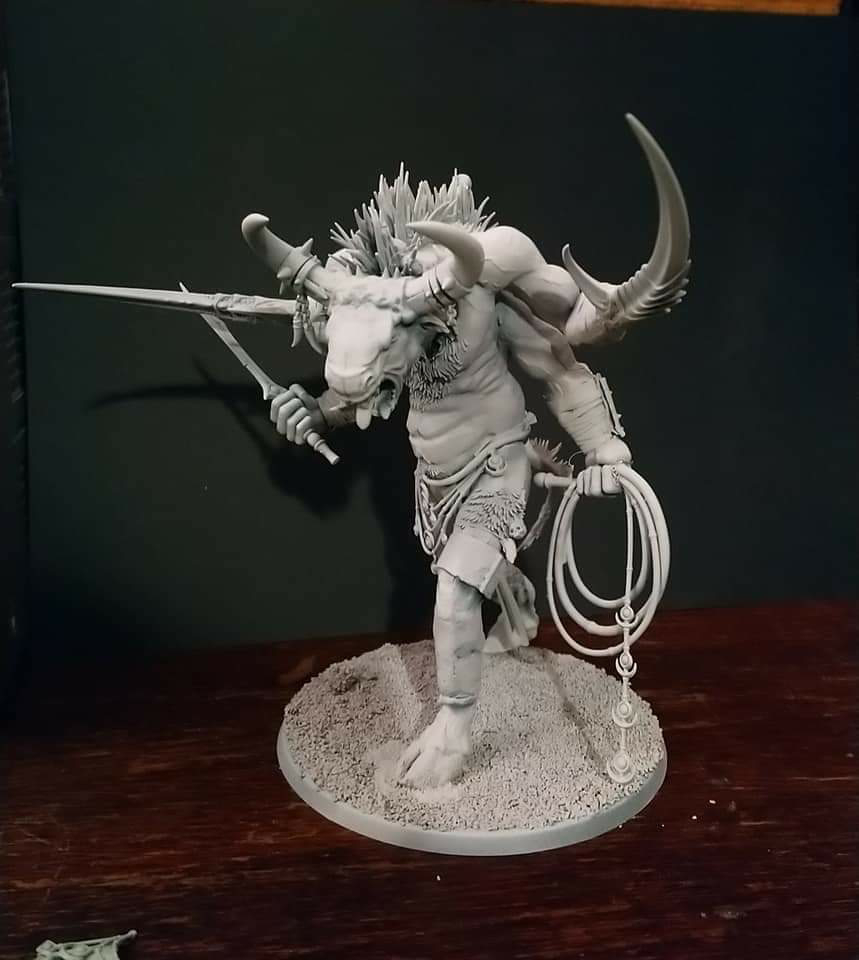 It was actually pretty simple to convert. Working from the AoS Ghorgon kit, most of it was created using my leftover bits from the 'proper' Keeper. I'd say that trimming the Keeper claws to fit over the existing wrist guards were the most complicated part of the process. That was more time intensive than hard to do though. 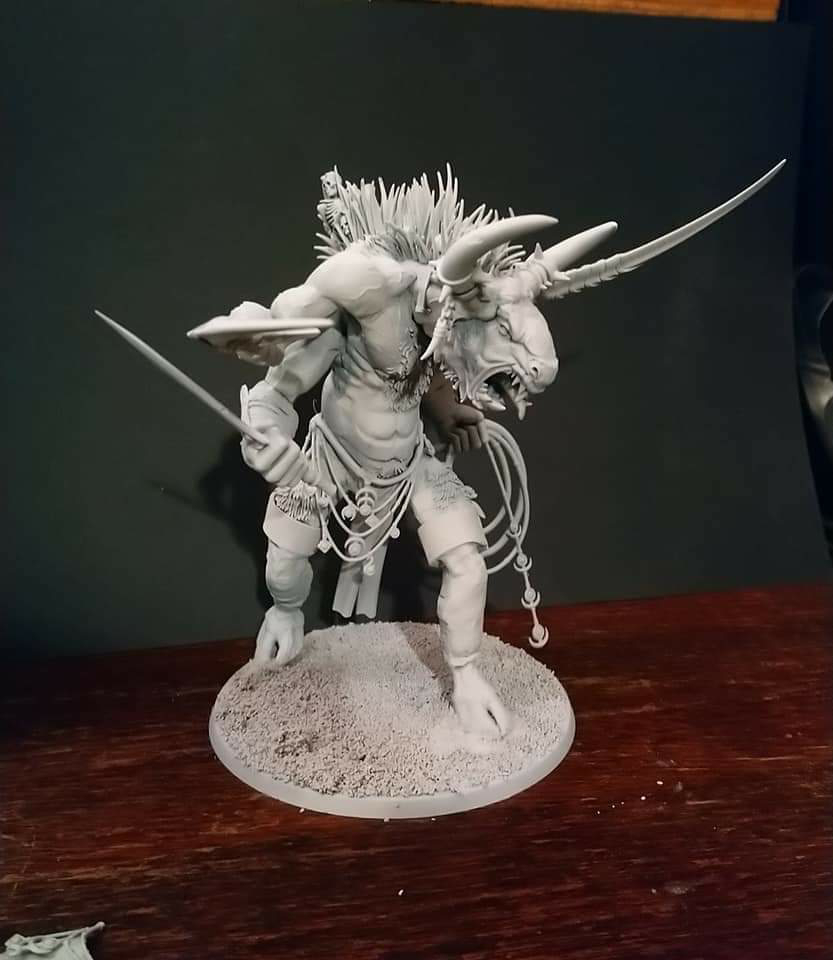 The boots themselves were pretty easy to create. I just smoothed off the lower legs, attached a hoop of plasticard to form the top of the boot, then built up layers of Green Stuff and Liquid Green Stuff to form the rest of it. Fairly basic, but I think it looks effective.
Looking at the photos, I might go back later and add some more bulk around the ankles, but I'll have a think about that. I've got a lot of work to do before I get around to painting it.
Oh and finally, as if I didn't have enough big models to be working on right now, my mate's also asked me if I could paint Mortarion for him. Like a fool, I agreed!
I'm not entirely sure why I accepted the commission, especially as I've got three big models to work on already sitting on my painting desk. I guess I just wanted a different style of model to work on for when I want a break from painting Slaanesh stuff. The Keepers are going to require me to carefully build up many thin, smooth layers, whereas Morty lets me do something a bit more grimy and 'grimdark', as well as have fun painting a lovely sculpt which I'd never buy for myself. I may regret my madness, but so far it's been fun to do.
I've actually made some decent progress already: 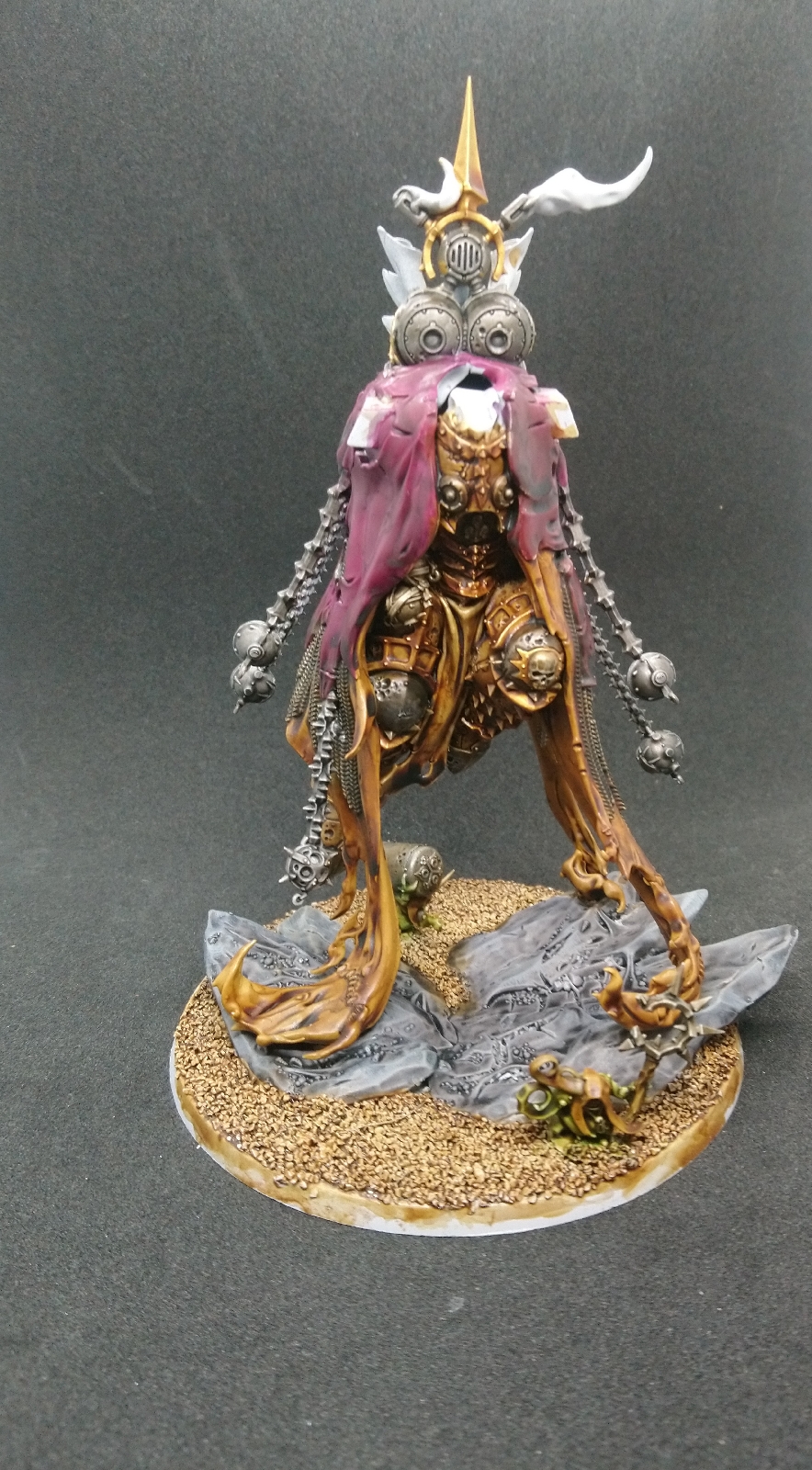 It's not the best of photos. I'm still getting used to photographing big stuff in my light box, but it'll do for now. I'm going for a much grittier and down to earth colour scheme than I normally see him painted in. It's taking bloody ages and there's obviously a long way to go yet, but I'm happy with how he's shaping up so far.
As you can imagine, pretty much all my hobby time right now is being poured into these three models. It may make for some very repetitive future updates, but at the rate I'm going, I should actually get through them reasonably quickly.
This ended up being a much longer post than expected, but that's not a bad thing. It just goes to show how much I can get done when I get bitten by the hobby bug!
I'll post more soon. Until then, stay safe and happy hobbying!
Posted by Khorneguy at 12:32 No comments:

It's a few days later than I planned, but I'm back with my promised progress post.
I had a pretty productive Birthday hobby session. I managed to get all the transfers down and finish off the squad which I wanted to get done. It took far longer than I expected, but I suppose that's what I get for doing custom heraldry for every unit in the army!
Anyway, may I present Intercessor Squad Autereus of the Crowned Blade Brotherhood, Golden Knights chapter. Done and dusted: 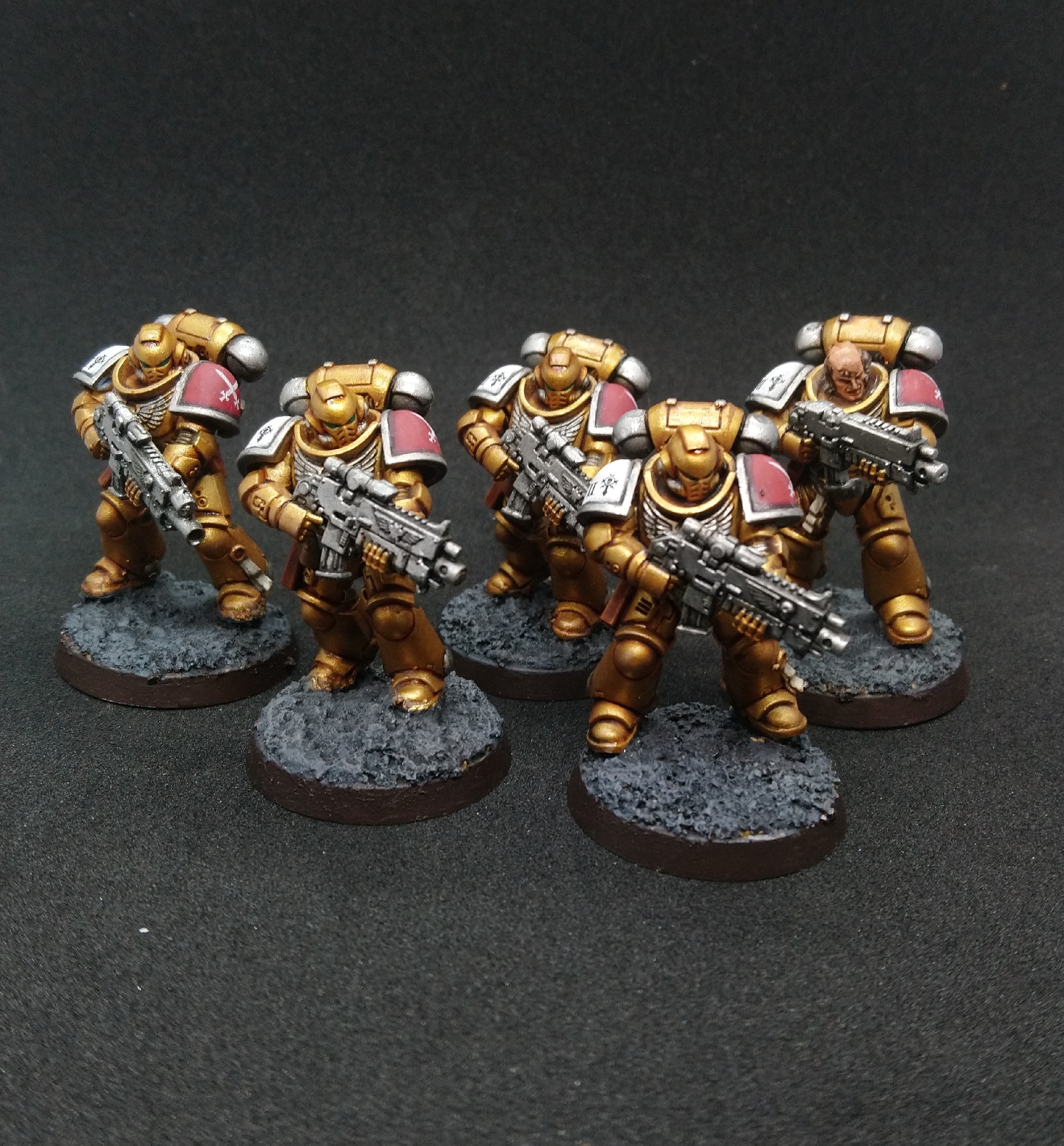 I'm really quite proud of how these turned out. I'm enjoying really taking the time to put the love and care into the army which I feel they deserve. It was also a lot of fun working working out squad markings and the meaning of all the symbols in the context of the wider background of my Chapter. It does mean that my marines are turning into a far longer term project than I anticipated, but I don't mind. It really lets me indulge my inner world builder.
I've decided that I need a project that's a bit more of 'quick hit' alongside it though, so I don't get too burnt out from my slow progress. Because of that, I decided to dust off my  Slaanesh Deamons and get them up to scratch.
I shelved them originally because they were pretty terrible under 8th Edition and I was putting a lot of effort into an army which was losing every single game. I've always been a very casual player and not cared too much about that kind of thing, but it was still pretty demoralising.
Fast forward to now though and apparently Slaanesh is pretty good under 9th. About damn time, in my book. Typically it happens just as we're not allowed to go out and game though!
Naturally I'm planning to be a hipster about the whole thing and point out that I was playing Slaanesh before it was cool. I can't really do that when my army is only half painted though. That brings me nicely back to my side project.
I've decided to spend some time to finally finish up my deamons. I've actually gotten off to a pretty good start: 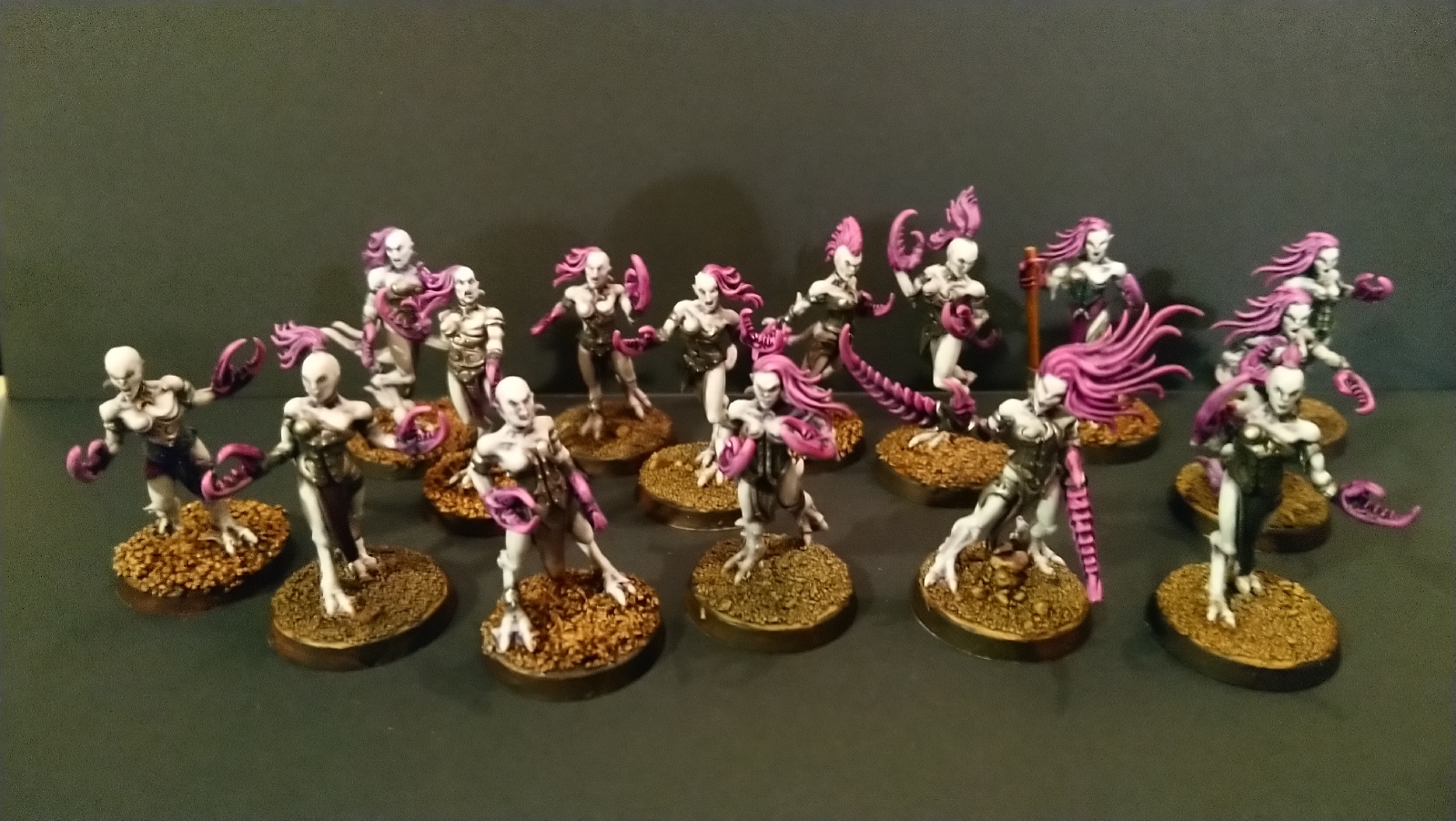 That's fifteen brought up to a standard I'm happy with, painted over the course of roughly 6-7 hours, split across a weekend.
That's not too bad I'd say. At that rate, I reckon I could get the 60ish Deamonettes I own done in a month or so. Of course this is me we're talking about though, so it's likely to take longer than that due to my tendency to get distracted. My point is that it's a pretty quick scheme considering the amount of layers involved on the white skin.
After that I'll need to buy some of the new kits, as my two Keepers of Secrets have been demoted to Deamon Princes due to size changes, plus I'm wanting Syll'eske and a Contorted Epitome. That's really not too much of an issue, considering how the new plastics are so gorgeous. It does, however mean that I'll be breaking my self imposed rule on not buying more models, but I've had such a crap couple of months, I can probably bend the rules a little. I reckon I deserve a treat to cheer myself up a little bit. Plus I've been tearing some pretty sizable chucks out of my backlog recently, which was the point of the exercise in the first place.
Enough rambling though. I can definitely feel my hobby mojo starting to return and it's been great to get a decent sized post up for the first time in a while. I feel like I'm going to be quite productive in the next week or two. I've been wrong before, but watch this space. I should be back soon.
Stay safe and happy hobbying!
Posted by Khorneguy at 08:58 No comments: