Just a quick one today. I just wanted to share some musings on how I'm planning to try and clear my hobby backlog.

I've decided I need to be more organised in the way in which I hobby.

Some of you might remember that at the start of the year I pledged to get some fully painted armies finished by the end of 2019. It's a great goal to have and somewhat aided by my resolution to only game with fully painted models.

The huge problem with that plan is that I'm a a massive hobby butterfly. The name of my blog should have tipped you off to that one. I go to sit down to work on a project and more often than not get distracted by something else which catches my attention. As a result I do a lot of hobby, but not much actually gets finished.

So how do I solve this? Well I listen to a lot of hobby podcasts and one of them came up with an idea which might actually work. Someone on the Independent Characters podcast mentioned using a workflow app to help track their hobby projects, listing all the stuff they have to do and moving them through the columns as they complete them.

I figured it's worth a try so I downloaded Trello onto my phone and made a list of all the hobby projects I've got to do and half finished projects which I know I have laying around: 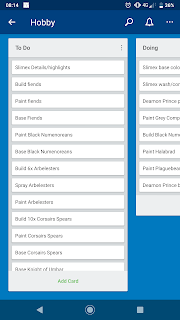 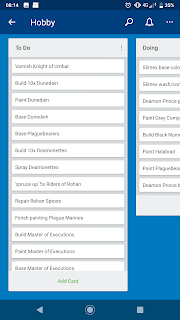 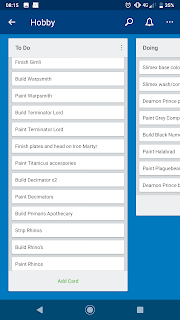 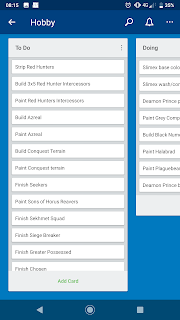 Yes, there's a lot of them. That's not even half of my backlog!

I broke each project down broadly into building, painting and basing. I broke some of them down even further, depending on what they were. Some of them are silly little things which I never seem to ever get around to doing like 'stick Missile Launcher on my Dreadnought'. Others are as vague as 'paint this squad', but everything's on there. When they're done, I just need to move the task to the 'done' column.

The theory is that as long as I'm working on something on that list when I sit down to do hobby, I'm making progress on clearing my backlog, as well as giving me ome kind of visual reference point on how much progress I'm making beyond the painting points which I already do. It also forces me to think before I get distracted and start on something new.

Once I've ticked off 20-30 of these tasks, I plan treat myself by buying something new. By then I should have made enough positive progress that it'll be a net gain on my painting points.

I think it's a pretty solid idea, although there's really only one way to find out if it'll work.

What do you reckon? How do you organise your hobby and stay on track with things?
Posted by Khorneguy at 08:42 2 comments:

A rambling and non-exhaustive experiment with Contrast

I'm going to be setting some time aside to try and actually get some blogging done. I find running this blog really rewarding to do, but the problem is that it becomes too much of a chore when I start falling behind. In theory if I can catch up on things, it should keep the flow of motivation going. That's the idea anyway.

I've actually been up to a fair amount of hobby recently, but to be honest the main project on my painting table atm isn't even my own models. I managed to bring a friend into 40k in the latter half of last year through the Conquest magazine subscription, but he really doesn't have much time to paint anything due to family commitments. So I offered to step in and get some stuff done for him.

I will admit to a couple of ulterior motives here. Firstly, it's an excellent excuse to have an experiment with the Contrast paint range. It's also a cheeky way to bump up my painting points!

Regardless of my other reasons though, helping a mate get his army painted was my main reason for doing this. Being able to play with two fully painted armies on our gaming nights is really nice thought. Plus it lets me paint something completely different to what I normally work on. I've been feeling the early signs of burnout on my painting recently, so hopefully a chance of pace and style will help me with that.

Anyway, onto the models.

I started with the basics. Poxwalkers are being used in GW stores to demonstrate the new paint range, so I figured was a solid place to start: 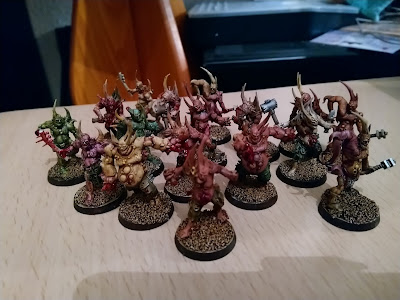 These were already half done before Contrast was even announced, using the traditional 'base, wash, highlight' method. It was such a laborious process though that it was taking forever, even for such a basic paint job. With Contrast, all it took was quick blitz with Militarum Green, Gulliman Flesh and Magos purple and I was able to finish them up in a matter of hours. I followed those with a few quick drybrushes, picked out a few details like the boils and guts, then just added a bit of Blood for the Blood God and I think they look pretty good. They're certainly not going to be winning any painting awards, but they're a decent tabletop standard.

Tbh this kind of thing is what I see as the main use I'll be getting out of the new range. I'll probably end up using them to skip the boring and tedious stages in a paint job, but then going over them and finishing them off with more traditional methods. It'll be used to speed up what I was doing already, instead of replacing it.

Next I decided to see what it could do on Marine armour, so I decided to apply Militarum Green over the Waywatcher Green base colour I'd been building up on one of his Plague Marines: 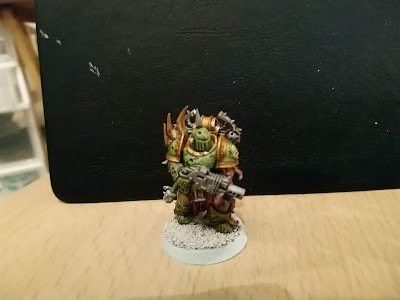 I think you'll agree that it looks pretty effective! Considering the Waywatcher 'preshade' I'd applied, it wasn't really any quicker than my previous method, but it gets a far more consistent result than I was getting with the Colea Greenshade layer I was going to add next. 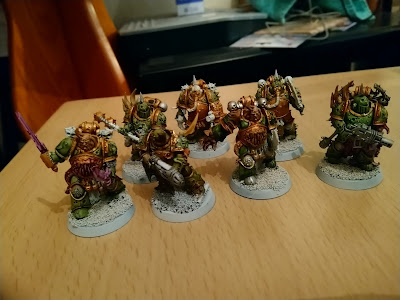 The armour, skin and mutations were all picked out in various contrast paints, whilst the gold was done using more traditional methods. They're obviously still a work in progress, but the ability to add awkward colours easily means that I'm actually feeling motivated to push forward with them, rather than seeing those stages as something to be dreaded.

Next I decided to give it a try over existing washes. This was what I was most excited to attempt, as I do a lot of painting with washes over a simple white base coat, so I was interested to see how I could improve on that method: 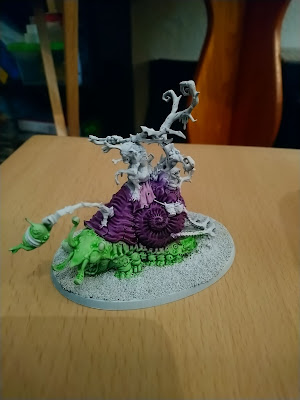 The shell on Slimex's snail was just Magos Purple over a couple of layers of Druchii Violet, As you can see it's made a really solid and vibrant result. It seems to have just enhanced the colour rather than overpowering it. I might still go over it with a bit of a drybrush, but I'd be happy just to leave it at that stage tbh. I'm probably going to paint the rest of the model using non-Contrast techniques tbh.

So all in all, I'd say Contrast is definitely a useful tool in my painting kit. I don't think I'd ever paint a model just using Contrast as many people are doing, but it's certainly going to improve what I'm already doing.

One thing I definitely want to try next is using it over metallic basecoats to see how that goes. I've seen a lot of people produce some excellent results doing that, so I've got high hopes. That will have to wait though. I've got way too many projects on the go atm to veer off into that particular rabbit hole right now.

That's all for today. It wasn't the most comprehensive of posts, more just some random musings and experimentation. Hopefully I'll find the time to post again soon. Like I said earlier, I want to try and get a regular posting schedule up and running. Fingers crossed that I succeed!