Thing are going to get loud!

After my pretty massive progress post last time, I decided to swap quantity for volume: 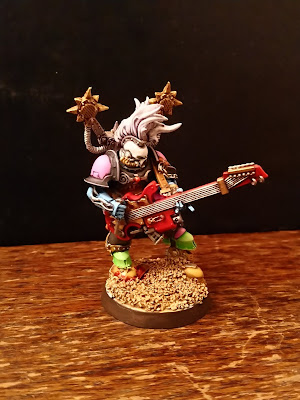 It's a terrible pun, but I'm not even sorry!

It's a shame he doesn't come with a unique datasheet, as a model this nice really shouldn't be relegated to being a simple squad leader. As such, he's going to be use in my army as either a Sorceror or Dark Apostle as needed, inspiring the troops with his sick solo skills!

I'm really happy with how he turned out, as I was a little nervous I couldn't do the sculpt justice. Now I just need to settle down and wait for the plastic Noise Marine kit to drop.

Next up I'll be cracking on with the Necromunda stuff which I mentioned last post: 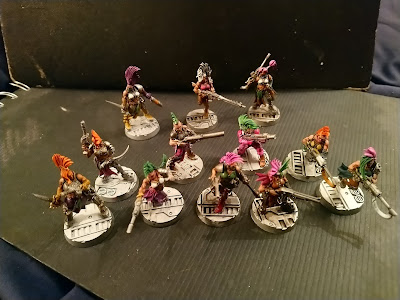 As you can see, there's not really much to do on them. It's mostly just working on their bases, so hopefully they'll be finished up pretty quickly.

With so many projects being finished up atm, I'm really on a hobby roll. Hopefully I can keep this going.
Posted by Khorneguy at 21:33 3 comments:

Once again I haven't posted up here for a while. One of my New Year's Resolutions is to get back into the habit of blogging again on a regular basis, so hopefully that'll improve.

My second resolution is to try and clear my hobby backlog and bring my painting points back into positive figures, as it's getting to quite silly levels again. Easier said than done, but there's not much coming out soon that I'm aware of which could derail me too much. It's also mostly giving myself a little push on projects to finish them off, so shouldn't be too hard.

So to kick things off, here's my first completed models of the year: 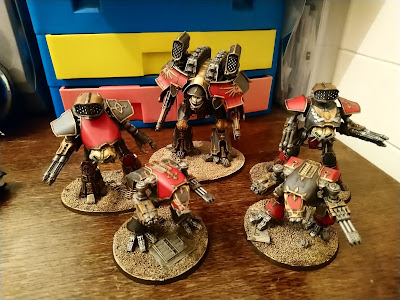 I've been working on my first Maniple for Legio Mortis on and off ever since Titanicus relaunched back in the summer, but my tendency to be a hobby butterfly meant that I kept getting distracted. The Warhounds alone have been staring at me on my hobby desk for the past two months!

In the week or so from since the new year, I've been putting in a little work on them every day and I'm really quite pleased with the results. They're fully done now, save for applying decals, which will be ordered when I get paid.

I'm particularly happy because my third resolution for this year is to only play with fully painted models wherever possible. Not only will that help me clear my backlog like I want to, it should also hopefully help me stay focused.

Next up will be my Necromunda Eschers, ready for a campaign which is starting up at my local gaming shop in the next couple of weeks.
Posted by Khorneguy at 10:43 No comments: