Between messing about with my Orks and a personal project I'm doing for a friend, I've had a distinct lack of finished models to show off in the past couple of weeks. Not only is that bad news for my backlog, it's also terrible news for my motivation to attack said backlog. I've always got to feel like I'm making progress or my hobby mojo has a tendency to dry up on me.
My solution was pretty simple: carve a chunk off my negative painting points by going for an easy target.
That's how I ended up painting 32 Poxwalkers over the course of two evenings:

They were pretty easy to do. I mostly used washes and Contrast to go for a quick and dirty style, then using Blood for the Blood God to give them a little 'pop'. They've been on my To Do list for a couple of years though, so it feels pretty good to get them done.
After these, positive painting figures seems actually within pretty easy reach, despite my recent purchases, so I might take aim for a few more easy targets before I do anything else.
I'll decide on that later though. I also got my first couple of Orks done: 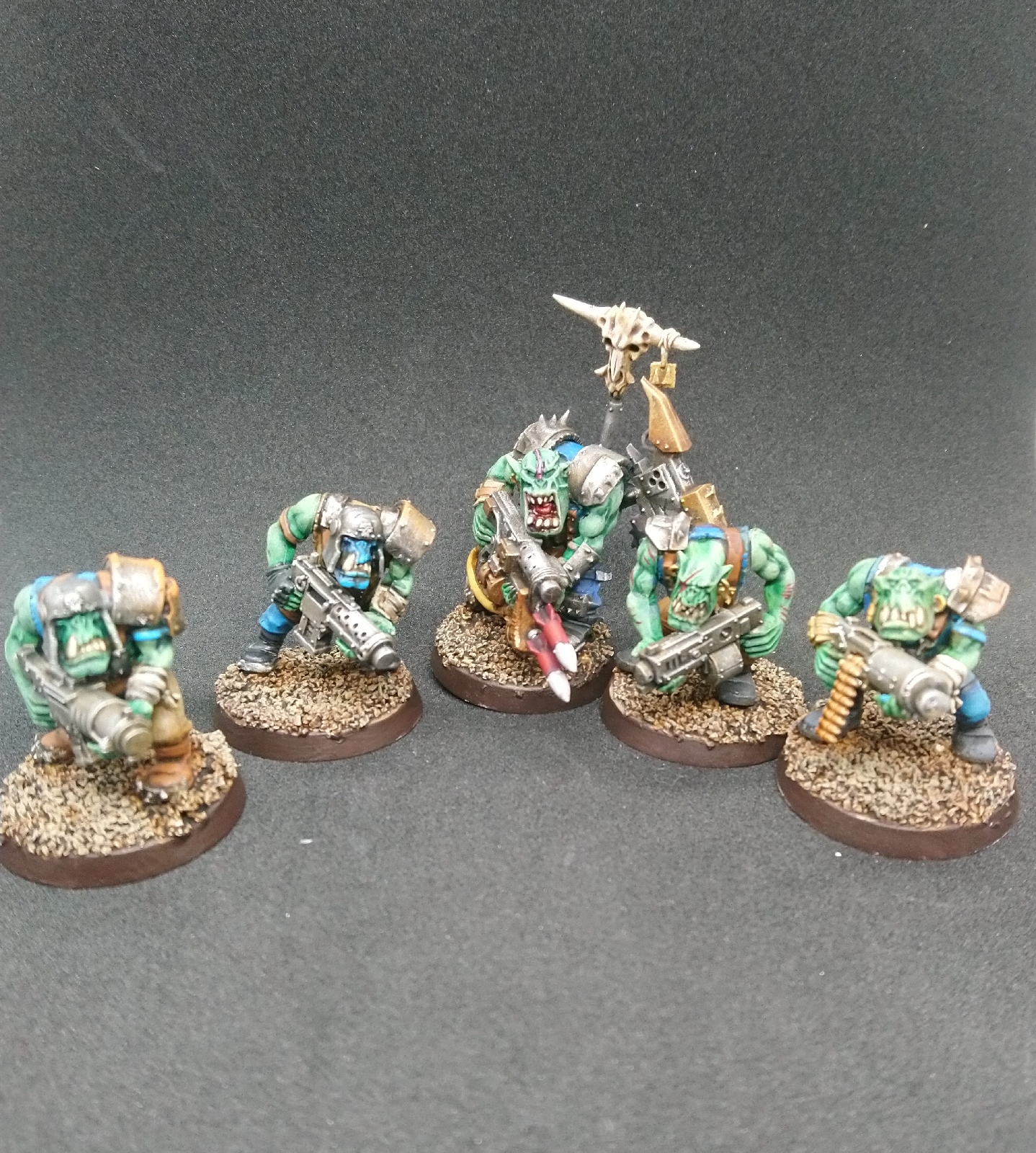 These took longer to do than I thought they would, which is a little worrying for the project as whole. I suppose these were test models though, so maybe I probably shouldn't worry too much. Obviously I'll get quicker the more of them I do! 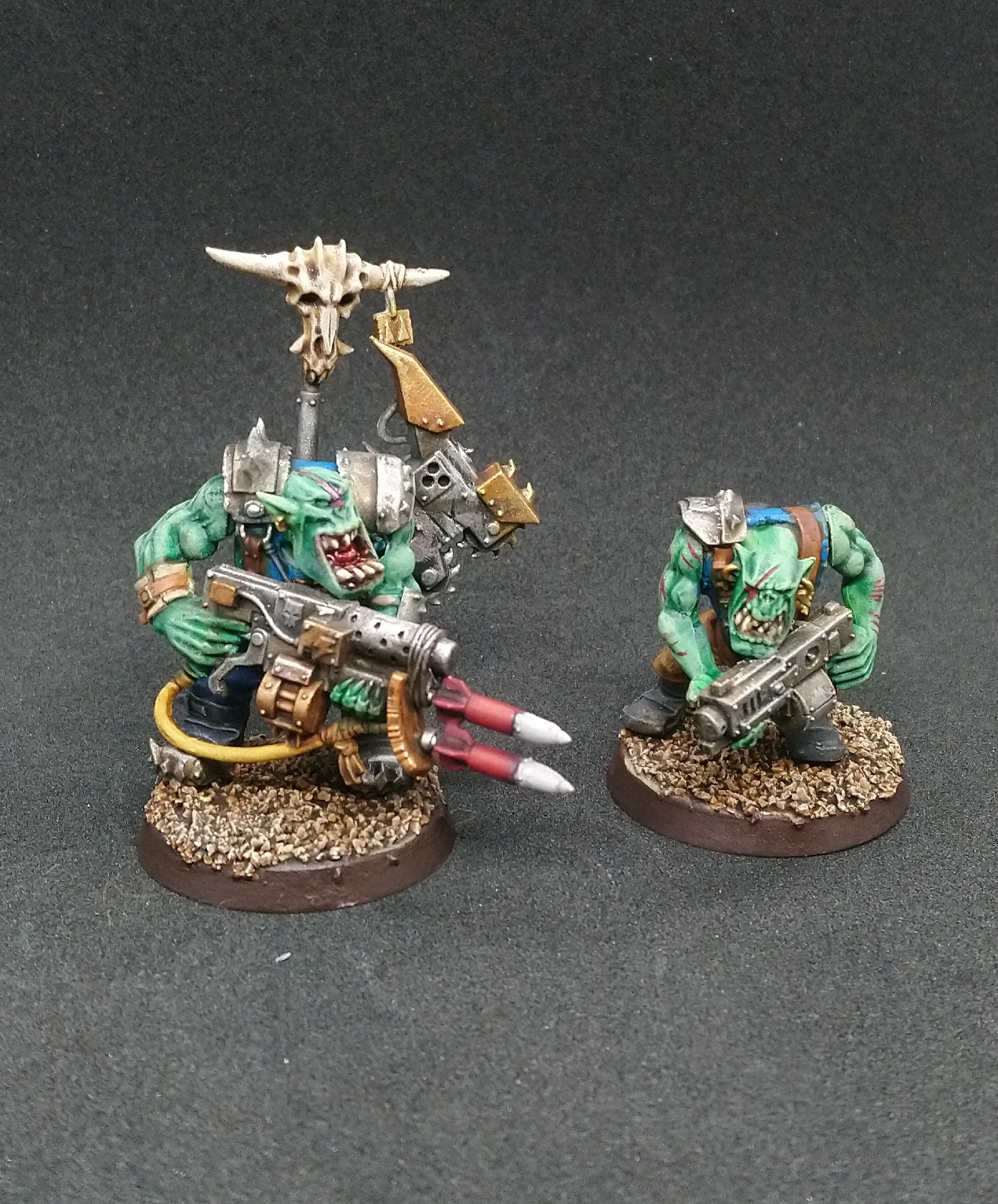 I tell you what though, if I can maintain this level of painting across the whole army, I'll be really happy. Certainly an improvement on what I could manage ten years ago!
Posted by Khorneguy at 10:16 1 comment:

I've been pretty busy recently. The build up to May Bank Holiday in a tourist town is not good for my supply of free time. Doubly so this year, what with one thing and another. Nonetheless I've been trying to get in an hour to hobby time each night in a vain attempt to cling on to my sanity. As a result, I've actually been surprisingly productive.
What have I been doing? Well, I've started a new project: 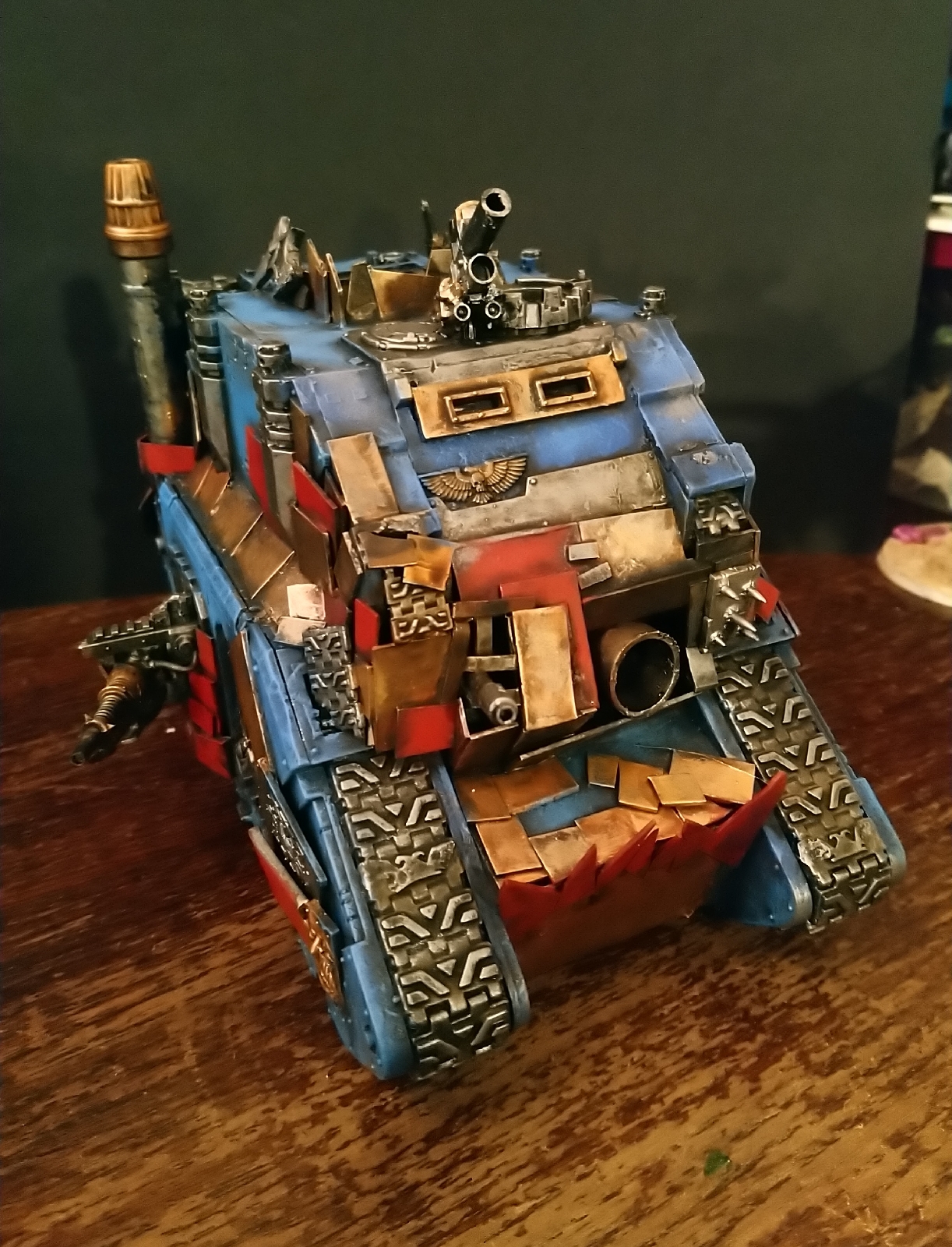 That's right, I've returned to my Orks!
I've been ridiculously excited by the previews of their new book and model range, so I figured there's no better time to get stuck into them again. Plus I'm giving up smoking atm, so they're also a bit of a reward to myself for sticking with it.
I know to more recent readers of this blog, it might seem a bit of an abrupt swerve in direction, but I've got quite a bit of history with Greenskins. Deathskulls were actually one of my first armies and the subject of my first ever post on this blog. Unfortunately though I sold off the army years ago, which means I'm starting again from scratch now.
Not that I mind too much. In hindsight, my old Orks were painted absolutely terribly. I see this as a chance to do justice to them at last!
Anyway, enough rambling. I've got that Battlewagon and these to be getting on with: 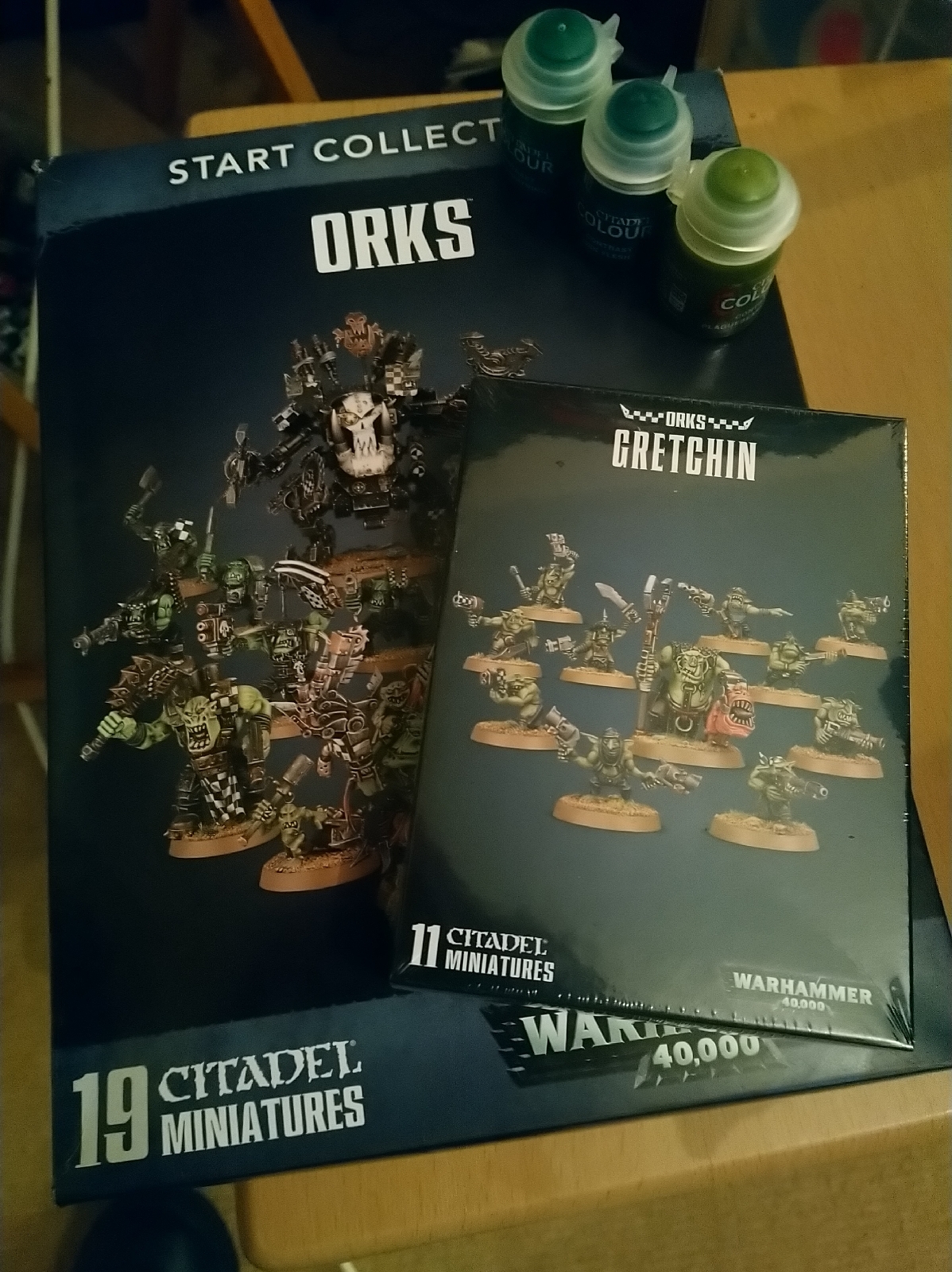 Most importantly of all, I needed to decide on a recipe for the skin. There's a ridiculous amount of different ideas out there, with each Ork player seemingly having their own. I went with something fairly simple though. 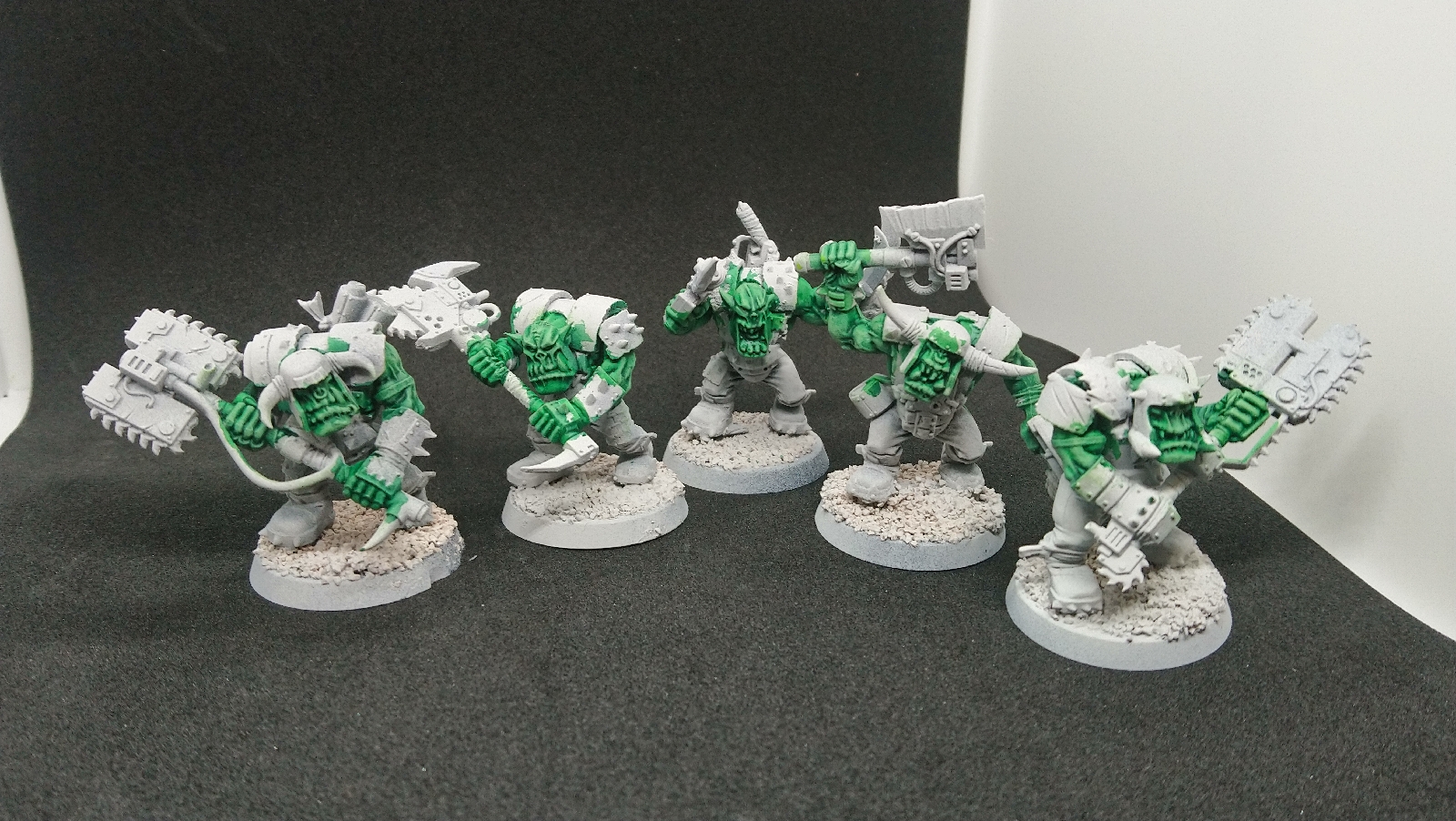 That's just Ork Flesh and Warp Lightning Contrast paints over Corax White, with a Skarsnik Green drybrush. Quick and simple, yet effective. It'll look a little darker once I've finished, but I think it should still pop nicely.
So yeah, that's what I've been up to. Hopefully I'll have some finished Orks to show you before too much longer. I've just got to keep doing what I can when I can.
Hopefully I'll be able to get some actual games in too now things are opening up again, but I'll have to see what happens. Until next time though, happy hobbying!
Posted by Khorneguy at 04:33 No comments: