It's normally about this time of year that I start posting about grand, overblown pledges for my coming year in the hobby. Not this year though. I've learnt the hard way that real life has a habit of screwing over all my plans.

Because of this, in 2016 I'm going to keep it simple and make just three pledges:

This is going to be the main one for me. 2015 has been quite a slow year for gaming, mostly due to the fact that I've spent most of this year unemployed, This coupled with having to move flat in August to an area where organising games is difficult, I really haven't done much gaming since July beyond the odd game of BFG or Betrayal at Calth.

With this in mind, my primary pledge in 2016 is to play more games. If I can aim to play 26 games across the year, I'll already be ahead on last year. I figure playing an average of one game every two weeks shouldn't be too strenuous.

A big part of achieving this will be to find myself a gaming group. In Peterborough, I attended an awesome club (Peterborough Wargames Club, check them out here). Thanks to PWC I tried a wide variety of games and they were primarily responsible for me branching out beyond GW in my gaming. Now I've moved to Norfolk though, I've found myself without a group to play with (the groups I played with when I lived here a few years ago have mostly disbanded) - a state of affairs I intend to correct!

I think my first step will be to get involved in the 30k Community in Norwich. I've visited them at Athena Games a couple of times, but haven't had a chance to actually play against them yet. It'll be good to actually be  able to face other 30k armies, as my Sons of Horus have mostly faced 40k armies in the past.

My other plan is to sort myself out with a gaming table for my flat, so I can actually play against the few gamers I know who live close enough to play games against at home. I'll be building a double-sided modular board to fit onto it, so I can play both Battlefleet Gothic and standard 40k/Fantasy/Skirmish games.

This brings me quite nicely onto my second pledge...

At the moment I have a massive backlog of models to paint - a result of being a self-confessed hobby butterfly. I'm hoping to clear a good portion of this over the next couple of months. This means actually finishing projects for a change, instead of leaving them half-finished.

Right now I have the following which needs finishing:
I think that's plenty to be getting on with for now. A big motivation for me is the idea of being able to display them in my living room now that I have my own place. My plan is to start nothing new until they're finished. My only hobby purchases will be parts I need to finish these projects. To keep me motivated even further, I make my third pledge...


3. Document it all!
Nothing keeps me more motivated than sharing what I'm doing with the hobby community. As well as blogging about my work on here, I'm also a member of Warseer, The First Expedition and Bolter & Chainsword, as well as countless hobby groups on Facebook.

Everything I build and paint will be shared online, to motivate me as well as to pick up tips and advice improve my hobby skills. I'll try and post on here at least once or twice a week, keeping track of my progress on my pledges. Hopefully all this will allow me to actually follow through on my pledges for once.


So there you go, my aims for 2016 set out and ready to go. My life is far more settled now than it's been in previous years, so I reckon I stand a good chance of actually sticking to my pledges this year. As ever, we'll have to see though.

I missed the competition deadline with this guy unfortunately. I just had too much to do in the build up to Christmas to sit down and get him finished properly. Nonetheless, allow me to present my current WIP: Alto Damokai, Praetor-Librarian of the Thousand Sons 55th Company. 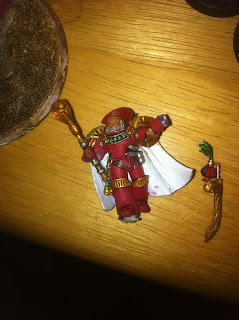 There's still a way to go on him, but I'm really liking how he's turning out. The huge amount of hours I've spent on him is really showing through. I've made a sculpted base for him too, but I unfortunately didn't have time to snap pics of it before work this morning.

What do you think so far?
Posted by Khorneguy at 10:05 No comments:

It's a slow day at work today, so I figured I'd use the time to post and schedule blog updates.

Mostly I've been focusing on painting the Dreadnought I showed in the last post, but I've also started work on Damokai himself and continued to work through my mountain of basic troops. Progress is being made, albeit slowly.

Here's how the Dreadnought stands atm: 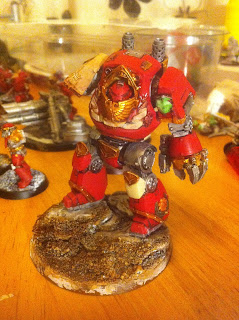 Still a long way to go on him, but I'm getting there. I'll finish him up right after I paint up my Preator for a competition next week. Between the comp, work and christmas coming up, I'm ridiculously busy atm, so I'm not even sure if I'll get him done before the deadline on monday. We'll have to see.
Posted by Khorneguy at 23:23 No comments:

No completed models for you today, but I have been working on a Contemptor Dreadnought which I bought off eBay couldn't resist stripping down and painting as soon as it arrived in the post.

After two nights work, this is how it looks: 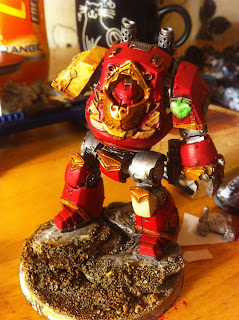 There's still a long way to go on him, especially on the top half, but I'm quite proud of how the legs have turned out. Not shown are the various papers and scrolls which I'll be attaching when I'm done to give more of a Thousand Sons vibe to him.

The provisional name given to him is Ancient Alkush, 'The namer of names'. Thought up by my girlfriend who got fed up of me asking her for Egyptian-sounding name suggestions!

I've started logs for this project on a couple of forums, so I should have plenty more to show off soon.

Posted by Khorneguy at 15:39 No comments: 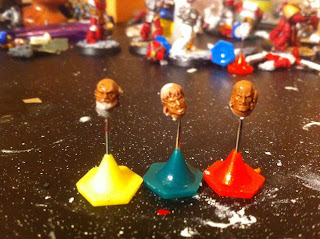 My bag of heads arrived at long last from Bits and Kits this morning, so I've taken a break from painting red armoru so I can work on them.

The one on the left is going to my Preator, whilst the other two are destined for my Tactical and Veteran squads. I've got another half dozen which I haven't started on yet, mostly due tonot having enough pins to mount them on.

Not a bad start, even if I say so myself. I love it when I reach the stage of new projects where I have all the materials and things start to come together like this.

Hopefully it won't be too long before I actually have some completed Thousand Sons to show you.
Posted by Khorneguy at 12:00 No comments:

It's been a while since my last post. This is mostly due to being unemployed and just having moved into a new place, so i've been too busy to get round to blogging. I've been slowly plugging away at some of my projects though. I even got some models finished for once! I'll be trying to post up my progress on stuff over the  next couple of weeks.

The main thing I'm working on atm are my Thousand Sons. I've finally found a red paint scheme which works for them and I actually like. This coupled with the release of Betrayal at Calth means I can get most of what I need in one go. I've got my copy of B@C ready to go, thanks to my lovely girlfriend who got it for me as an early Christmas present, but it's taking all my self restraint not rush through and assemble it all at once.

This is the test scheme i have so far for my XVth Legion: 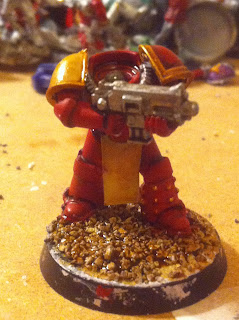 I've got a plan to convert up some helmets for them from Chaos Warrior helmets, so he's remaining headless for now (Assuming I don't go the whole hog and buy FW heads for the whole army) and I'm going to see if I can prise the left shoulder pad off so I can replace it with the Mk IV Forge World ones previewed in their newsletter today, but other than that, I'm happy with how he's shaping up.

With the test model complete, I've started a little production line to paint up my first squad: 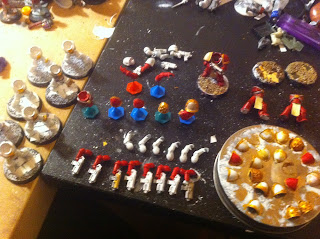 'Slow and steady' is my watch phrase for the whole project. Considering I've been planning this force for nearly five years now, I don't want to get too carried away and potentially ruin my expectations for the end result by rushing through it.

I'll post more soon.
Posted by Khorneguy at 13:39 No comments: