Some answers at last!

GW has posted upsome new FAQ's for both the 'Nids and Blood Angels. They clear up some major rules debates which have been raging for months now.

First up, the Doom of Malantia's Soul Leech ability does NOT work on units in transport vehicles.

Mawlocs can deliberately come up underneath units, instead of relying on luck to scatter them onto their target

Descent of Angels CANNOT be used on transport vehicles, so no more DoA-ing Land Raiders

Vehicles gain cover saves from Shield of Sanguinius - wow, they must really want us to mech up with BA. I'm tempted to do it myself after hearing this, although i've been against the mechanisation of my armies my whole gaming career (about 7 years)

There's a load more, but not as major as these. Check them out on the GW website if you want to know more.

On the whole, common sense has won out, but there's still some odd ones in there, like the fact that Shadow in the Warp doesn't effect units in transport vehicles, but i can forgive them that one, as the other 'Nid powers don't affect units in vehicles, so top marks for consistency.

It seems like GW's finally starting to address the real issues in its FAQs, which can only a be a good thing.

Only time will tell if they'll keep this up
Posted by Khorneguy at 14:06 No comments:

College has now finally finished, but that means i now have to find a job and start paying my way in life :(

On the other hand, i now have a ton of free time compared to before, so i've been painting. I've decided to work through the huge pile of random models that litter my desk, shelves, cupboard, army cases, etc. But me being me, i'm not working in a logical order, literally painting whatever the hell i feel like at the time. It's had mixed results. I'll leave it up to you to decide if it's good or not.


First up, i'm stripping down a load of (very) old models that have too many layers of paint on to even identify properly, let alone use. I'm using fairy power spray and it's working quite well on metal. Plastic's a slightly different story, as you'll see in a minute 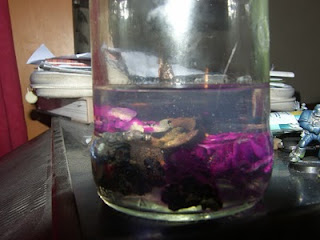 Heres the first batch, freshly stripped. I know the top one (plastic scout in case you're wondering) isn't fully stripped, but as i said before, the power spray didn't work so well on plastic as metal. I think I might need repeated soakings to get it all off. 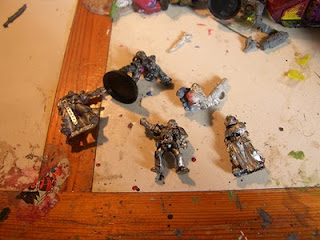 I've also been starting to work on the batch of scout bikes i got for my birthday back in February. I'm planning to eventually make a Salamanders Biker army. The low model count means i can take my time and paint them up really well (for me at least) 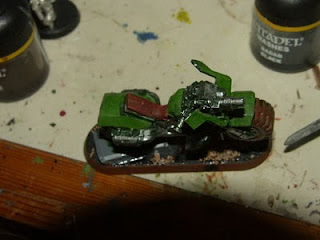 A batch of zombie Plaguebearers for my Deamons force 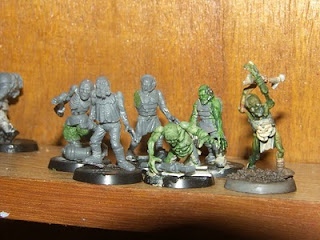 Possessed Dreadnought. Probably going to be used as a Lord of Change or Bloodthirster. Note that it's a Blood Angels Dread, the only chapter to get Librarian Dreadnoughts (the only thing easy to possess than a psyker is a nearly dead psyker!) 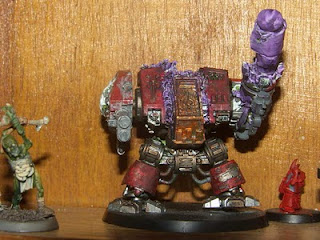 I'd nearly painted this guy when i decided he needed more flames and 'possession-y' stuff, so the final thing will look a lot more elaborate than this, complete with flaming wings coming out his back! I think it'll look awesome and it'll be good for WYSYWIG too.


The first of many Orcs 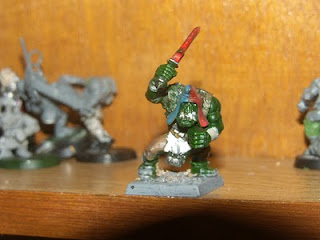 I also found a buch of random marine models whilst sorting through stuff, so i decided to paint some up, more as test models or experiments than with any consistent colour scheme in mind 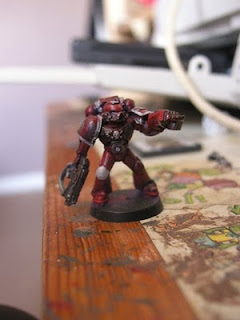 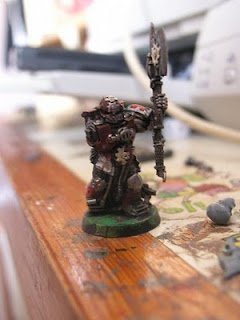 I know it's random stuff, but what do people think of it all. Any requests on which stuff to paint up first? I've still got Blood Pact stuff in the works to show off too.
Posted by Khorneguy at 21:42 No comments: