Ok so the new Necron models are full of disappointment. With the exception of possibly the Tomb Blades, they look more like they belong in a Dark Eldar army rather than amongst the simplicty of a Necron force. Many Necron players around my local GW agree with me too. 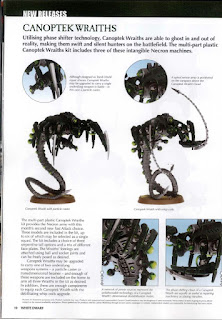 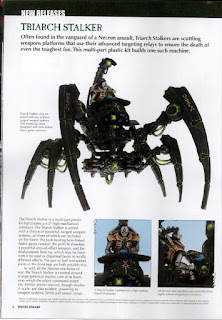 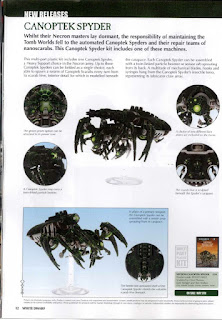 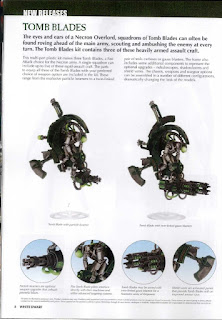 However the new models look like great candidates for Dark Mechanicum conversions. As soon as I've got the money, I'm adding a contingent of twisted warmachines to my Blood Pact and Chaos Space Marines based off these beauties.
Posted by Khorneguy at 01:53 2 comments:

It's getting depressing just how many back projects I have to clear.

Well it seemed like a simple enough goal to set myself: Build and paint all your half-finished projects, before you buy new models. That way I'll have a load of finished armies and will save me some money while I'm working on what I've already got.

Seems fine to me, I thought and promptly started cataloguing every single model I had left unfinished, so I could tick them off as they were completed and I could see what I have left to do.

Two days and over 300 models later, I was barely half way through my collection, but I persevered. Eventually I had a comprehensive list of what I needed to do and set to work, painting an entire Mordheim warband in an afternoon and feeling very proud of myself. i ticked them off and took a well earned break. Everything seemed to be going well.

The my flatmate asked me to find something in the cupboard for him. Rooting around for it, I found a box containing my half-finished Space Wolves army gathering dust. I swore rather loudly at this point.

So anyway, I decided to pick up a pot of the new GW dry paints and paint them up staright away, taking me a step closer to that magical point can start buying GW models again and making sure I didn't need to enter them onto my list, taking me further away from my goal than I had been before I painted the Mordheim warband 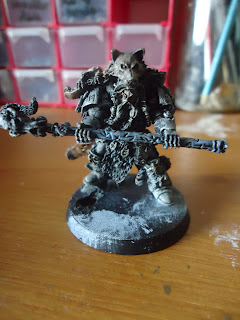 I used a heavy drybrush of Etherium Blue over a Chaos Black undercoat as a base, then applied a light wash of Badab Black to create the stormy-grey colour I was after.

After that I applied various washes to various parts of the the model to bring him to how he is now.

Mainly I just need to paint details like his beard, tailsmans and staff, then base him, then he's done. The rest of my Wolves will be painted in pretty much the same way, which hopefully will speed up the whole process, seeing as the Etherium Blue condenses what used to be about five different layers of painting into one drybrush.

All in all I'm proud of the way he's turned out, despite the rushed paint job. Once I've got pictures of them, I'll put up my Grey Hunters i painted in the same way, as I think it's a great and speedy way to churn out a Space Wolves army
Posted by Khorneguy at 18:52 No comments:

On the advice of a friend, I checked out a new gaming club tonight (Aftermath in Norwich), seeing as my gaming life has suffered in the last few months since moving into my new flat.

Seems a decent enough place, with plenty of 40k and Fantasy players, but there were also a lot of other games going on, from Battle for Westeros to Warmachine and various trading card games . One game that particularly drew my attention though was Malifaux.

I got to sit in on a game and it seems a pretty nifty and streamlined rule set. There's also the fact that I've been eyeing up the models in my local gaming shop for months now - you've got to love steampunk.

Anyway, to cut a long story short: one of the players has offered to take me through a couple of test games, so I can get the hang of the rules before joining the regulars down at the club

It gives me a good excuse to pick up a set of those gorgeous models that Wyrd Miniatures is doing, as well as learn a new system that could keep me gaming for the next few months (money's going to be tight), seeing as you get everything you need for a crew in one box and the rulebook's cheap enough to pick up.

So yeah, going down to my LGS tomorrow, see which crew i most like. At the moment, I'm leaning towards these these lovely ladies: 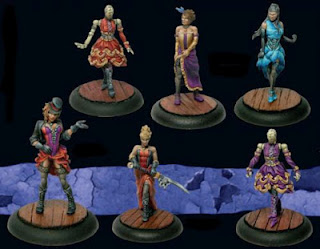 They'll be a nice painting challenge for me and hopefully they'll do well in-game too. I'll let you know how I get on
Posted by Khorneguy at 22:44 1 comment: