Ok, so the Zombie plan didn't quite pay off. As I've said before, I'm moving flat in the next couple of days, so the need to pack kind of overtook me.

However, I did manage to get a little progress done on the Bloodthirster. Not much, admittedly, but at least it's something 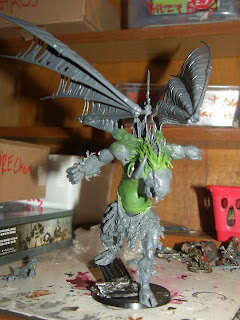 Hopefully by the weekend I'll have my new hobby area ready, complete with proper lighting set up, so there'll be both progress on all my projects and proper picture to show you.
Posted by Khorneguy at 23:58 1 comment:

With the new Vampire Counts book now up for pre-order, I felt it was time to tackle the Zombie part of my check list.

Over the next couple days I'll be painting up this lot: 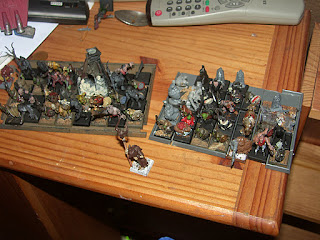 I've wanted an all-zombie horde for years and with the new book, what better chance will I have?

I also want to pick up some of the gorgeous new models that are on the way, namely the Mortis Engine/Coven Throne and Vargheists, but I'm staying strong and not buying any more models until my checklist is done.

So this afternoon I will tackle all those Zombies, as well as the Necromancer, as I've been hearing rumours of a Lord-level Necromancer option making a comeback. Hopefully I won't have to buy Kemmler to access that option, but only time and having the book in my hands will tell.
Posted by Khorneguy at 12:25 No comments:

Ok, I got a little sidetracked from my list, but I've been packing to move flat so I've been finding all sorts of old projects that have piqued my interest again, which I feel gives me a good excuse.

Whilst clearing out one of my many cupboards where i keep all my past projects, I found some old Daemon models that I meant to put up here earlier this year. Well, one thing led to another and I couldn't resist painting up a few that I didn't quite finish

For those of you that don't kmow, the whole idea behind my Deamons army is an Imperial world undergoing mass invasion/ possession, with Zombies and possessed Guardsmen forming the majoirty of the force.

First up I've been doing a bit more work on this guy: 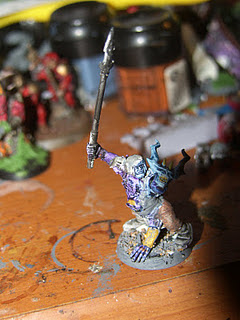 I'll be the first to admit it's one of the stranger ones, intended to become an standard bearer when he's done and I can find a good icon to stick on the pole.


I've also started work on my second Deamon Prince, based off a Chaos Knight's horse and whatever I could find in my bitz box 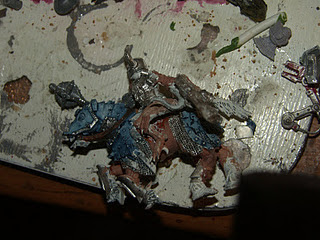 Also, I unearthed the Dark Angels Veterans kit i bought ages ago and misplaced, so I could work on some more Pre-Heresy Thousand Sons... 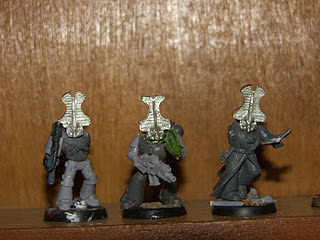 I've almost got enough for a full squad now, so I really need to decide which codex I'm going to be using, as well as step up my level of production on them - the army's intended to be my entry for Armies on Parade this year. Only nine months left!

Let me know what you think and I'll post more up soon. Throgg's fully modelled and based now so I'll try and get him photographed for you before he gets packed
Posted by Khorneguy at 23:50 No comments: