.. And thats the extent of the festive content on here. Bah humbug!
Seriously though, after talking about getting to grips with my backlog in my last post, I decided to do a mini audit of all the half completed projects I have strewn about: 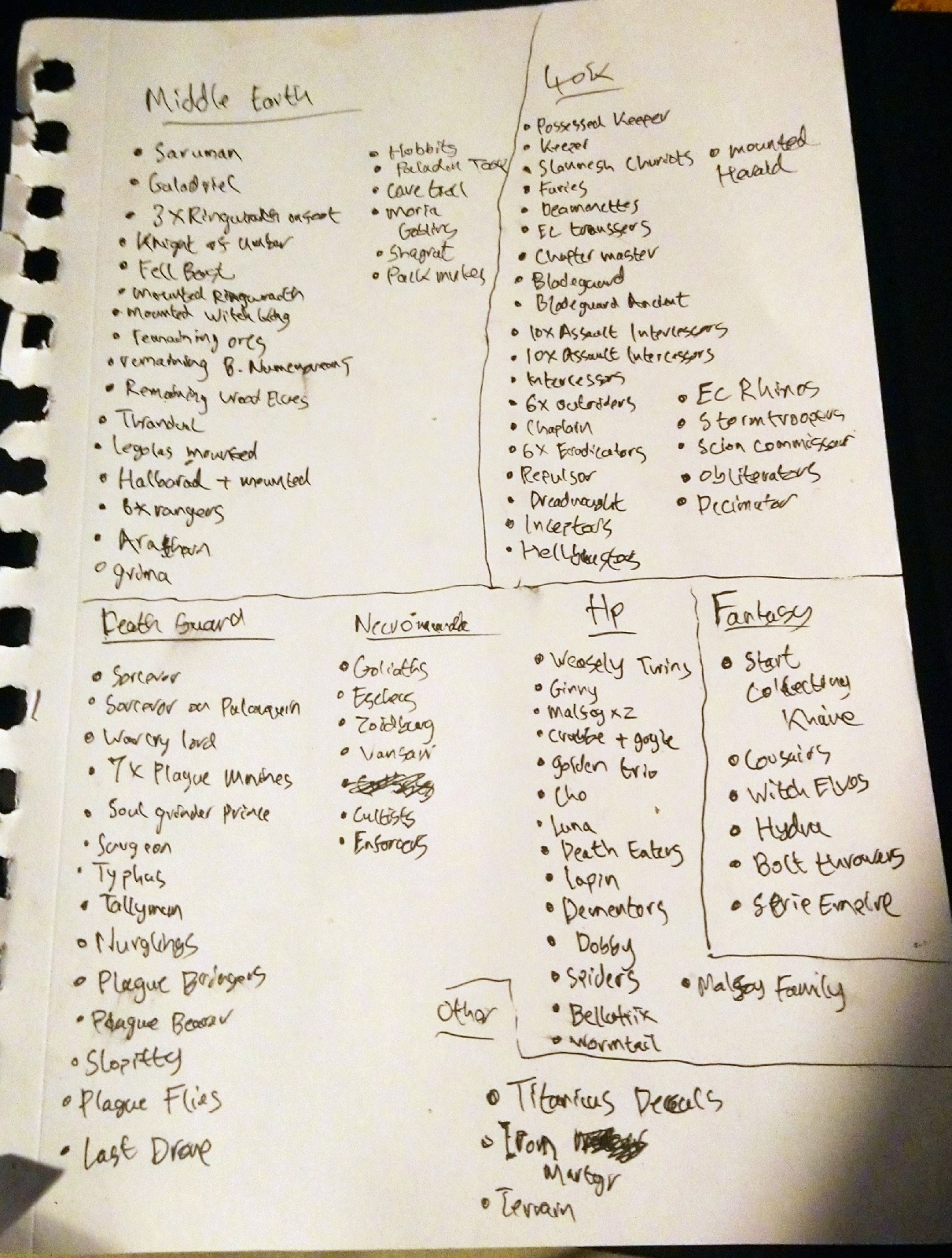 That was my first mistake. As you can see it's huge!
To be fair, everything listed as Death Guard is for a friend who really doesn't care how long I take to paint his stuff, but it's still a pretty hefty list.
It very much confirms how much of a hobby butterfly I am. It also shows how terrible I've been at finishing projects I start until recently. None of those are fresh in their box, they're all things i've started and then gotten distracted from!
Now the purpose of making this list isn't just to depress myself with my lack of productivity, although that is an unfortunate side effect. It forms a handy reference guide when I'm looking for something to paint. In theory, it means that no project becomes wholly forgotten. I can find something that needs doing and catches my interest at a particular moment, then go dig it out and work on it.
It's a simple enough theory at least. I've even made a start on it, with Saruman and some Ringwraiths on foot making it onto my painting handles this week: 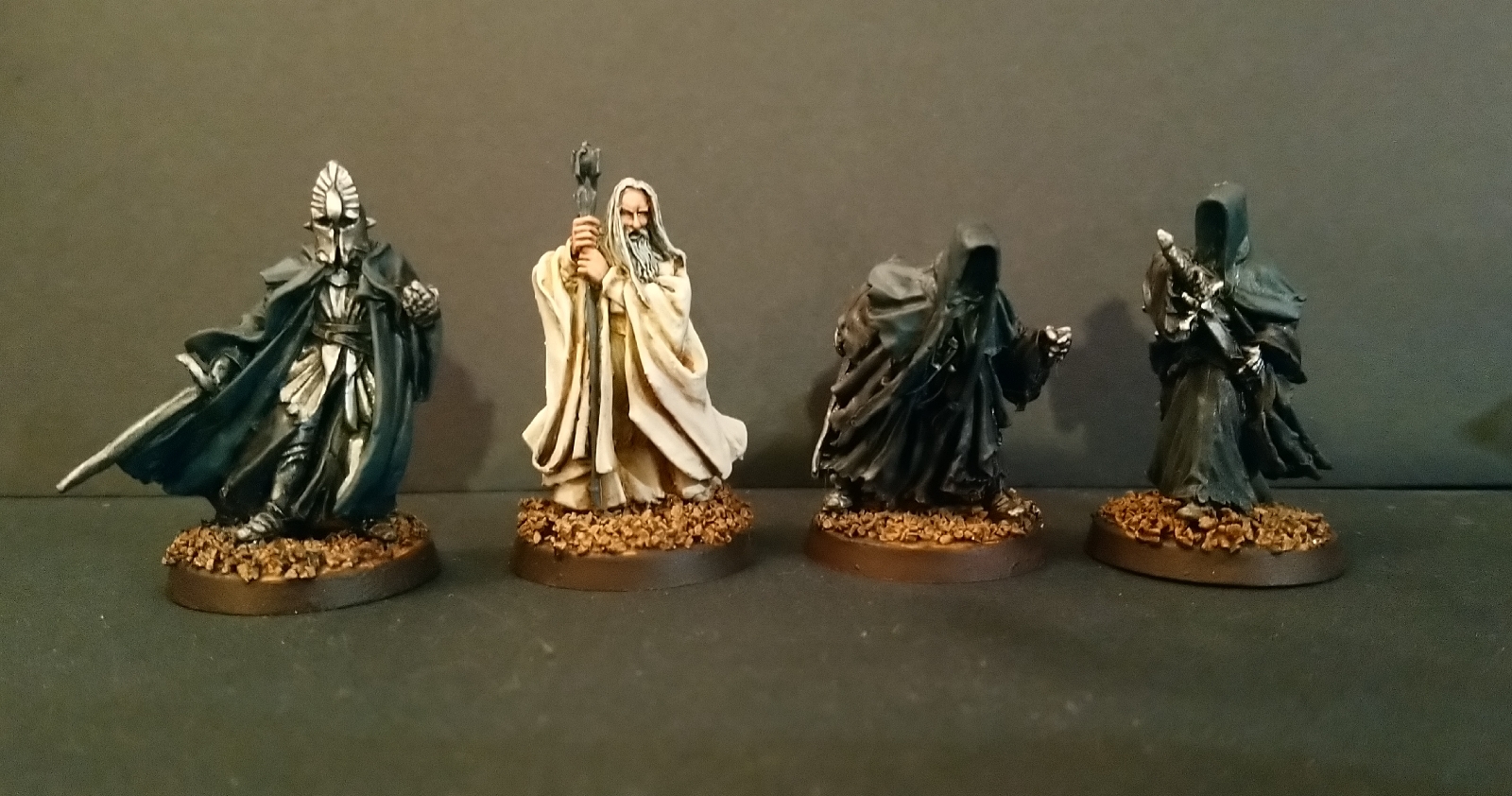 I'd just like to take this opportunity to say that photographing mostly black models is a pain in the arse with my current setup!
They didn't turn out too badly for a few evenings worth of work though. I didn't try anything too fancy with the Wraiths, as beyond scenario play, they're mostly going be used as dismounts. I did them mostly with Contrast apart from final highlighting and the metallics.
I did put a bit more effort in on the layering on Saruman's robes though. It didn't turn out as smoothly as I'd hoped, but looks decent enough. I picked him up on a whim a while back, partly because I absolutely love that particular sculpt, but he's also going to eventually be part of my Fantasy Fellowship/White Council. That's a while off yet with my current plans, but Its nice to have him done.
I'm not sure what I'll do next, but general productivity seems to have settled on me now, so that's always a good thing. Hopefully my manic work schedule between now and New Year doesn't chase that away!
Talking of which, this will probably be my last post before Christmas, so I'll take this opportunity now to say stay safe and have a Merry Christmas to you all. It's been a crazy year, but hopefully things will be looking up as we go into 2021.
Merry Christmas!
Posted by Khorneguy at 07:12 No comments:

Getting to grips with my backlog

I've slowed down my pace of work a little this week. I've just been chipping away at my backlog. This time I finished up my mounted Knight of Umbar for Corsairs and some Morgul Knights for my Mordor force: 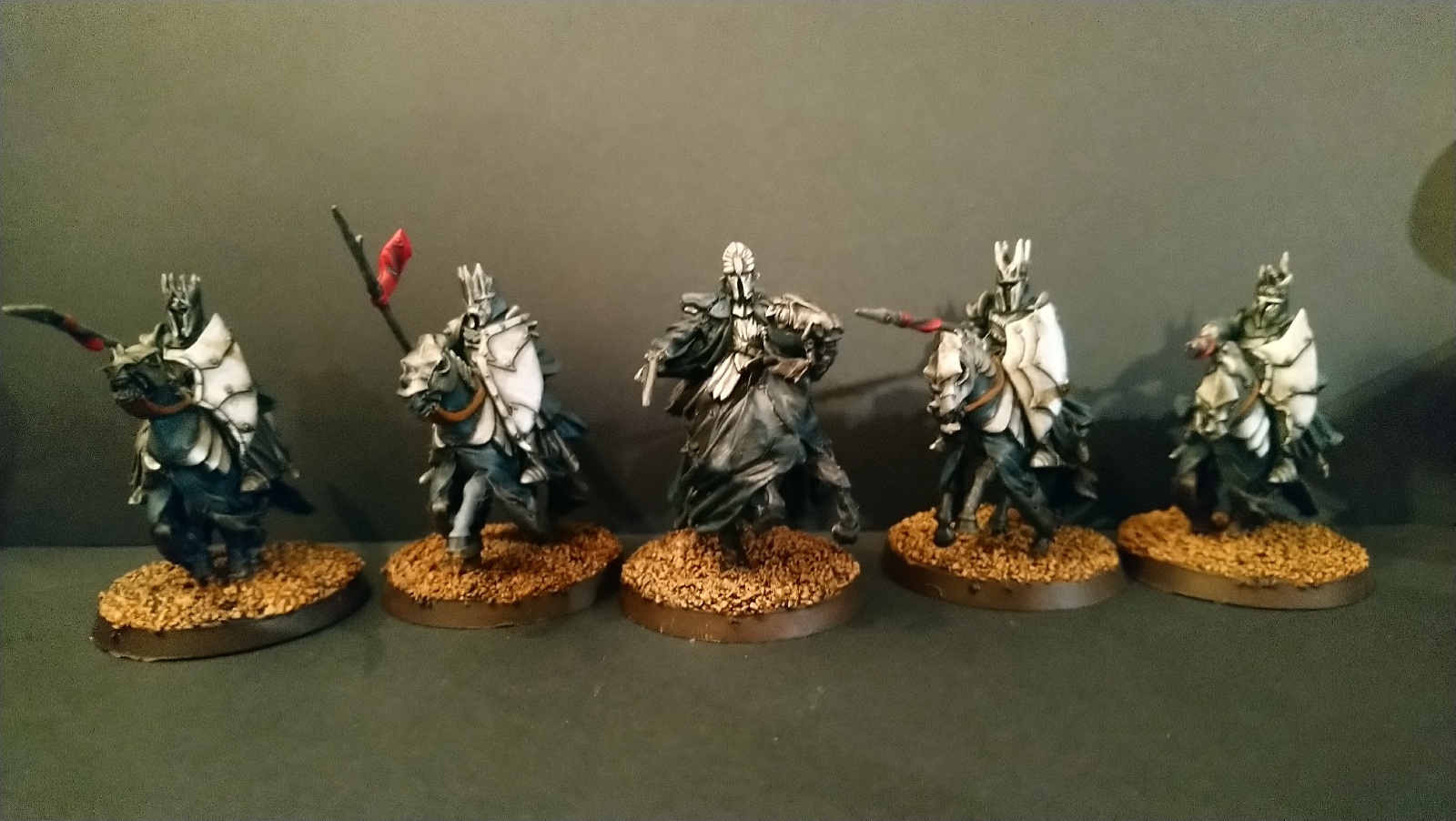 They didn't turn out as well as I'd hoped, but they're decent enough. Quite frankly I was sick of looking at them on my painting desk, so it's nice to be able to move onto something else.
I'm coming to the conclusion that my Pile of Shame is getting a little ridiculous again. Being stuck inside most of the year has given me far too much free time to scroll through ebay and pick up various bits and pieces which I probably didn't need. A quick glance at my running total of painting points shows just how much all that has added up, despite how much I've been painting recently!
I need to get back into positive figures on my painting points. I haven't been nearly as disciplined with it as I really should have been. With that in mind, I've decided that I'm going to force myself to be strict and not buy any new models until I hit that magic number of zero!
If I manage that, I'll treat myself to a set of Balin's Tomb terrain and some lovely Hobbit characters from Forge World. A nice little incentive I reckon.
Luckily I've got loads of metal Middle Earth characters knocking around which I can knock out reasonably quickly, plus my Indomitus sets which should take massive chunk off that total too. Wish me luck!
Posted by Khorneguy at 11:17 No comments: