I've been a busy guy over this last week. Prep for Pokemon VGC International is taking up the vast majority of my free time. I did manage to get another set of five Noise Marines finished though. 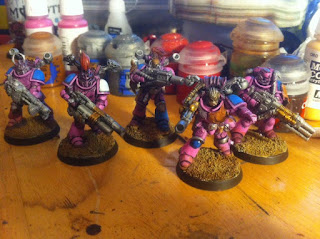 (Still no new daylight bulb, so apologies for the naff picture
quality. This will be fixed when I get paid later this week.)

I started these guys way back when Dark Imperium was first released, so it's nice to finally get them done. As you can no doubt tell, they're converted from the Primaris Marines you get in the box. Fluff-wise they're 'converts' who have been captured and tortured by the Emperor's Children and made to see the glory of Chaos.

So that's another five painting points for me. It's all coming together nicely. Next up is probably this beast, which I started on a whim yesterday. 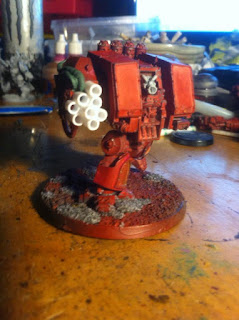 I think I have a problem: I can't stop building Sonic Dreadnoughts! This will be the third one I've built since July.

I still need to finish building him obviously, but he'll probably be next on the painting table. I need to decide whether to give him a Power Fist, Scourge or go with a Missile Launcher. I could magnestise it, but the next part of the conversion I'm planning will make that a pain to do. This means I'm actually going to have to make a decision, which could be problematic.

Posted by Khorneguy at 01:20 No comments:

Remember my last post, where I said I wanted to get my Sonic Dread finished? Well it seems that after a few months asleep, my hobby mojo is up and raring to go!

Not only did I finish up the Dreadnought, but I also finished a Noise Marine squad and a load of Cultists to go with them! Given how few and far between my productive streaks tend to be, I'm certainly not complaining.

Here's a group shot. You'll have to forgive the terrible quality. My daylight bulb blew at precisely the worst possible moment: 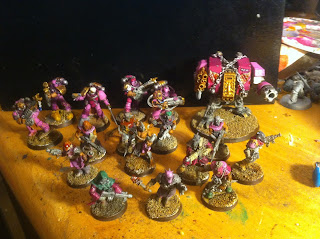 I'll try and get some better pics later on. For now I just wanted to show off how busy I've been. There's another 22 Cultists and 10 Raptors sitting on my painting desk too, so I can't see this run of finished models letting up any time soon.

Wow, has it really been nearly four months since I last posted?

Life's been pretty crazy for me over the last few months. Between personal issues and working in retail in a tourist town in summer, I haven't really had the time to keep this blog updated. I would say it won't happen again, but I think we both know it will.

Anyway, just because I've been away from the keyboard doesn't mean I haven't been making hobby progress. In fact I've been making loads of it. Since 8th Edition release I've painted gotten a crazy amount of Emperor's Children painted or nearly painted and my Deathwatch are coming along nicely too.

The problem is that due to not having the time to keep the blog updated,  I've completely lost track of my painting points and 365 Challenge. I'm not even sure what I already claimed points for. Obviously this is a problem. Luckily I've got a simple, yet elegant solution.

Well not quite. I'm just going to hit a big ol' reset button.

It makes sense to me. My painting points were only meant to give me a rough idea of how much progress I'm making, to keep me going in the right direction hobby-wise. I'm not going to stress myself out trying to work out what I've done recently. I'll just start it again from scratch and try to actually keep things balanced this time around

I do want to go back over a lot of the stuff I've been painting recently, as I've been mostly just churning them out to basic tabletop standard so I could get some games in. Now I have a playable 2000 point force for 8th Edition 40k, I can go back give them the full 'love and care' treatment, ready to go in this: 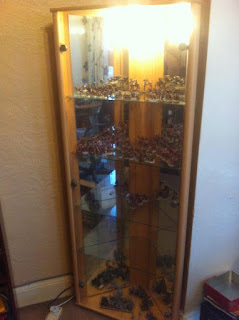 I found this display cabinet going cheap in a local charity shop the other week and I have to say it's rather fantastic. It should be a great motivator for me to actually get stuff finished so I can show them off.

So without further ado, let me show you what I've been working on: 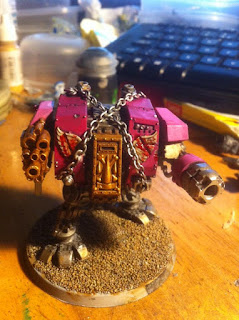 Any Emperor's Children army wouldn't really be complete without a Sonic Dreadnought or two. The problem was that Forge World don't produce models for them any more. Luckily a solution quickly soon presented itself. A mate of mine was having a clear out and had an old Blood Angels Dreadnought he thought I might be able to make use of. Result!

A bit of converting and application of some modelling chain later and I had my Sonic Dread. I had great fun converting up a suitable Blastmaster with some plasticard tubing: 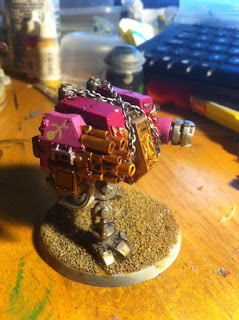 I've still got a few details to finish up with the painting, but I'm happy with the way this is turning out. I even managed to do a little bit of freehand!.

I particularly like the way I've left a few of the BA-specific details showing, as it conjures up some very evocative images in my mind. I figure that the ever-creative warriors of the 3rd Legion would take great delight in torturing one of their captured cousins, so background-wise, it's still the orginal occupant in there. His screams of torment are now turned against the Imperium he once fought to defend,

I think Slaanesh has clearly corrupted my mind!

Anyway, I'll post more once he's done. Shouldn't take long, as I'm on a bit of a hobby kick this week.

Posted by Khorneguy at 03:24 No comments: