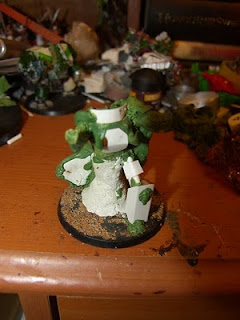 Carrying on with the showing of progress, here is my WIP of my scratchbuilt Magnus the Red.

I know it doesn't look much right now, but eventually he's going to be used to represent Magnus at the height of his Pre-Heresy/ Pre-Rubic power. Made entirely from scratch,using Milliput, Greenstuff and Plasticarc, at the moment his chest comes to a little higher than a Dreadnought's carapace.

His size I've had a few lively debates over. Every source on Msgnus has him standing at a different height, but seeing as I'm basing him off Graham McNiells description of him, it doesn't really matter what height i make him, seeing as he describes Magnus as being able to morph his size as he saw fit, sometimes appearing a little bigger than a marine, other times a towering monstrosity.
Either way he's taller than other Primarchs and making him about the size of a Dreadnought (5-6 metres tall) seems to work for him, both in terms of looks and possible playability. No idea what to use him as yet but I'm thinking either make my own stats/ datasheet, use either a Tzeentch Deamon Prince or Lord of Change/ Fateweaver or look into Forgeworlds Lord of Change special character. Either way, this guy's taking to the field in one way or another, at the head of these guys... 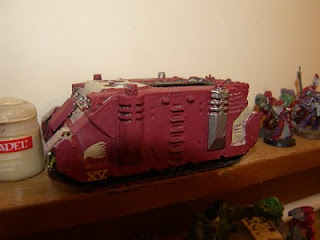 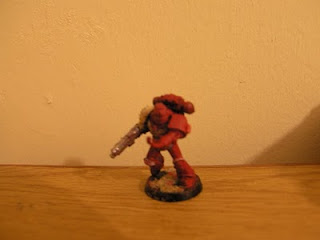 ...I know the pics are a little blurry but here's the first of the Pre-Heresy Thousand Sons to accompany him, along with a Rhino as well. This first squad is going to be Ahrimans personal squad, hence the start of the Corvidae symbol on the side of their transport.

The rest of the squad will go up when I can get pictures.
Posted by Khorneguy at 09:33 No comments: 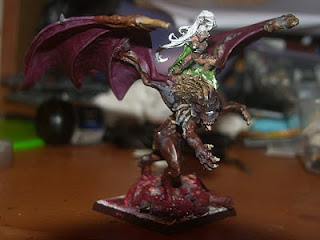 As promised this is the start of my showing of progress. This is Hellebron on her Manticore. She’s more or less done apart from obviously adding arms (already done by the time I post), sculpting a cloak to visually link her to the Beastmaster who originally came with the Manticore model and finishing up the paint job. As you can tell she’s based off the Lelith Hesperax model from the new Dark Eldar range and held on by sculpting an extension to the mane around her legs - a long difficult task green stuff, milliput and repostioning the wing, now I see why so many people complain about the metal DE Manticore to be honest

Next from my DE are probably going to be my Wych-based Beast Catchers
Posted by Khorneguy at 11:21 No comments: