Every ship needs a cat...

Just a quick one today. I wanted to show you the finished unit filler I've made: 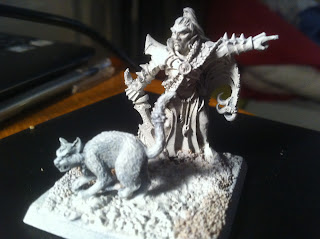 It's the cat from the old Neferata model in the Vampire Counts range. It's had an interesting history in my collection, serving first as a Chooser of the Slain in my old Space Wolves army, then as a Focus Familiar for my Sorceress back when I first started DE. It's been sitting neglected in my bitz box for some time now, so when I was looking at ways to make my unit fillers more interesting, it seemed the perfect fit. A ship's crew needs a cat.

The fact that my regular opponent in the campaign so far is a particularly tough Skaven player just makes it's inclusion all the sweeter. Hopefully it'll help me hunt down some rats!

No painting progress to show you today. instead I've been having a play around making magnetic movement trays.

I've been wanting to make these for a while, mostly to make transporting my armies to and from my local gaming clubs a little bit easier. I rather like the idea of having some custom cut foam to fit each unit, transporting them on their trays,  then being able to simply plonk the entire unit down on the board without having to unpack each individual model and ranking them up.

The obvious starting point was the Corsairs I'm working on at the moment. The process is quite simple really. Using the 2mm N35 disc magnets I ordered in bulk from China (£5 for 300 - bargain!), I just glued one beneath the base of each model in a regiment. 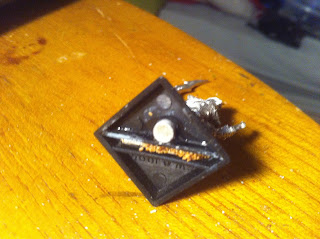 For the actual trays themselves, I bought a load of magnetic whiteboards from my local Poundworld, cut away the plastic borders, removed the cardboard backing and I had all the magnetic sheets I needed. I just had to cut them to fit a movement tray and glue them in place. Five minutes with superglue and basing sand and I had something like this: 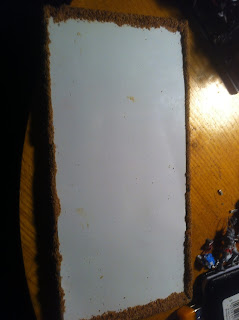 It's very rough looking atm, but the next stage will be spraying and vanishing it. However, I  couldn't resist having a play with one of the smaller trays and the corsairs I've magnetised so far: 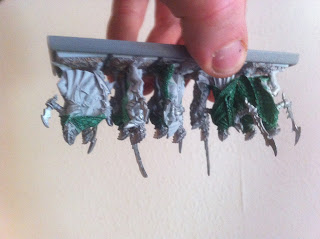 That should do nicely! I've yet to be able to pull the same trick with the metal models on the 50-man tray, but it doesn't matter too much. I'm not trying to play Warhammer on the ceiling, I just want to stop the models from moving around, which is what I've achieved. Plastic models on the other hand, I could probably throw around the room and they won't come off!

Anyway, this experiment has worked like a dream. I'm really happy with it and looking forward to doing the same for the rest of the units in this project.

Posted by Khorneguy at 07:17 No comments:

Progress continues apace with my Corsairs. So much so that I'm in danger of actually winning some painting points back on my total! 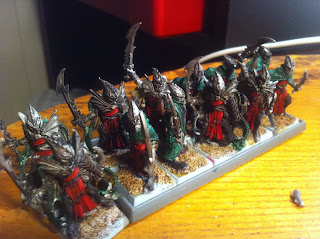 I know this isn't really the best of photos, but it's the best I could manage. Working nights and a lack of natural light during my normal waking hours at this time of year means I've had to make do with the daylight bulb I use when I'm painting. I'll try and get soem better pics on my next day off.

Anyway, back to the models. They really are a joy to paint and really don't take too long per model to get to a good standard. I'd say batch-painting these twelve took me about four hours, which really isn't bad. I just need to do some highlights, pick out some details, paint their faces and add some snow flock to their bases and they're ready.

I'm so happy with them that I've already started preparing the next batch. Normally with large units, I can only bring myself to paint about ten or so before I'm bored and need to paint something else to break up the monotony. With these guys though, I'm just plowing straight on.

Here's the next 13, still being based up and converted. 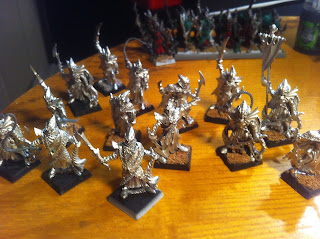 Plus the beginnings of the unit fillers: 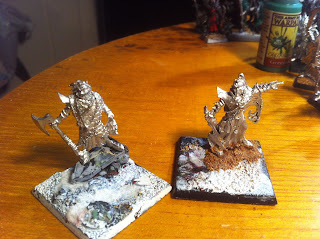 I've adding weapons and whips from the Witch Elves kit I've got knocking about, partly to take away from the limited number of sculpts available, but I also figure that if they're part of a Beastmaster force, they need to look the part. A few whips sprinkled in helped nicely with that one.

The unit fillers came about because I really love the champion models which came with the auction, but I got multiples of them. I didn't want the unit champion to look the same as any other models in the unit, but I also wanted these to use these guys 'as is' and for them to stand out. Having them on their own 2x2 bases seemed the perfect solution, as well as allowing me to bump up the size of the units I can field.

I also managed to pick up these cheap from Ebay. I really am having all the luck with hobby auctions atm: 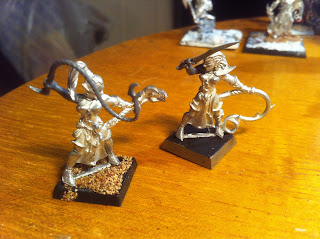 They're cool, but I really have no idea what I'm going to use these ladies as. There's no option to field Beastmasters on foot any more unfortunately and the Beastmaster's Scourge isn't even a weapon any more! They might make some rather nifty looking unit champions for my  planned Witch Elves or perhaps some chariot crew. I'll have to have a think.

I've been managing to keep up my painting progress quite well, putting in about three hours over the last week and a half. I think what's most surprising is that I've actually been able to stick to working on one army project for three weeks in a row. This has been massively helped by the fact that I picked up one hell of a bargain on Ebay for some old metal Corsairs (I know, painting points...shhh...).

In my opinion, these guys are one of the best GW sculpts of their era, much better than the ridiculous looking plastics which followed them, as well as having far more 'grit' and character to them.  I've been wanting to pick some up for ages, but they generally go for silly prices. Naturally, when I found a listing for 30 of them for £25, I couldn't really pass up the chance to grab them.

They're such lovely models that I couldn't resist getting started on them straight away: 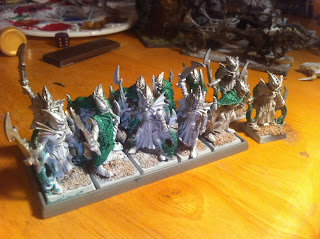 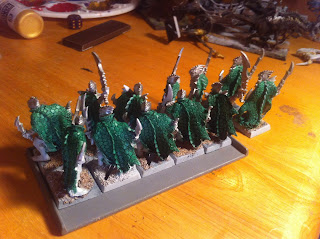 At the risk of overmaking my point, they're a joy to paint too. I've always struggled to get going when painting the plastics, finding the models just a little bit too cluttered and undefined in places, but these almost seem to paint themselves. I managed to get this stage in just an hour or so. The movement tray is just a temporary addition to keep them together in one place.  I'll be making a fully magnetised one to replace it later on. The other 18 need to spend some quality time with a stripping tub, so I'll probably get these initial 12 done before expanding it into the larger unit.

In case you're wondering, I haven't abandoned my previous unit. I've made a little more progress on the Executioners/Beastmasters too: 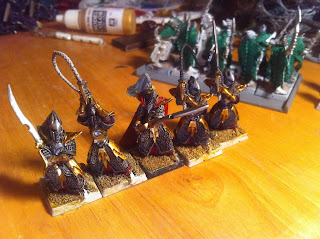 Once I've worked out what colour I want for the edging of their chainmail, I think they'll just need a few final highlights and washes before basing and I'll be able to call this first rank done. The rest of the unit will probably have to wait until after the Corsairs are finished though.

That's all for now. I'll post more soon!
Posted by Khorneguy at 20:21 No comments:

I've actually been quite busy hobby-wise since New Year, having clocked up about 5 hours worth of painting time. Doesn't sound like much, but it's more than I managed in the last three months of 2016, plus it's more than my 'scheduled' amount from my hobby pledges, so it's a massive improvement in productivity. Unfortunately, I've been quite busy on Ebay too, so my painting points have become skewed further than they already were. I needed some Bolt Throwers for a campaign game though, so it's not like it was impulse spending. It served a purpose. That's what I'm telling myself anyway

Either way, I've decided to focus on my Dark Elves for the first part of the year. I'm doing rather badly in my club campaign atm and everybody knows unpainted models perform badly compared to their fully-painted counterparts, so it's time to fix that. Besides, eight years after starting a project and two years after the death of the game the associated with them seems quite long enough for the competion of an army to be overdue by! 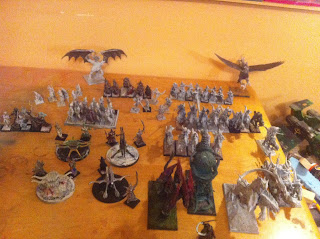 As you can see, that's a huge amount to work on. Luckily the huge amount of casualties I took in my last game means I have a much smaller pool to focus on (silver linings and all that...). I decided to start with my Executioners/ Beastmasters: 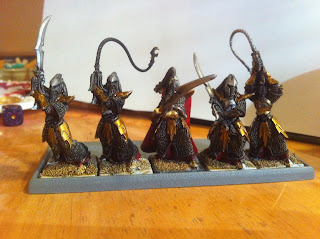 These are about two-thirds done. I still need to add a few washes and highlights, as well as finishing the bases. Obviously this isn't the full unit. I still have about twenty more to paint, but I figured it's easier to work on a rank at a time rather than demoralising myself by trying to tackle all 25 at once.

At the same time I started work on a pair of Sorceresses. I wanted to try something a little different to my normal skin recipe for Elves/Eldar, aiming to convey the kind of unhealthy pallor which the Druchii are likely to have. Living in perpetual winter and dabbling with the unnatural doesn't tend to help the complexion... 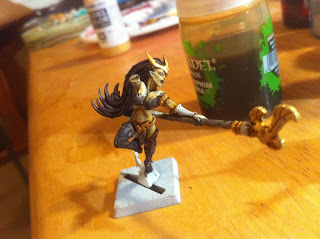 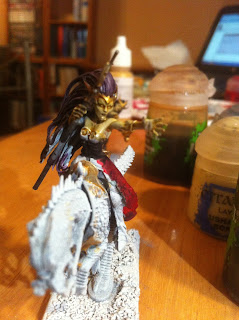 I quite like how the skin tone has turned out, even though it could still use a little cleaning up. I'm not always the best judge of these things though, so any thoughts or comments on it are very welcome, especially as it's a new technique I'm trying. I'm still in two minds whether or not to extend this recipe to all the elves in my force or just save it for the magic users. I'll have to give it some thought.

So there you have it, all my hobby progress for the first two weeks of 2017. It's not fantastic, but it's a start. I'm hoping to get these guys done by the end of January.
Posted by Khorneguy at 20:08 No comments: