In my excitement to talk  about my Watch Captain yesterday, I forgot to add my other piece of progress. This guy is even closer to being finished than Wulfenhien is! 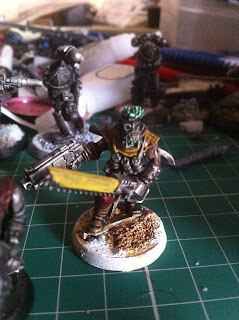 He's only a bog standard member of one of my Inquisitorial Henchmen squads, but I'm loving this guy. Built from the unlikely combination of a Chaos Cultist and some leftovers from the Betrayal at Calth box, I was aiming for a kind of Underhive Mercenary feel for the model.

Really it's just little bits left to do now. I need to pick out the rope of his 'grenade necklace' in grey, add another layer and wash to his chainblade, then he's done, apart from obviously cleaning up his base.

A quick little conversion, simple paint job and a painting point for me? That will do nicely!
Posted by Khorneguy at 08:00 No comments:

I've been plodding ever onwards with my daily painting and surprisingly I've been quite productive. I'm almost at a stage where I'm actually finishing some models and earning some of those elusive painting points. Wonders will never cease!
Most of my efforts have been going into my Deathwatch Watch Captain, who's now pretty much done, minus a few details, such as his right arm and base: 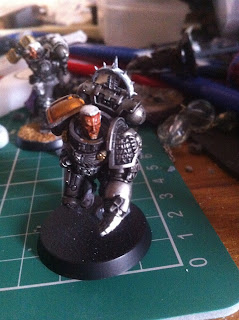 This guy has been onw of my favourite models which I've worked on for a long time.. He represents my hobby journey pretty much coming full circle, tying my current projects in with some of my very first forays into the hobby 15 years ago. Basically, his background is that he's the last loyal member of the Golden Knights chapter, out for revenge against his traitor kin. In case you're wondering, the Golden Knights were the first army I ever collected when I got into 40k when I was 13. They were my homebrew chapter who went traitor and pulled double duty as Loyalists or Chaos as required. They were led by the infamous traitor, Elgran Wulfenhein, who went from humble Captain, to Chapter Master,to Chaos Lord and finally becoming Deamon Prince - before he developed a nasty habit of sprouting 4 Lascannon shots in the chest each game and reverted back to Lord status!

This new guy represents Arik Wulfenhien, Elgran's brother. He was on a far flung mission when the Chapter fell to Chaos and returned to find them declared Excommunicate. Vowing to kill his brother and restore the honour of his Chapter, he served my Inquisitor, Rikard von Nearostaffen for many years before finally joining the Deathwatch, on the sole condition that if word came of the whereabouts of his brother, he would be allowed to join the hunt to destroy him and the rest of the traitor Golden Knights.

It's perhaps a little tragic that he'll never get the chance to do this now. The Golden Knights were sold off about 6 years ago and I have no plans to recreate them. Arik will probably never get his vengeance!

I'm loving being able to tie my latest projects into my personal hobby history and it helps that the Artemis model is a joy to paint and convert. He'll eventually be getting a fancy bionic limb and a Storm Bolter once I can source the right bits for it. This loadout is far from optimal in the DW, but it's another nod to my hobby history, this time being the Kantor model I was using for the last few years to represent my Deathwatch Captain before they got their own codex.

Hopefully I'll be able to finish this guy this week. Like I said, he just needs a few details and a clean up. I've decided to count HQ models as 5 painting points apiece, otherwise there's no incentive for me to put in the extra effort to bring them up to the standard which Wulfenhein is going to be when he's finished.

I'll post more soon!
Posted by Khorneguy at 20:53 No comments:

Despite the fact I got my Hydra ready in time, Monday's campaign game was an unmitigated disaster. Long story short, far  more Skaven turned up than I expected and a Dwarf force less than a quarter the size of the other two forces managed to win by hiding up in a Watchtower and shooting anything which came near. I conceded 1870 victory points whilst only scoring 320 of my own.

I think my problem came (aside from being thoroughly out-pointed and suffering from terrible dice luck) from having too many monsters and not enough ranked units.

Luckily, it's simple enough to fix that, so I've started batch painting the Corsairs which have been sitting in a box in my gaming cupboard for ages. 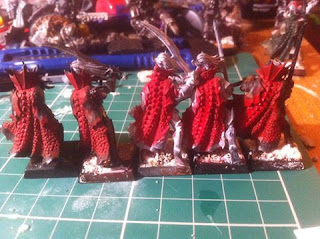 I've only done the basecoat for now, but I'll be adding washes when I get home later. The fun bit is going to come once they're finished and I can start magnetising the bases and building the magnetic movement tray to go with them.
Posted by Khorneguy at 04:47 No comments:

I've taken a couple of days off my hobby challenge this week - flu and stomach bugs are not conducive to good hobby progress. Now I'm feeling better though and I've been able to get back to it, I've decided to tackle my new Hydra next. This is partly due to needing it for a campaign game and not wanting to break my 'only game with painted models' rule, but also because it let me indulge in one of my favourite hobbies within the hobby: rescuing Ebay models.

This one arrived with me in a shocking state. Serious it was like it was painted by a five year old. The paint was a full 1mm thick, obscuring all detail. I really wish I'd taken a picture before I scrubbed it down, so you could see it in all it's terrible glory. Worse yet it was Finecast, turning my usual method of a long soak in Fairy Power Spray following by furious scrubbing into a dicey proposition at best. After a short think, I decided to risk it and it was unceremonious dumped in the stripping tub within 20 mins of it arriving in the post.

After much work, I got it as clean as it was going to go. The next step was obviously to rebuild it, undercoat and basecoat it, leaving me with this: 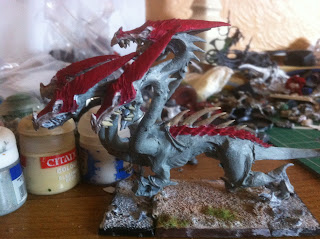 Not bad at all considering the amount of work it'd taken just to get it to this point. Next up was a liberal application of Nuln Oil, taking it to this: 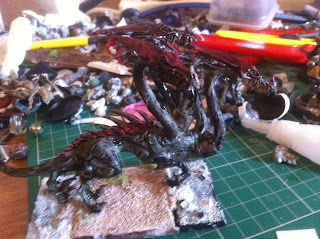 Pretty nice looking if you ignore the base and the missing leg. These will be fixed shortly along with the addition of much more layering and highlighting.

The manacles you may be able to make out on two of the necks are plasticard hoops I've added to conceal the worst of the damage to the neck joints. I'll be adding modelling chain at some point to make it look like it's broken free and is on a rampage. I've also deliberately left a few moldlines showing, which will be painted to look like scars where it's regrown limbs.

So there you have it. It's not brilliant by a long shot and a long way from done, but it's good enough for gaming tomorrow night at least. It's weird to think that a few years ago, I would have considered this paint job to be the finished model. It really shows how far I've come!

My self control crumbled and I bought Death Masque. I know I'm meant to be painting more than I buy and I know this pushes my total massivvely more into the red than I was already, but it was a moment of weakness. I just got paid for my first month in a new job and I wanted to treat myself. I have no regrets.

I have to say, the box is an amazingly good deal. You get an impressive amount of plastic in there for the price, plus a mini-rulebook, finally giving me a copy of the 7th edition book to use. The character sprues are beautifully done and really show off what they can do with plastic these days. The only bad note is that the background included in the booklet is somewhat questionable, considering the implications for the Eldar race as a whole, but it's really no worse than GW's standard fare. All in all, the box is a pretty sweet deal, considering I plan on making use of everything which comes in the box, except for perhaps Eldrad. 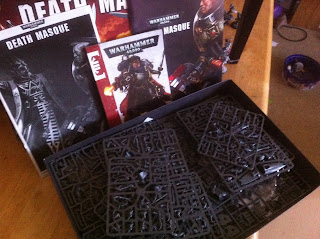 I probably also shouldn't mention the Dark Elf Hydra I also bought off Ebay, which veers me even further from my goal. It was at a price I couldn't refuse and I needed it for my Fantasy campaign forces anyway. Also my order for magnets arrived, but those have no bearing on my painting points total, apart from allowing my to work on updating my Dark Elves.

I suppose the moral of this post is that impulse purchases are bad for painting discipline. Here's the breakdown on the hit my points total took, as far as I can work out:

Ouch! It basically means that I won't be buying any more models for at least the rest of this year (unless the rumoured 1k Sons vs SW box tempts me!). Although it looks quite terrible for now, it's not the disaster I thought it'd be at first. With the arrival of the magents, I should be able to chip quite a bit off this total in short order, by working on my Dark Elves. Fantasy armies have a lot of models and are fairly easy to paint. The extra Deathwatch pads which come in Death Masque also let me finish up my existing Deathwatch units very easily.

I suppose I'd best get cracking.

Posted by Khorneguy at 21:06 No comments: