I'm not sure if this counts as progress or a step backwards. 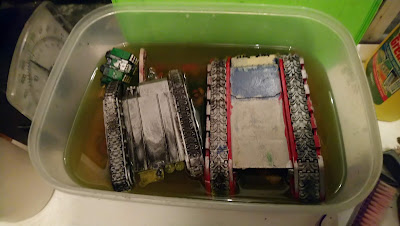 I haven't really managed to do much over the last couple of days. The return of this seemingly endless heatwave has competely sapped my energy to do anything again, so I haven't been feeling up to doing any painting. I did however put a load of my old tanks into strip, ready to be rebuilt into the service of my XVth Legion.

I also stripped a load of my Deathwatch and Inquisition stuff, ready to hopefully be repainted at some point in the near future. 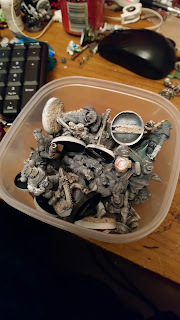 I've never quite been able to get my Deathwatch to look exactly how I want them, so they've been repainted more times than I can count. I've found a good recipe I want to try though, so hopefully this time will be the last. I just need to find the time to paint a test model at some point.

So yeah, not exactly progress of the traditional sort, but I wanted to put something up to keep in the habit of posting on a semi-regular schedule. Even if it turns out that I'm talking to an empty room, blogging still helps me stay motivated and focused on my various projects, so that can't be a bad thing.

Hopefully I'll have a proper batch of progress to show you guys in the the next couple of days though. I just need this ridiculous heat to go away so I can focus.
Posted by Khorneguy at 09:49 No comments:

My run of random 30k productivity seems to be continuing.

This time I've made a start on a crewman for a Quad Mortar and made an Apothecary to go into my Breachers. Both are needed for my planned 3000 point force, but neither are what I'd planned to do when I sat down to hobby after work today. I'm starting to think that I really shouldn't question where my hobby-addled mind takes me. Random progress is still progress after all! 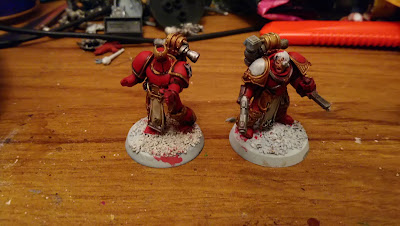 Both are pretty much done, apart from a few details, plus obviously finding a right hand for the crewman. Hopefully I can get both finished by the end of the week, then I just need to cobble together a second crewman for somewhere.

I've just got to hope that my hobby mojo doesn't fizzle out!
Posted by Khorneguy at 08:36 No comments:

Got my mojo back

It seems that motivation has hit me hard this week. After weeks of not doing much at all, I appear to have my new Consul nearly painted in no time at all! 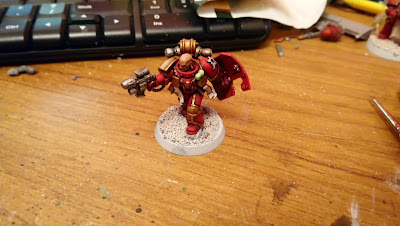 I just have a few details left to finish on him, like the Crystals/ Phosphex Bombs on his chest and a little more highlighting, then he'll be done.
Background-wise I've decided that he's called Mal Mephret, a powerful Telepath whose skills have proven useful in guiding subterranean assaults towards their target, allowing for some ruthlessly efficient attacks using Termite Assault Drills.
In-game it'll be nice to be able to deploy a psyker up close and personal on turn one in order to dish out a Psychic Scream whilst his Breachers get on with the task of reducing the nearest vehicle to molten slag using their Meltaguns!

I'm pretty happy with the way he's turned out and he'll bring my total of painted Thousand Sons up to roughly 1800 points. That combined with the Quad Mortars which I've recently repainted takes me to well over halfway through my current 3000 point list, so things are shaping up quite nicely.

Hopefully I'll be able to paint up some crew for my Mortars next, as I need to do them for my two week hobby challenge, then I can move on to more important and interesting projects. 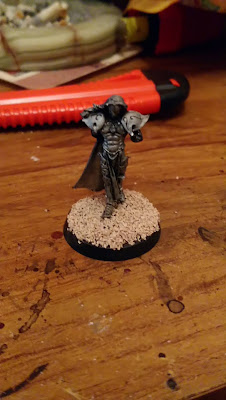 I bought the Sigvald model last year for a Lucius conversion, but never actually used him in the end. I found it abandoned in my bits box so I decided to base him up.

I'm not actually sure what I'll use him for yet, but I'm sure I'll find something. He's most likely to end up being used as the Masque for my Daemonettes. I've also been tempted to try Age of Sigmar recently though, so he might end up just being a Slaaneshi Lord. I'll have to see. I've got to try not to get too distracted though.

Hopefully this productive streak continues and I'll post more soon!
Posted by Khorneguy at 21:14 No comments:

It's been far too hot to really get much hobby done recently. With a massive heatwave ungulfing the UK atm, it's been a struggle for me to do much at all, let alone sit down and get some hobby done.

Then last week Forge World managed to spur me into action by finally dropping the long awaited 30k FAQ. It's given the game quite a shake up and forced me to change my plans for my Thousand Sons a little. That's not a problem though, as it gave me an excuse to make myself a new Consul: 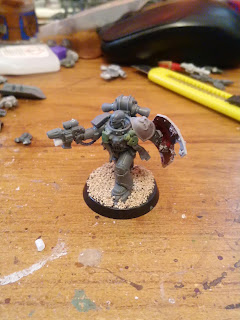 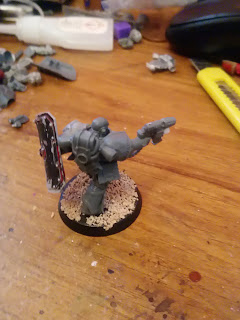 He's going to be used as a Siege Breaker to accompany a unit of Breachers in a Termite.

He was a surprisingly quick and easy build. I used the Cassius model from the Overkill box as a base and added a boarding shield which I've been meaning to use for years now and that was it, apart from turning his pistol into a compact Combi-Plasma.

I'm really pleased with the result and hopefully signals the end of my heat-induced hobby funk.

Next up is painting him, along with hopefully pulling together that Necromunda post I promised you guys!
Posted by Khorneguy at 10:04 No comments: