I seem to have gone from very little painting progress to massive amounts in a very short space of time. I finally found some time to myself the other day to sit down and paint. Three hours later, I was somewhat stunned at the results.

Firstly, I managed to repaint an entire Sentinel squadron: 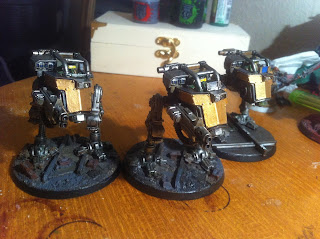 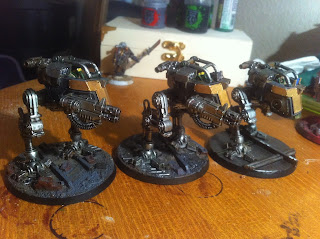 These are the first of the Elysians I bought from a mate the other week. They're a unit which are going to be pulling double duty in my Ordo Xenos and 30k Militia forces, so I kept to a very simple colour scheme which could work in either era. I think they turned out really nicely considering how quickly I got through them. They're certainly not going to be winning any painting awards any time soon, but they look good and it's a really quick and easy scheme to replicate on the rest of the force. I should be tackling some infantry to go with them as soon as they've been stripped down.

The other unit I got pretty much finished was these: 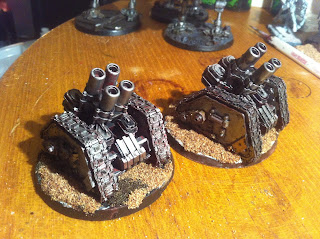 That's a pair of Quad Mortars for my 30k forces. These are also going to be pulling double duty between my various 30k forces (seeing as I don't fancy shelling out £30-ish a gun so I can have them in the correct colours for each army), so with that in mind I kept them to fairly a fairly neutral gunmetal silver. Fluff-wise this can be explained by saying they were salvaged from warzones as the Heresy went on, so there wasn't time for their new owners to repaint them.

What I will be doing at some point though is painting up crewmen for them in Thousand Sons, Sons of Horus, Night Lords and Militia colours, so at least the guys manning the guns will be correctly attired. I know I don't play Night Lords, but a friend of mine does and he likes to borrow them whenever we have a game, so I figured it'd be a nice touch to have the right crew for him too.

So that's 30 painting points for me for the Sentinels, plus another 10 once I've run a wash over the base of the Quad Mortars. I didn't realise until I took photos just how much of the white under the basing sand showed through. That's easily fixed though.

Lets hope this productive streak continues! You never know, I might even be able to finish that Whirlwind Scorpius this week too.

Oh and on top of everything else, I managed to get a game in vs my local Emperor's Children player. I'll leave you with the photo I took of the exact moment it all started going wrong for my poor Thousand Sons. I need more AA... 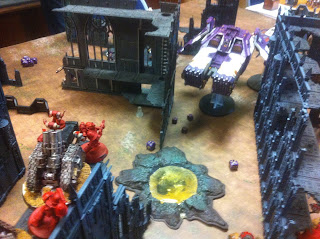 Posted by Khorneguy at 09:44 No comments:

It's been a busy few weeks for me, unfortunately very little of that activity has involved the hobby. As ever real life has been getting in the way. I have managed to make some progress on one or two things though.

In the little free time I've been able to snatch, I've been working on this: 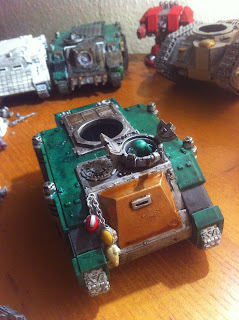 It's the Whirlwind Scorpius for my Sons of Horus which I've been meaning to get around to repainting ever since I stripped it down about a year and a half ago. Other projects and a new job distracted me somewhat since then, but now that I'm settled into work and I'm trying to reign in and tighten my hobby focus for a while, I can hopefully turn my attention back to it for long enough to actually finish it.

To be honest, it's taken me far longer than I want to admit just to get it from the undercoat to this stage. My paint scheme for my Sons of Horus is time consuming to begin with and I really struggle to paint tanks for some reason, so that's slowing the whole process down. I'm actually starting to miss the days when I wasn't that good at painting, so could churn out whole armies in just a few months and not worry about it so much!

If I can stay focused though, I'm hoping to get the bulk of it painted this week. I've got a couple of days off coming up, so I'm hoping to use some of it to finish up the weapon system and detailing, leaving me with just the commander to get done. I've got a couple of Contemptors I want to work on for my Thousand Sons too, so hopefully I'll at least get the base colours down on them.

Anyway, I'll post more soon. I'm hoping to get back into the swing of things again blog-wise and try and get back to posting at least on a weekly basis, if not more. I'll have to see how that pans out though. I know how terrible I am at sticking to plans.
Posted by Khorneguy at 21:21 No comments: