Is anyone else sick of Dreadfleet?

It's nearly a week since Games Day and I, like I'm sure many others have, logged on to the GW website to get a look at the pics from Games Day and all the lovely hobby goodness and craziness that I might have missed on sunday featured in 'What's New Today', as they do every year.

But no, instead I'm confronted with some coverage of it in mondays post, then tuesday they were back to their constant coverage of Dreadfleet, with no mention of Games Day what so ever.

Don't get me wrong, it's a nice enough game and I get that they've got to get people interested in it, but only having a passing coverage of their premier event on their own website?

Really not good GW. At least chuck us a couple of photos of interesting thing or models from GD a day, at the end of the post after the Dreadfleet stuff.

Personally I think it's because of the organisational hell they had and they don't want people to see how ridiculously overcrowded it was.

Either that or the GD stuff will come flooding out on monday after Dreadfleet's out there. Or maybe not, they'll just start showing people playing Dreadfleet or people's painted ships, etc, trying to milk the should've-been-Man O' War cash cow for everything it's worth, having already milked our GD money out of us.

*I* probably have more coverage of GD on my blog than GW has - and i broke my camera 9am Sunday!

Ok rant over. Normal service will be resumed shortly
Posted by Khorneguy at 17:21 1 comment:

Games Day made me ill.

It always does. I don't know what it is about it, whether it's the 10,000 geeks packed into the same space, the constant noise or my usual all-nighter the day before, but it does. My voice went round about 11am Sunday and still hasn't returned and i've got the flue from hell.

I lost yesterday completely, falling asleep as soon as I got back 10pm Sunday night and waking up 11am this morning. Not good, especially as I was due in Uni yesterday.

But all in all it was worth it. Yeah, i know people complained about the queues, but as long as you weren't fussy what time of day you got your stuff, it wasn't so bad.

I managed to bag the following 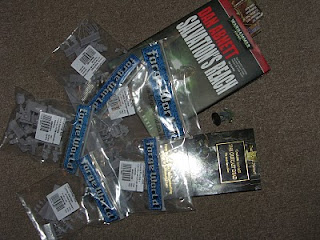 - Salvations Reach, unsigned unfortunately, due to the queues, but a damn good read nonetheless. I've been forcing myself to keep putting it down to get some uni work done.

- and finally, a single Scout Marine from the Rites of Initiation. Rather handy, as I've been trying to work out the best way to make my Wolf Scout with Mark of the Wulfen without having to buy an entire Scouts box


I also struck up a few interesting conversations. I went to the Warseer meet-up, saw Harry and co. They seem nice sorts, but i mainly ended up talking to the guy who goes by the name ChaosAstartes about the nature of Khorne and martial honour.

I also went out to smoke and got chatting to a fellow Space Wolves player about Thunderwolves conversions (Bloodcrushers are the way to go!) and the Sons of Russ in general.

Right now GD's out the way, back to my projects. My question to you is, where next? Thousand Sons or Space Wolves?
Posted by Khorneguy at 18:12 6 comments:

Ok on the coach on the way back from GD UK. So the plan for pics completely backfired. The camera packed up the moment I went to take a picture of that gorgeous drop pod outside. Instead i will try and put together my recollections.

- First of all I spoke to Jervis Johnson. We had a talk about the lack of army-specific magic items in 8th ed fantasy and he said it was to make it easier to control balance between army books. I tactfully 'forgot' to mention the Ogre Kingdoms Hellheart

- Next was Matt Ward. I tried subtle sarcasm by say 'I really like how you've made the most elite army in 40k even more powerful and elite'. Either he's used to this kind of thing or it went way over his head. I would've spoke to more of the team but a crowd was building by then and i wanted to beat the scrum to Forge World.

- Both new Forgeworld and Warhammer Forge books were on display, with IA11 featuring guard and Space Wolves fighting Eldar. there's a range of Eldar Corsair army lists to draw your army list from, including the Shadow Spectres.

Bram Redmaw is being released. A rather taSty model i must say, but they kept pretty tight lipped about the possiblity of further releases, namely Thunderwolves. They claimed anything from maybe to not even in the distant pipeline, depending on the designer I spoek to. The GW design team kept mysteriously quiet about this too, almost like they weren't allowed to say anything...

- Warhammer Forge was interesting. Apparently they're going to focus on the 'tech and cogs' side of things, being more interested in magic and beasts.

- There will be Elementals for all main BRB lores. For now they're keeping them as bound monsters for Storm of Magic, mainly because of worries of balance and points-cost issues if they had wizards being able to summon them in normal games.

- No Dark Elf stuff is planned at Warhammer Forge, as they've yet to have an inspiring-enough idea for them

- Warlord Titans are a definate possibility, with the new Phantom Titan being about as tall as a Warlord would be

- The queue for sales was ridiculously long, with Forgeworld, Black Library and mainstream GW sales being crammed into a tiny area, resulting in extreme congetsion, with people queuing through the gaming area and waits of over two hours to buy anything. GW, if you're reading, bad call...

- No mention of future releases from GW, nothing was even forthcoming about next months releases

- There was however a massive WoTR display board witht he Battle of Five Armies. Interestingly, there was an unfamiliar Bear model on one corner of the board (future Beorn release anyone?)

Right, I'm going to get some sleep. I'll post more as it occurs to me
Posted by Khorneguy at 16:34 No comments:

Madness I tell you! 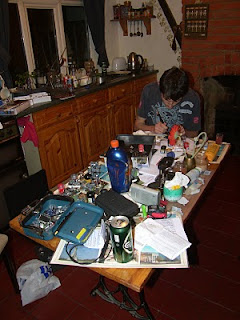 Well it's 3am here and we've been up all night painting.

That's right, we left our Golden Demon entries till the night before.

We aren't expecting to get far, using them as more of a reason to get into Games Day at nine rather than ten (thus ensuring we can grab our seminar tickets), but it'll nice to get through to the second round. 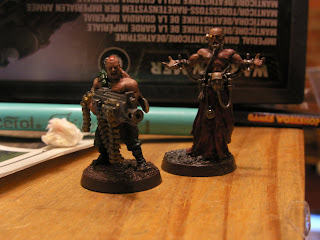 Mine is the Psyker, my friend Johnny's is Harker. Not bad considering the short time available to us. You'll be seeing more of Johnny's army in the near future as he has graciously let me photograph his fledgling Catachan force as it takes shape.

More updates later, i'm taking an internet dongle with me so hopefully i'll be able to post updates as the day goes along
Posted by Khorneguy at 02:54 No comments:

Well with less than 24 hours to go, the excitement is palpable. Me and my friend have decided to stretch the excitement out even further and make a weekend of it.

Ignoring these "Mini Games Days" happening up and down the country at GW stores, we're celebrating in our own way. We're not sleeping tonight due to the fact that we have to up at 3am, so instead we're grabbing a few beers, few mates and playing an all-night 40k game.

If we've got time after that, we're having a painting session, before walking down to catch the coach for the big day itself

Once we're actually there, i've got a list of things i want to check out, also I'm picking up my Forge World order of some pre-heresy marines plus weapons and a Contemptor Dreadnought to kick off my planned Pre-Heresy army properly. I'm still teetering between doing Thousand Sons or Space Wolves, but I may see what Forgeworld are bringing out Space Wolves-wise with the next AI book before deciding. Or else do both, given my love of both Legions

I'll post what i can up tomorrow, but you might have to wait until early next week before i can.

Anyway, off i go, wish me luck. I'm off to game, drink, be merry in the highlight of my gaming year
Posted by Khorneguy at 10:36 No comments:

They won't say what it is for obvious reasons, but anyone heard any rumours about what this might be?

It seems to be something major, seeing as according to the map, nearly a quarter of the design studio area is given over to it

My gut instinct is one of three things:

1. The Hobbit. With the film due next year, then it would make sense to announce it now. That said, i doubt that GW would be allowed to show likenesses of characters, etc. so far in advance of the release date and it seems like an awfully big area just for an announcement with no figures

2. Dreadfleet. Yes i know it's not a mystery any more, but we don't know when this guide was published/ sent out to stores. I know GW has had a huge crack down on leaks and rumours this year, so it could just be them covering their tracks in case one got out before last weeks announcement

3. Something completely new that's slipped under the rumour/leak radar, in which case i say well done GW...

Whatever it is, I'm going down there on Sunday, so i'll be able to tell you first hand what it is, hopefully with pics too.
Posted by Khorneguy at 20:25 No comments:

After a long hard slog, i'm finally there. The mind has been focussed for once!

While i don't have any images of the finished army right now, what with them laid out on my desk for final detailing, i can assure you i am bang on schedule to have them on display for 12 Noon today. Here's a shot of the board from earlier today. 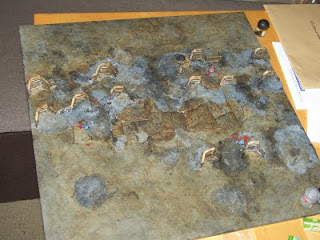 I think i need to make the earth mounds look more scorched and war-torn, but that might just be the camera flash.

More images, including the whole finished product are coming in the next few hours, just before i pack them away for transport.
Posted by Khorneguy at 23:13 No comments:

Armies on Parade: 8 Days to go

It's 8 days to go until the UK Armies on Parade and all the materials i need for my entry have finally arrived.

The plan is have my Blood Pact overrunning an imperial defence line, with all sorts of gribbly chaotic support.

So now with the board, aegis line, a bag of filler and a box of guardsmen for desecration/ fallen victims, i'm finally entering the last leg of this. If i stick to the schedule i've made for myself i should get it done in time. Wish me luck

Here's how it looks at the moment, but obviously the finished thing should be far more impressive 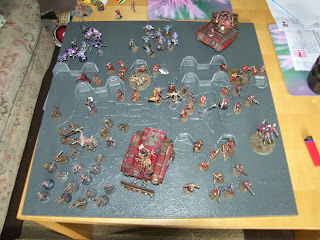 I'll keep you updated on my progress

Posted by Khorneguy at 11:11 No comments: