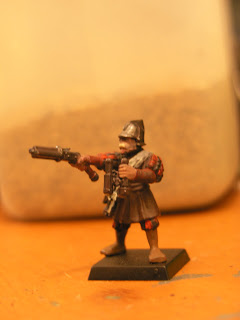 This is 'Skraggy' Thror (There's Cookies and Nerd points to anyone who can tell me where the name comes from), an Engineer assigned to Von Nearostaffens control, who's been convinced to become the test pilot for the flying machine.

He's been converted from the Helstorm/Helblaster crewmen and the Outrider kit.

The base he's on is a temporary thing. Eventually he's going to be mounted on the prow of the machine, bawling instructions to his subordinates.

Talking of the airship, here's how it's coming along... 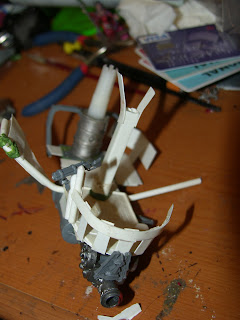 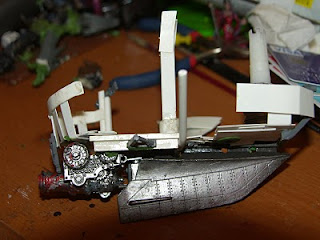 I've also started work on the gas bag, using artists gum tape around a drinks bottle to form the shape of it, then using green stuff to start creating the ropes and rigging that's going to tether it to the hull of the ship 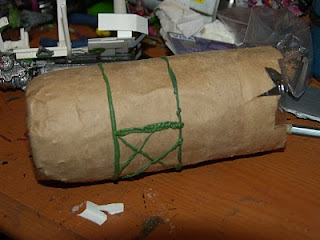 and here's the base i'm creating for it, mid-paint. It's going to bethe job from hell trying to get the ship to stay on the flying stand but it'll be worth it 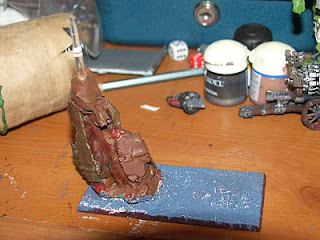 Yes that is a Druchii trying to strangle a Cold One.

This is my latest batch of count-as Witches. There's enough there for 15 all told, including unit fillers and they'll be be undercoated and painted as soon as this post goes up 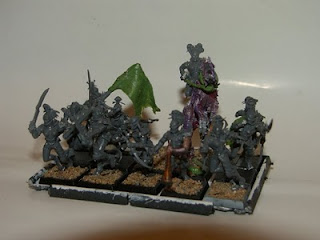 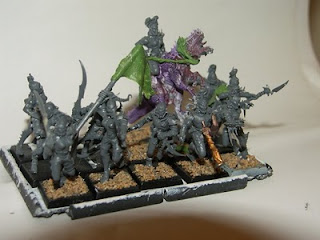 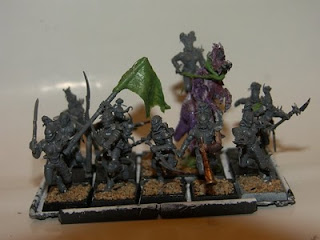 I havn't neglected my other projects though. Progress on my Engineer-based Empire force will be updated soon and my Thousand Sons will get their day in the sun when the Grey Knight codex and the shiny new, kitbash-able to be Pre Heresy GK Terminators arrive.

I'm finally getting through my project mountain
Posted by Khorneguy at 14:59 2 comments: 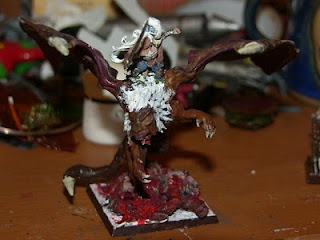 This is taking far longer than i expected but as my general that's only to be expected really. I'm showing progress here but this is the real reason why I'm posting... 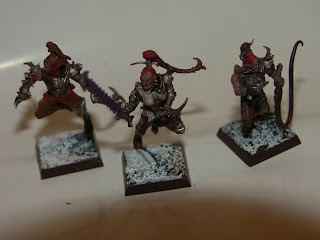 Beastcatchers of Kar Karond aka. Witch Elves, converted from the new Dark Eldar Wych kit. All in all i think it's quite an effective conversion. Simple too. All i had to do is clip off the splinter pistols and attach the tabs to 20mm square slottabases


And finally the dab of magic in the form of my two Lv 2 Sorceresses, Beccar and Luhna. 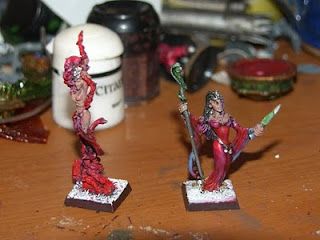 Beccar, the one in the dress is the physical manifestation of my fiance on the battlefield, after she borrowed the model for an intro game i played against her (my gobbos were massacred mercilessly by her) and since I got it back it's been incredibly lucky, with no miscasts at all and three lucky escapes from death against Ogre hordes. with a bit of luck it might break the dice curse that seems to have fallen over me over the last few years. Maybe

Anyway, comment away guys, let me know what you think (I'm getting paranoid noone's actually looking at this stuff) and I'll be posting progress on the Winged Contraption sometime soon, along with the beginnings of the Empire army to go with it, plus fluff.

Has anyone worked it out? 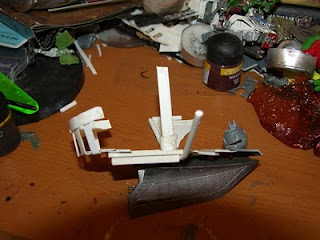 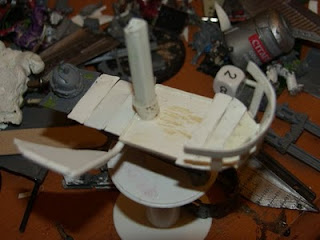 It's the start of a Steam Powered airship that I'm building for my planned Nuln-based Empire force, after being inspired by seeing this on Warseer (scroll down a bit to see it).

It'll be a very slow project due to my lack of funds until May (gods bless student loans), but i have a large supply of plasticard and no less than 12 bitz boxes to draw on, so i'm cobbling together what i can.

Anyway, turning our attention back to the Winged Contraption itself, my aim is to create a set of wings to propel it forward similar to Leonardo De Vinci's flying machine and having it held aloft by a Zeppelin-style gas bag. Hopefully it should turn out looking awesome, but I'll just have wait and see.

What do people think so far?
Posted by Khorneguy at 11:40 No comments: 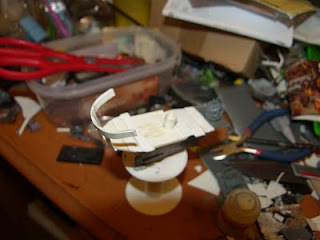 See if you can guess what this is going to become...

Answers and progress coming soon
Posted by Khorneguy at 11:06 No comments: