Granted it's not the same unit as yesterday, but at least it's progress.

Today I want to show you the other allies for my Ordo Xenos which I've been working on alongside my Sundered Veil Harlequins - Deathwatch Kill Teams! 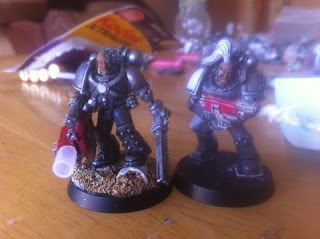 I'm going  to be fielding two to four squads of these guys, depending on whether I use the WD Deathwatch rules or represent them using the First Company Strike formation from the SM book. It's a shame the WD rules only allow a single, non-customisable squad to be used, but at least it's something I can pull out for smaller games, then I can use the 1st Company detachment if I want more in larger games.

The guy on the left is my WIP Frag Cannon guy, for when I use them as Squad Donatus. I've got a ton of Deathwatch pads on the way, so I'll be able to really crack on with the squad as soon as they arrive.

Posted by Khorneguy at 17:11 No comments:

Harlequins of the Sundered Veil, WIP

Remember my last post where I said I'd post more pics of my progress within the next couple of days? Well that was nearly three months ago! I'm shocked at this tbh and I can only apologise. My life's been a somewhat chaotic mess for the last few months.

Lack of blogging doesn't mean I've been idle though. I've just been spending what hobby time I had painting and playing rather than blogging. I've been forging slowly forward with my various pledges, getting a friend into 30k (he now owns a mighty force of Night Lords) and gathering the components I need for my Inquisition. Now my life is a little more settled though, I should be able to return to a more regular blogging schedule (in theory at least). At least I've been keeping up a good tally of games played. Now I just need to catch up with the rest of my pledges

Most recently I've been working on the first Troupe from the Masque of the Sundered Veil, the Harlequins which are intended to be allied to my Ordo Xenos force. 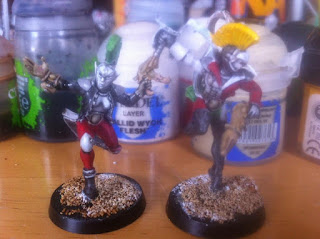 There's still a long way from done, but I'm loving how they're shaping up. The new Harlequin plastic kits are a joy to work with. They were so nice in fact, I launched right into working on them as soon as I got the kit home. These three guys were at this stage only six hours after opening the box!

The only real downside is that the new Harlies don't have chainswords like they did back in the 80's, so a few of them are going to be getting one later. I'm going to use them as Harlequin's Kisses - I imagine Harlequins can do *very* creative things with chain blades!

Hopefully this surge of productivity marks the start of period of high output, so I should hopefully have lots more to show you in the next couple of days.
Posted by Khorneguy at 21:44 No comments: