"Build me a board worthy of Mordor"

I've been away from this blog again for a while. Summer at work and rapid fire Pokemon Regionals  in September have basically meant that I've had to choose between blogging and actually getting hobby done. I'm sure you'll forgive me for choosing the latter!

What have I been working on, I hear you ask? Well, considering the fuss I've been making recently about being organised and getting stuff done, you'd think that I'd not be buying anything new for a while.

So did I. Then a deal came along which I couldn't really say no to. 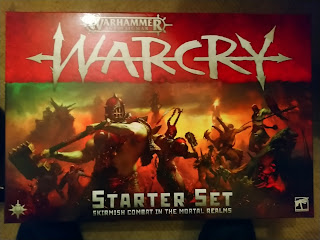 Don't worry, I haven't gone out and bought yet another game (Well, technically I have, but hear me out...). What I was really interested in from the set was the terrain: 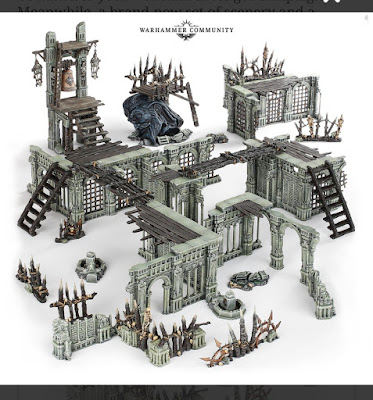 The moment I saw that photo, I thought "that looks like it would make a great Mordor Fortress". I've been playing a LOT of Middle Earth recently, but I don't actually own a whole lot of terrain suitable for playing it on at home, so this seemed like a solid place to start building up my collection.

What really sealed the deal though was the fact that I had two seperate friends who wanted the Warbands but not the rest of the box, making buying the box just for the terrain a very affordable proposition.

So I dived in and got to work. After a few hours of clipping and building, I ended up with this: 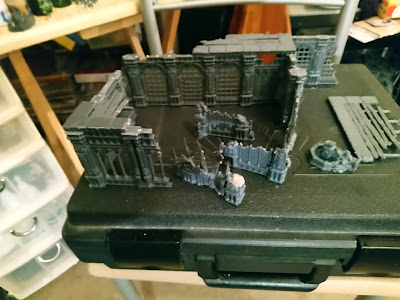 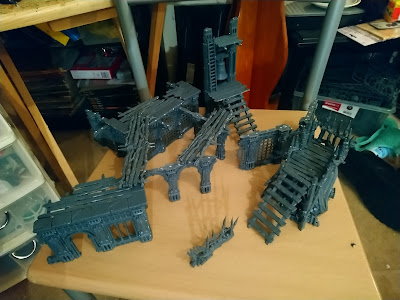 Not a bad start I think. The trick was working out how I could make it look good, but also making it easy to play on, especially as LOTR involves a lot of fiddly positioning.

In the end I decided to make several smaller pieces rather than making one or two large buildings, so I have maximum flexibility to change things up between games. This ran into the slight problem of there not being a whole lot of height to them though. I think I can solve this later, when I start adding extra elements beyond Warcry stuff. For now I feel it's a fairly solid core of buildings to work from.

Next came painting. I didn't want to go to nuts with the paint scheme, but I had a pretty clear idea for what I wanted. Most of GW's Middle Earth ruin terrain is painted to look like white stone, obviously going for the look of Osgliliath, or a recently captured settlement. I wanted mine to have been occupied for longer, so I wanted it to look like the filth and darkness of Mordor has really taken hold.

I decided that Cirith Ungol from Return of the King would be my best reference point, as that was built by the men of Gondor, then corrupted by Orcs.

With that in mind I started to experiment with various sprays: 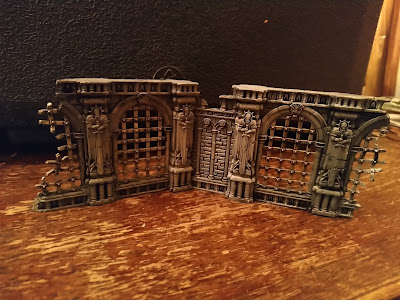 This was done with Chaos Black as a base, a fairly heavy layer of Mechanicum Standard Grey sprayed on the top, followed by a light Corax White, a Nuln Oil Wash, then a light drybrush with Mechancium Grey again.

Not a bad result I reckon and it was pretty quick to do too, only taking about three hours from start to finish, including building the rest of the set at the same time. The only change I made from my first piece to my second was swapping the drybrush colour from Mechicum Standard Grey to Dawnstone: 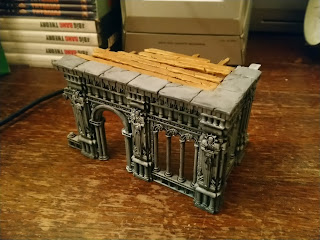 I think that simple swap just makes the whole thing 'pop' a little more, whilst keeping the dark and dingy feel I was after.

I want to go back later to add some more browns and blacks to the deepest crevasses to get some real filth in there, but I think it looks good enough for now.

The wood was just several layers of Seraphim Sepia over Corax White. It's a ridiculously simple method, even if building up the layers takes a little while. Definitely one I need to remember in future projects.

So that's mostly what I've been working away at. Nothing too massive, but now that things have quietened down elsewhere in my life, it'll hopefully mean that I can find the time to get some projects finished.

I've currently got the next couple of terrain pieces, some Corsairs, plus a few other characters on my painting desk, so I should be able to get those done pretty soon. Hopefully you can expect slightly more regular updates coming up. Hopefully.
Posted by Khorneguy at 21:38 No comments: