I've had a really productive few days. With a lack of anything else to do right now, I've really been cranking through projects at an excellent pace. Yes, that's right. I'm actually making a dent in my backlog! Wonders will never cease.
First of all, following on from last post, I painted up Shelob: 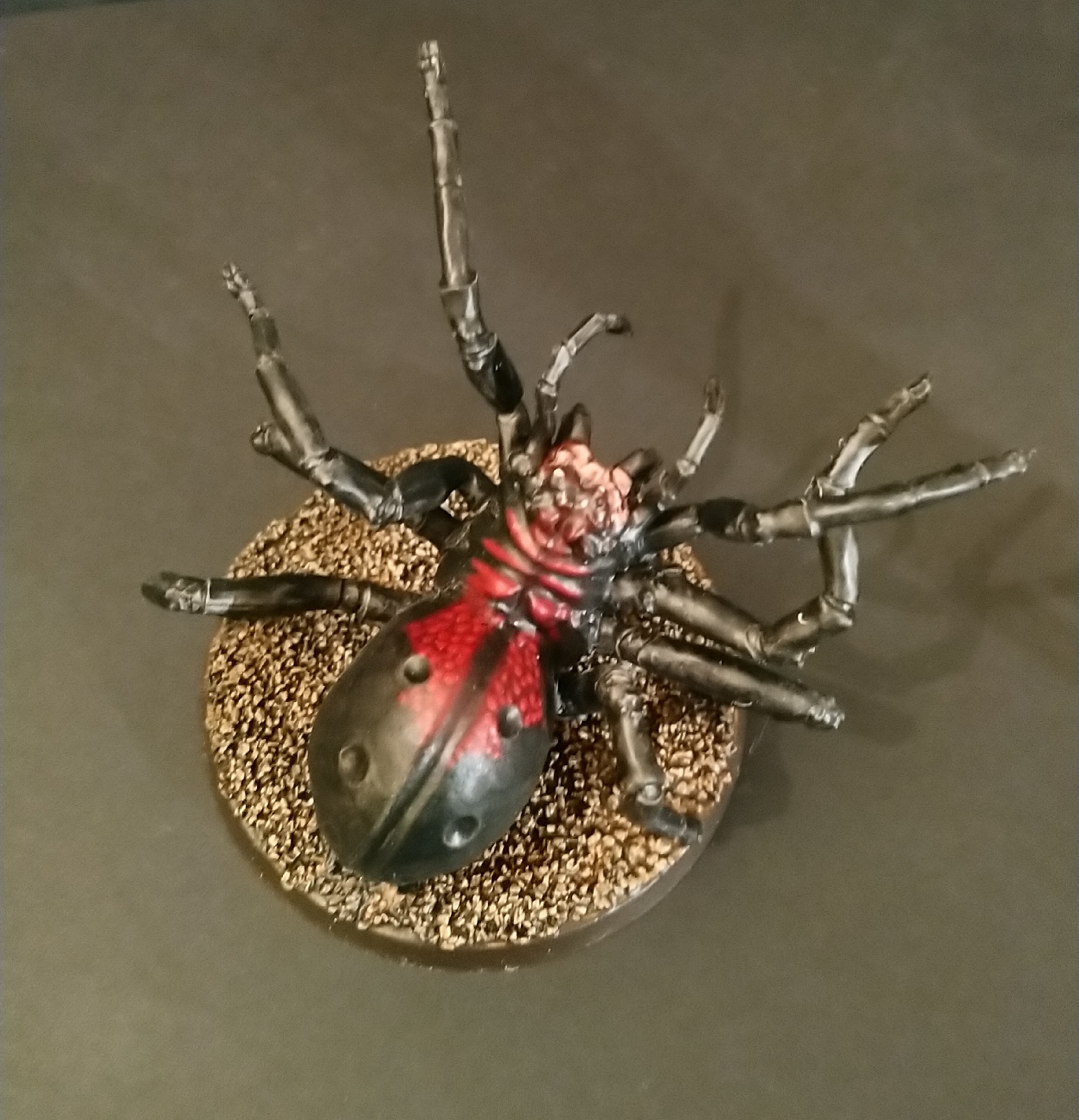 She was a lot easier to paint up than it was to build her. Getting a decent angle to for a photograph was a pain though, due to her pose. This was the best I could manage, sorry. 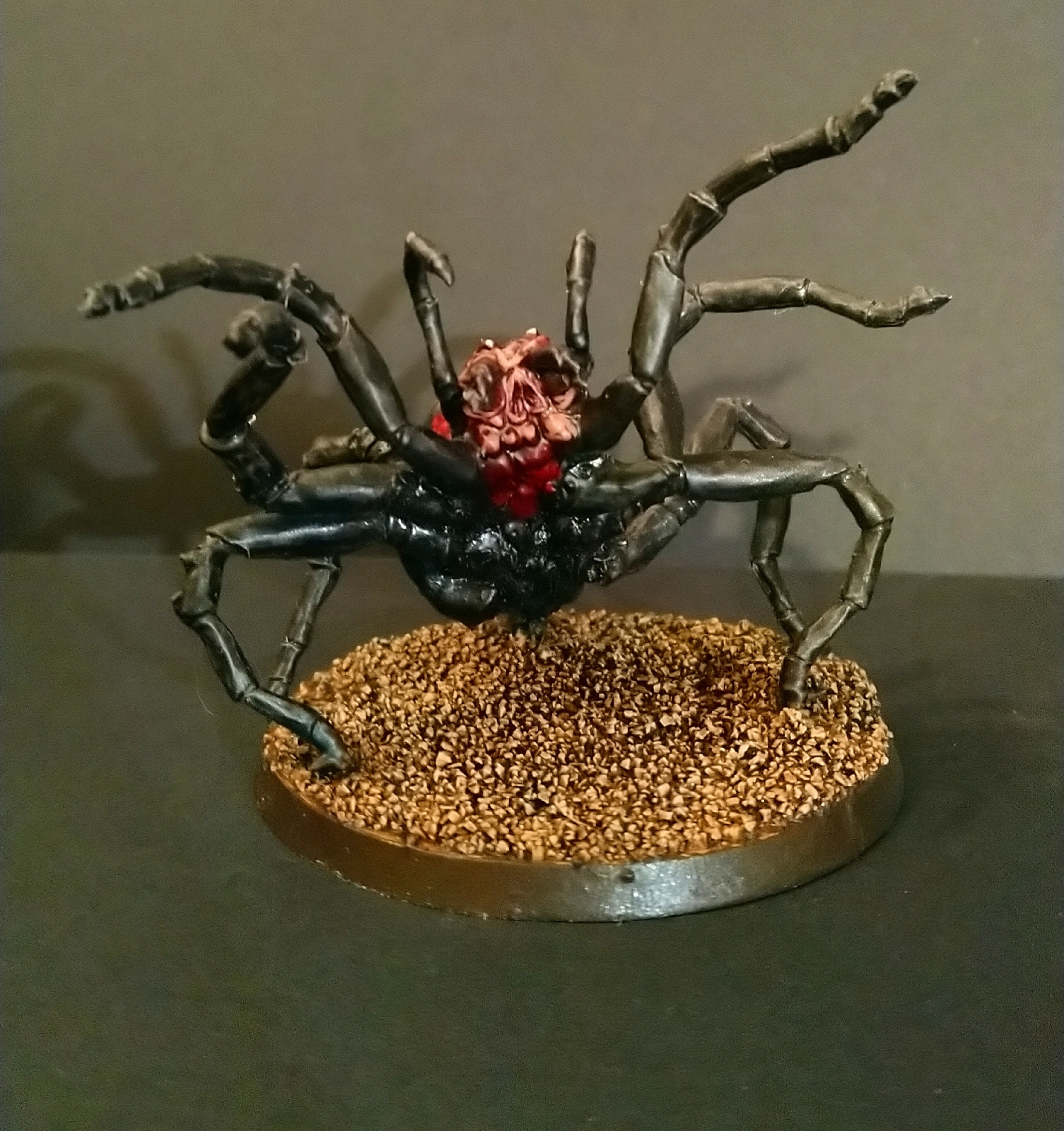 Because I was so worried about how fragile the model was, I focused more on doing a relatively simple paint job, then varnishing the hell out of her, rather than attempting anything too fancy. If you look closely at the first photo though, you'll see I did manage to freehand some patterned markings down her back, just to add some interest.
I'm pretty happy with how she turned out and I'm looking forward to the world being a little less mad so I can get her on the table, especially as she got a big boost from the new Cirith Ungol Legendary Legion!
Alongside Shelob, I also managed to finish up Gaffer Gamgee for my Hobbits, along with his flower tokens: 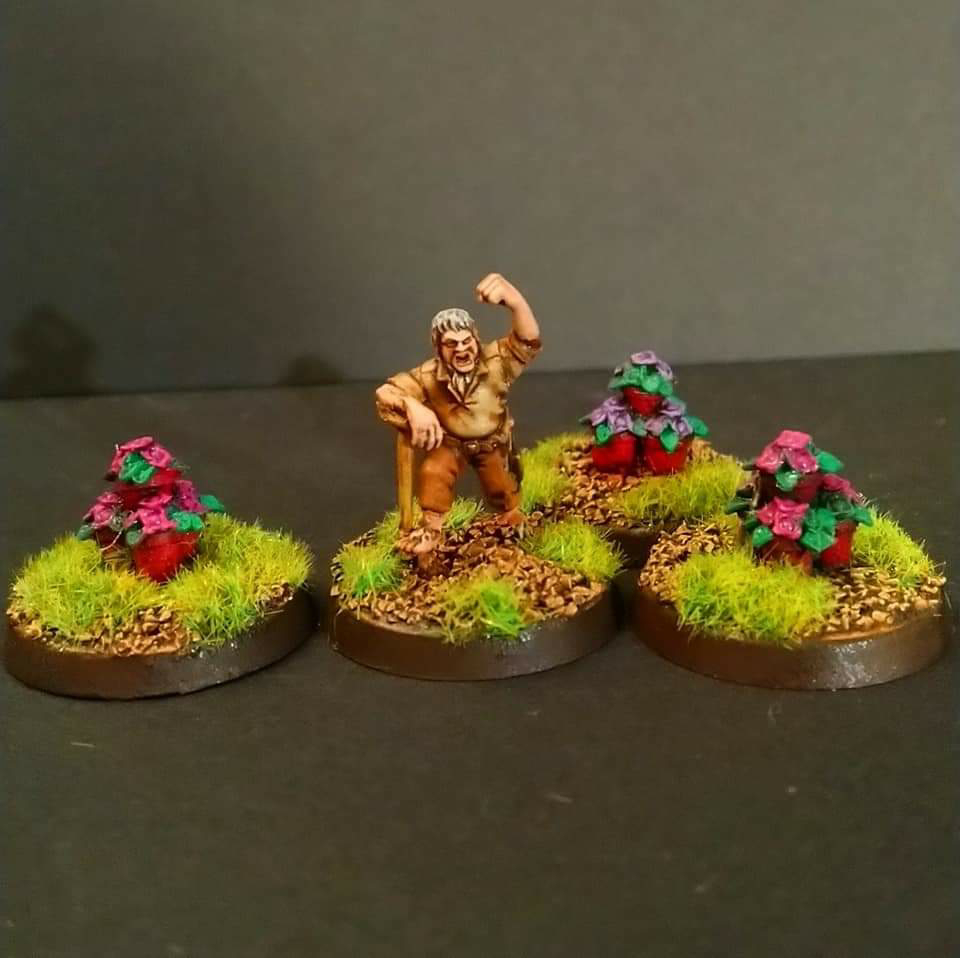 He was less fun to work on than I was expecting. I'm not sure what it was, but he was a slog to get through. Perhaps because of the relative lack of detail on him compared to the other FW Shire characters. It's a shame really, as I was saving him till last out of my initial purchase as a treat, but he didn't live up to expectations.
Still, I'm happy with him and he's another character for my army done. Only 50 more Hobbits to go!
Finally this week I finished up my second Mounted Aragorn: 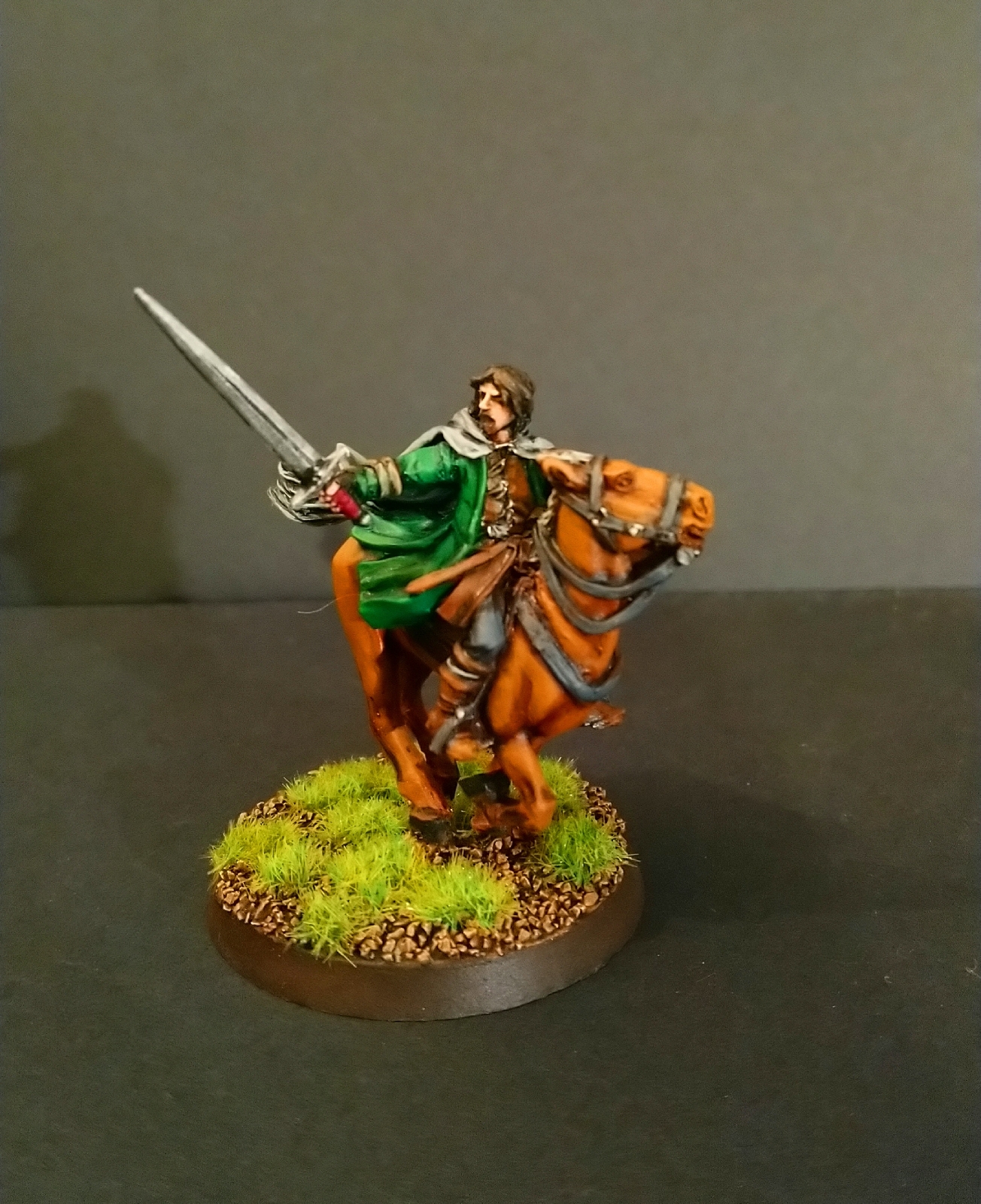 I accidentally snapped the leg of the one I painted about a year ago. Being a wholly metal model and the break being at the ankle, I figured it was easier to buy and paint a new one, rather than mess about trying to pin such a thin area!
Tbh I think on the whole he turned out than the original. Obviously I've gotten better at painting than I was back then, but I think a few subtle changes in colour choices made all the difference too. It all seems to tie together much better.
The only thing I'm not entirely happy with is his cloak. 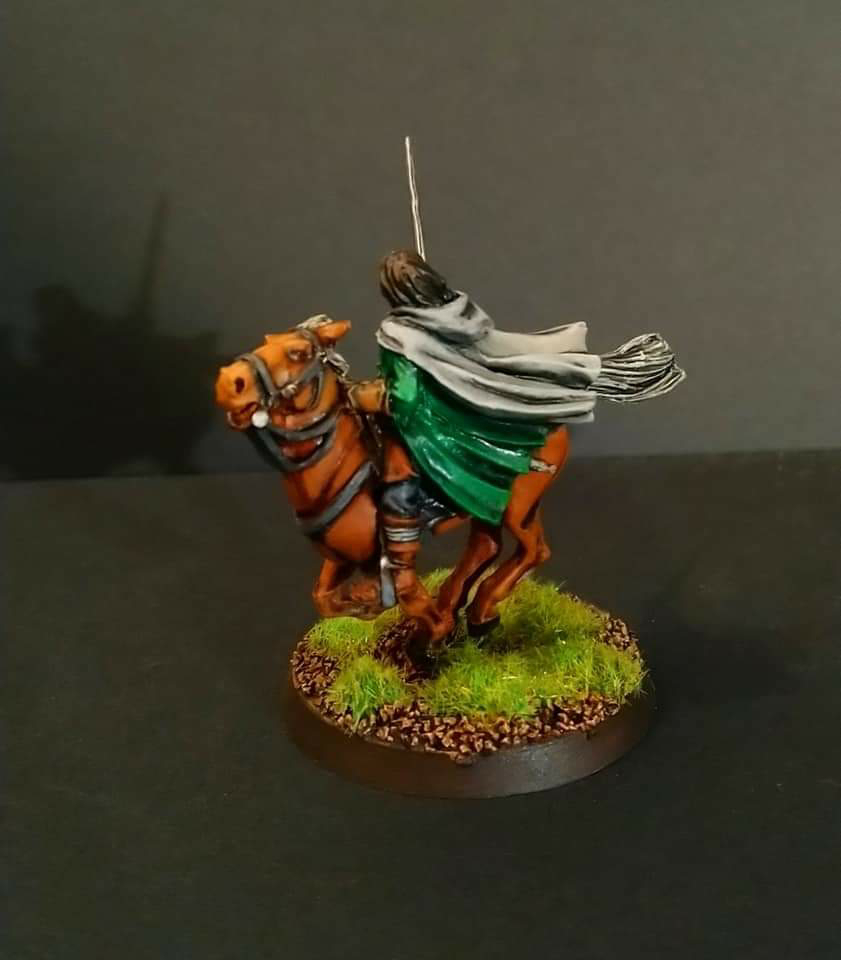 It didn't come out as smoothly as I'd hope. I can't have everything though and it looks decent enough.
He marks the start of a repaint project I want to do for my Rangers/Grey Company force, so I'll be working on that alongside the rest of my backlog. I'm really just drifting where inspiration takes me atm though, so anything could happen. I'm just happy to be getting stuff finished.
I'll post more soon, but until then, stay safe and happy hobbying!
Posted by Khorneguy at 10:36 No comments:

With the UK being back in Lockdown right now, you'd think I'd have plenty of time to get some projects finished. You'd be wrong unfortunately. Somehow I'm busier than ever. I have managed to find a little time to plug away at my backlog though, mostly Middle Earth stuff.
My Hobbits are coming along nicely. I've only got a few bits to finish up and I'll have the entirety of my initial purchase painted up. I figured the occasion called for a nice group shot: 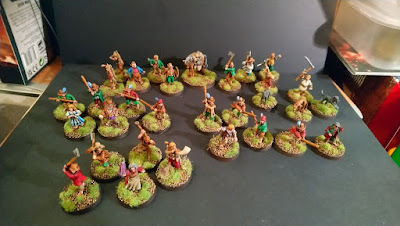 Quite a sizable force is starting to come together, even if it's barely a third of my final army plan! I'm really taking my time though to make sure each one is the best it can be. That might sound like insanity when selling with a horde army like this, but the models are so nice I want to do them justice.
Of course finishing this batch meant that it was time to order the next one. 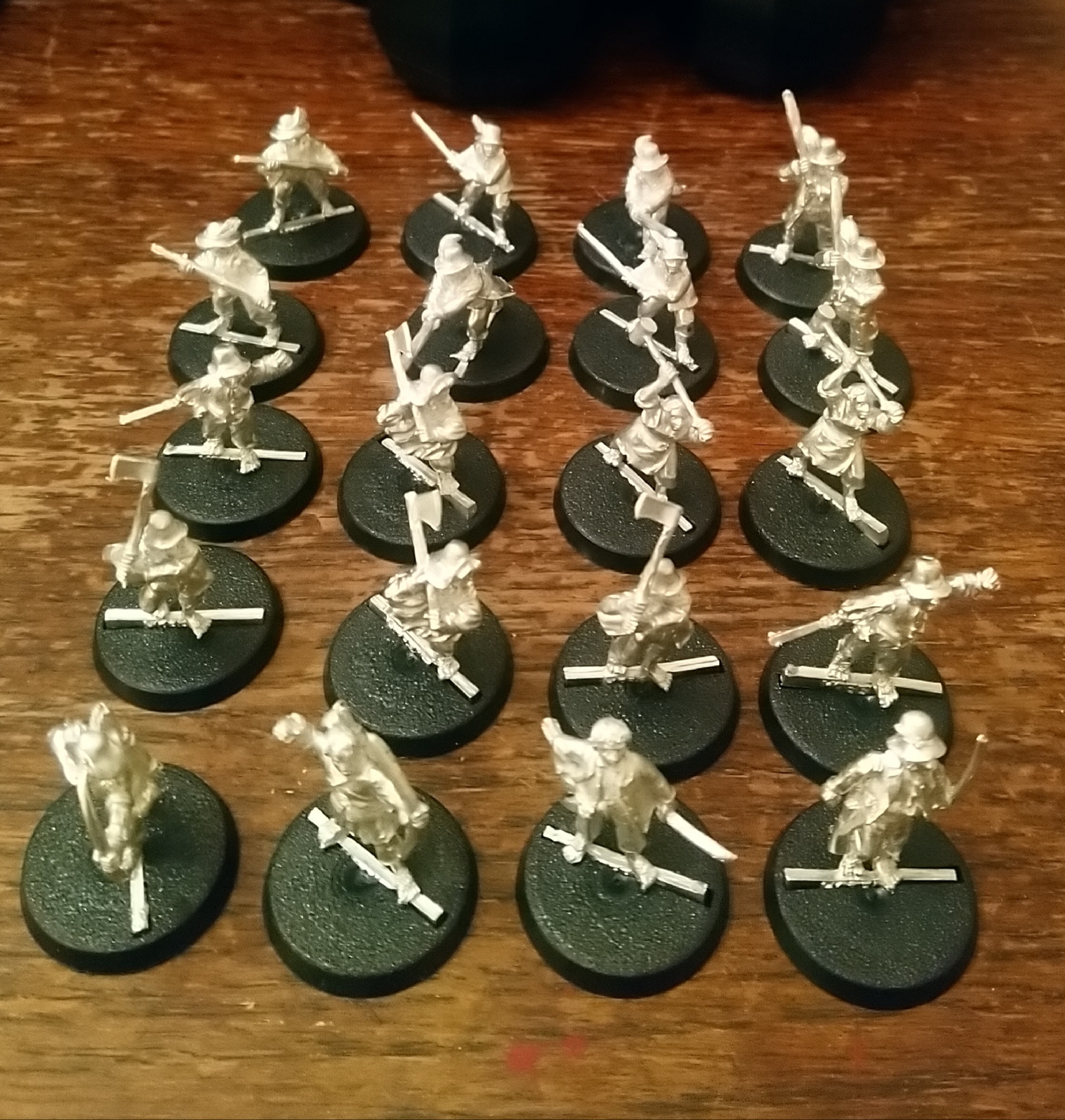 I honestly think I'm going to start seeing Hobbits in my dreams before this is done!
I want to take a little break before I start on the second batch though, so I turned my attention to other bits and pieces which I had laying around.
I figured I'd work on the Shelob model I've had for ages. A quick, relaxing build and a refreshing change of pace from Hobbits. Perfect, right? Wrong. After four hours of swearing, snapped limbs and endless bending and repositioning, I finally managed to wrangle the bloody thing into something resembling a model: 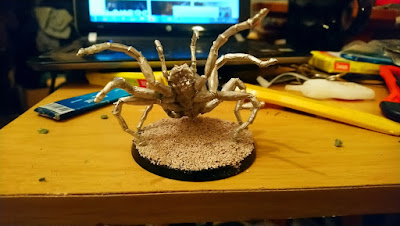 If anything would have benefited from transitioning to Finecast, it would have been this. It was a complete nightmare! At least it's built now and (should) be relatively simple to paint up. I'll let you know how it goes. I'm in a productive mood right now, so expect a flurry of posts over the next few weeks.

Until next time, stay safe and happy hobbying!
Posted by Khorneguy at 08:42 2 comments: