I've managed to get quite a bit painted recently, but unfortunately I havn't had much time to get many photos of what I've been working on, due to uni commitments. I'll try and remedy this in the next few weeks if I can find some free time.

For now though, I'm happy to announce I've actually made some serious headway with my Pre-Heresy Thousand Sons after three long years of planning and experimenting with them! The main thing which has been holding back progress on them has been trying to find a good recipe for their red armour. Every attempt I've made on them in the past just hasn't looked right. Then a few weeks ago I picked up some Army Painter Dragon Red basecoat spray and it all just seemed to click into place. I followed the basecoat with a Carroburg Crimson shade and a bit of weathering and I think the end result looks excellent. 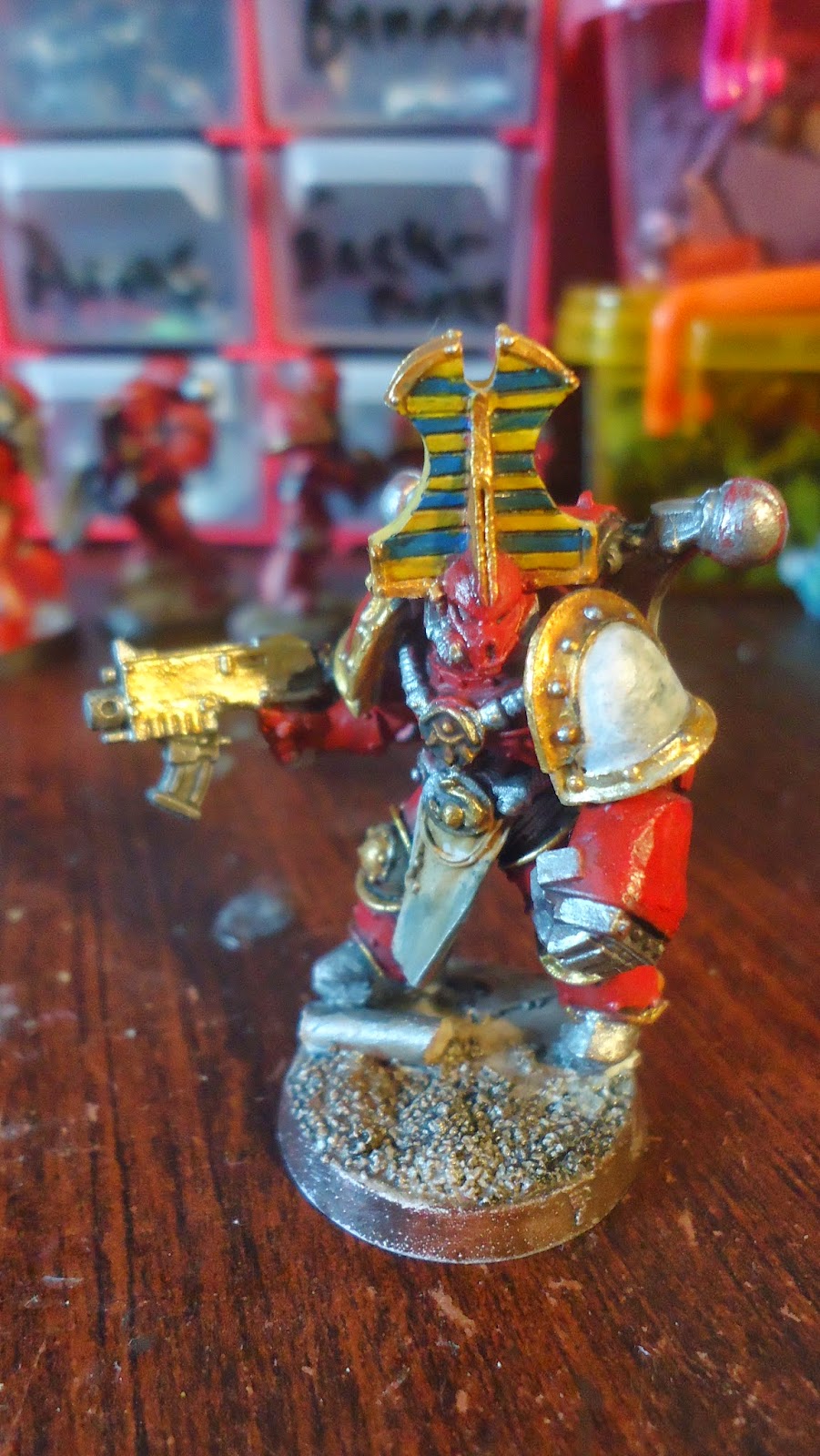 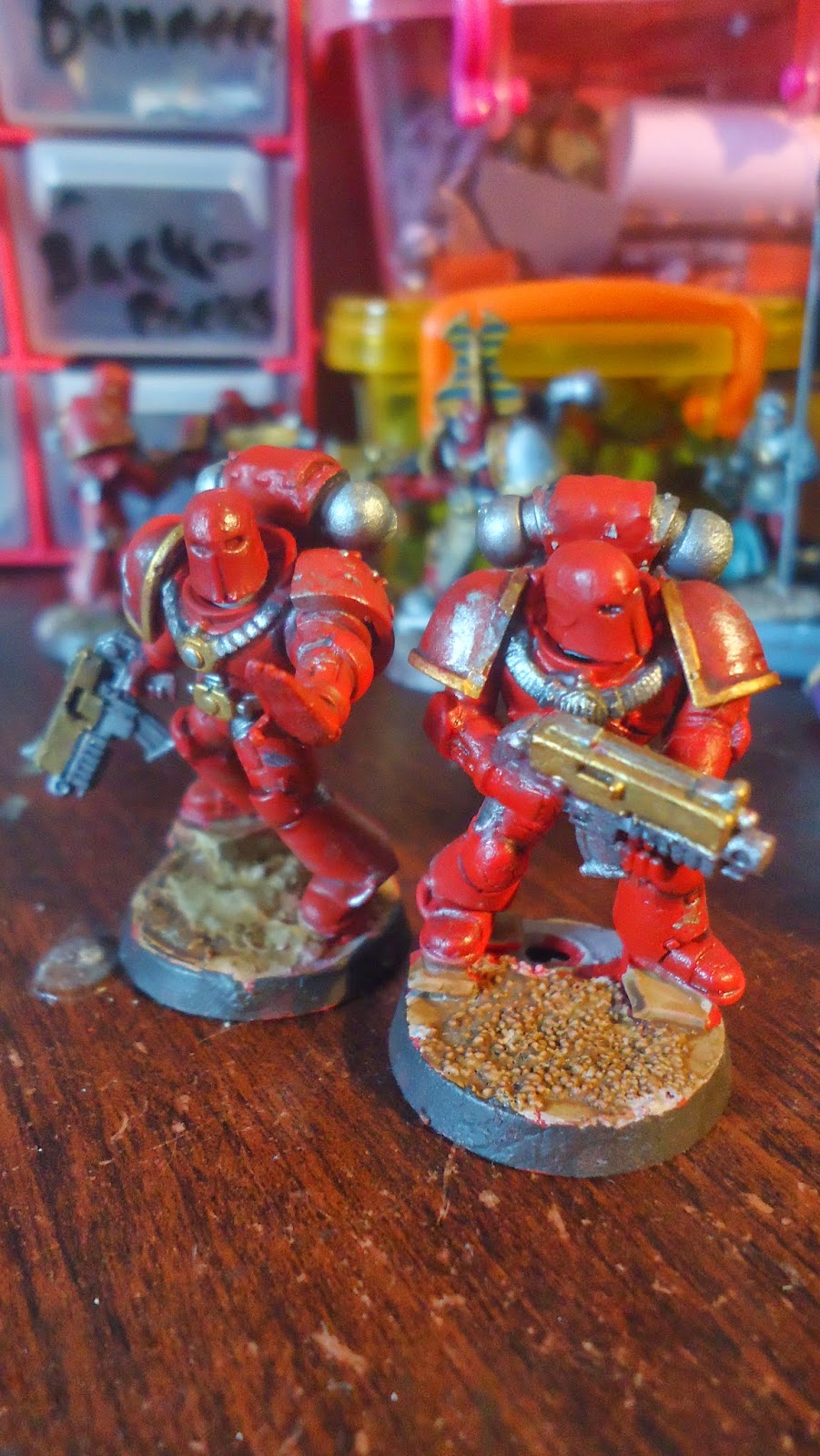 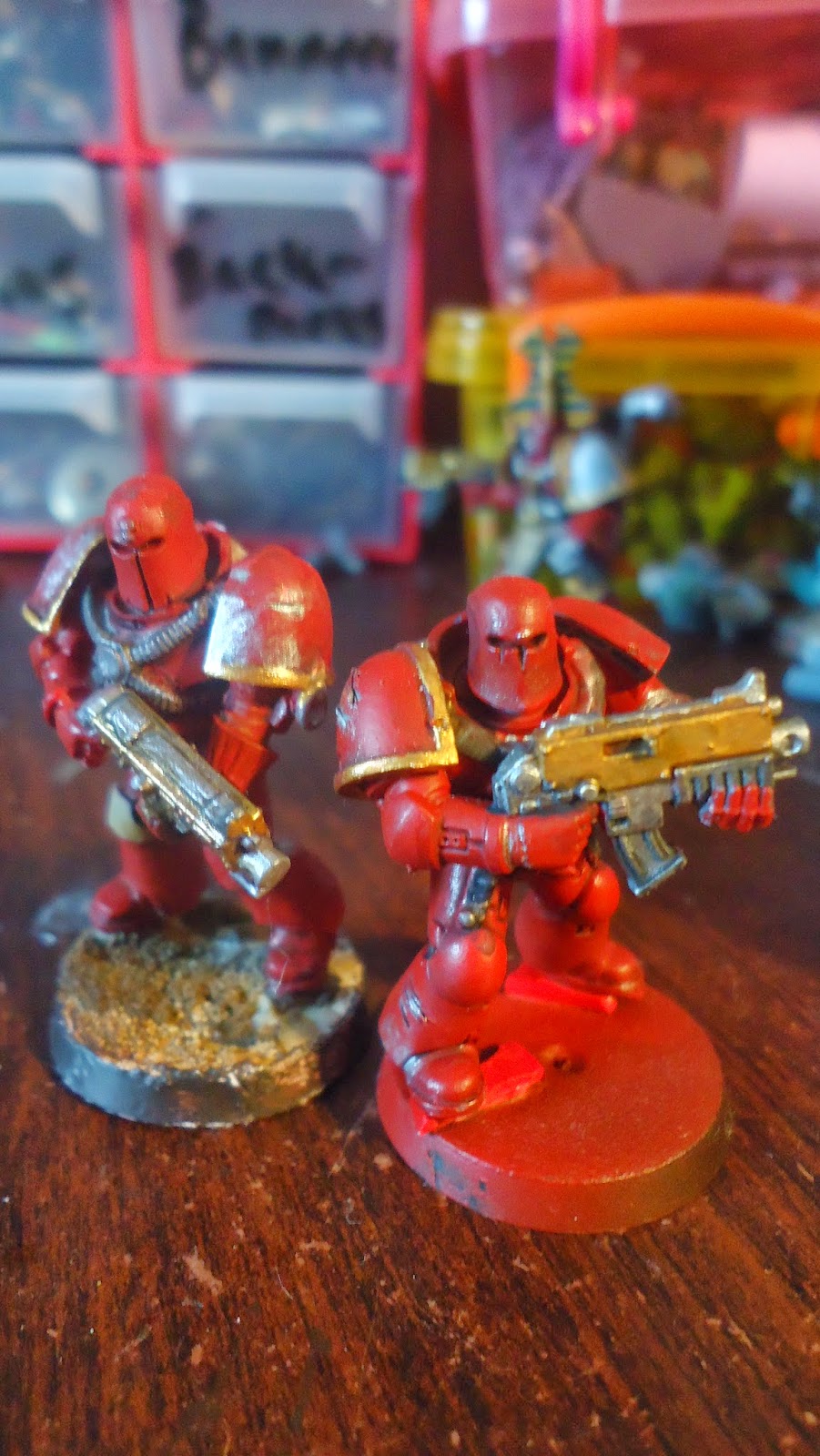 The marines were built using the SM Tactical squad kit (with a lot of conversion work) and some Warriors of Chaos helms. I'm still wondering whether or not to add helmet crests to them, as the Thousands Sons are shown in Collected Visions, or whether to save those for the veterans of my force. I'll leave them as they are for now though, at least until I have a full squad of them. The sergeant is a combination of the Thousand Sons and FW Iron Armour kits

They still need their bases finishing up and markings added, but I'm thinking about saving the latter for when the FW Prospero book arrives, so I can mark them correctly. For now though I'll just be happy to get a whole squad done to a battle-ready standard. At least five more members will be added when my next bitz order arrives, then I can turn my attention to some characters for them and the Alpha Legion I've been inspired to build by the release of Extermination.

Posted by Khorneguy at 17:56 No comments:

Sons of Horus vs Necrons

I managed to get a game in tonight for the first time in a few weeks, pitching my Sons of Horus against a Necron army down my local club. It ended in a victorious slaughter for the Necrons, with the XVIth Legion being torn apart by gauss fire, or else utterly failing to do anything against his Wraith unit, resulting in three of my units being tied up in combat and unable to support the rest of the force. This coupled with a few tactical errors on my part and my usual atrocious dice luck meant that I really struggled to do much all game.

On a plus note it did allow me a chance to field my Squats as allied Imperial Army before the new IG codex hits. Interestingly enough they did the most damage out of all my units, defeating a Scarab Swarm in combat after it had munched through my Javelin Speeder.

I also managed to get some pics of the game and, even more amazingly, I actually remembered to post them up - wonders will never cease. I only managed to get a few, but here they are: 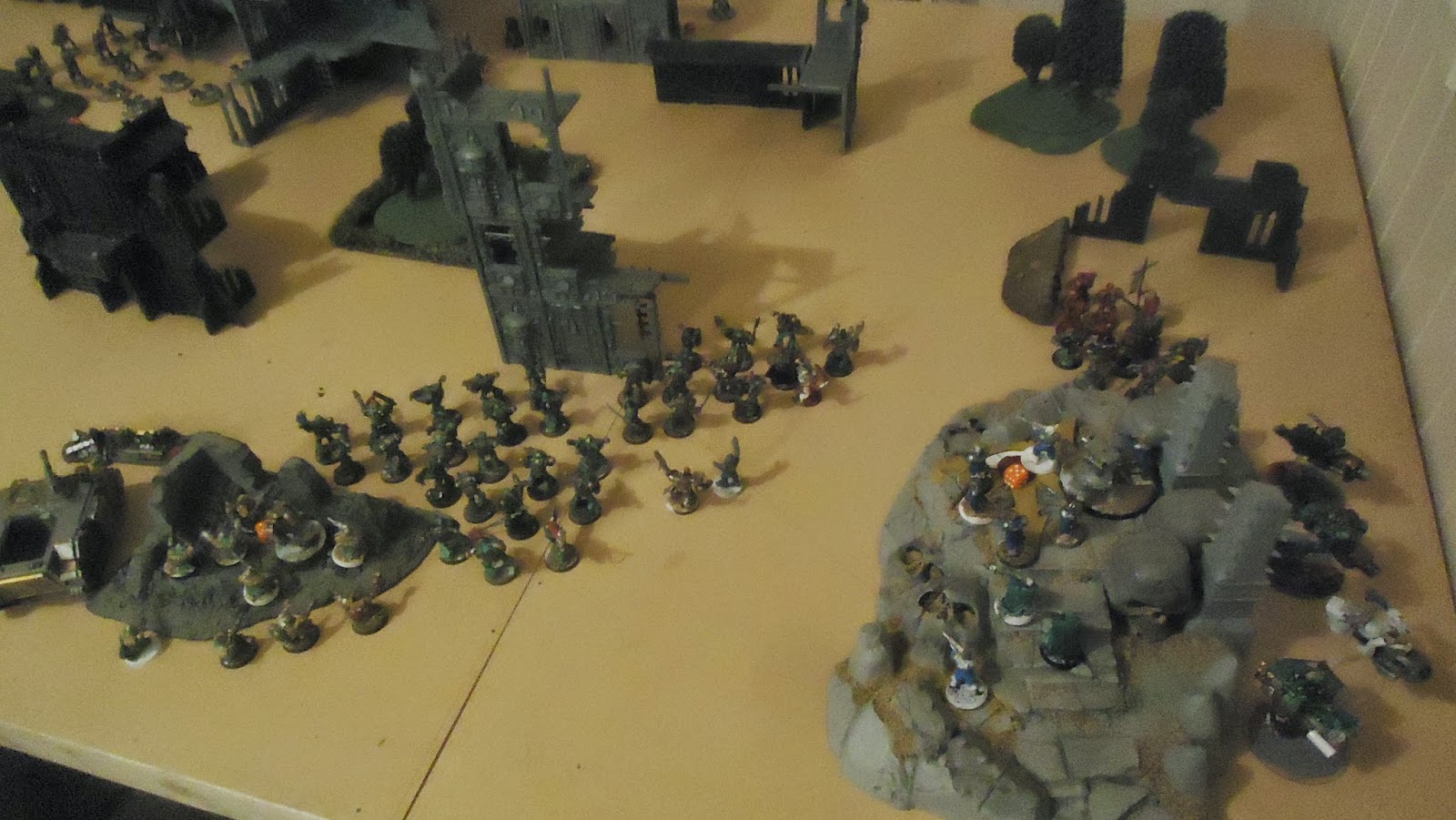 My XVIth Legion/ Squat Alliance post-deployment. I left the Army forces to look after the objectives, while the Astartes advanced. 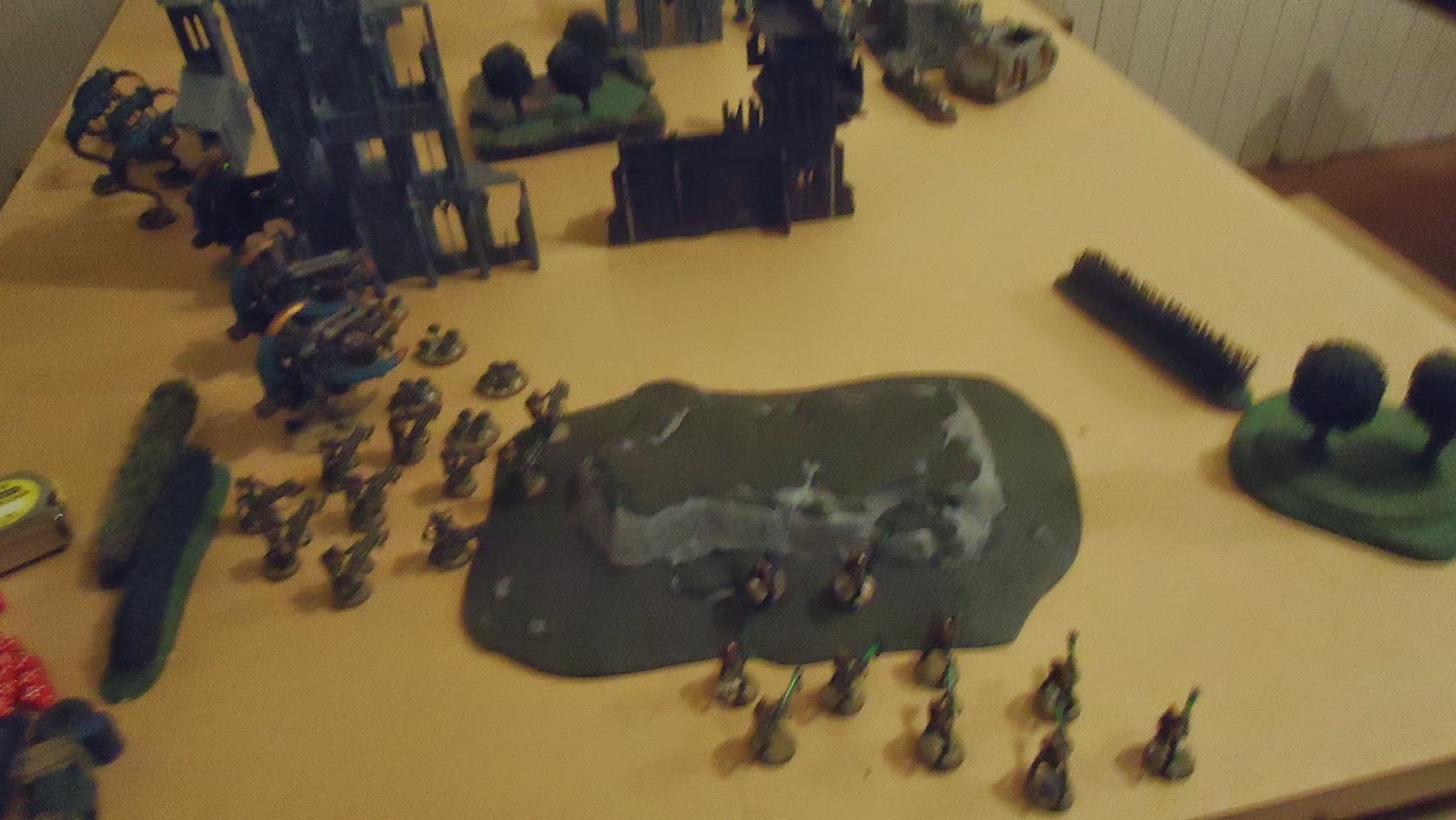 The Necron force: A few units of Warriors, a unit of Immortals and a whole lot of shooty vehicles. He also had a unit of Deathmarks coming in via Night Scythe along with a Cryptek carrying a nasty flamer thing which demolished my big Tactical Squad. 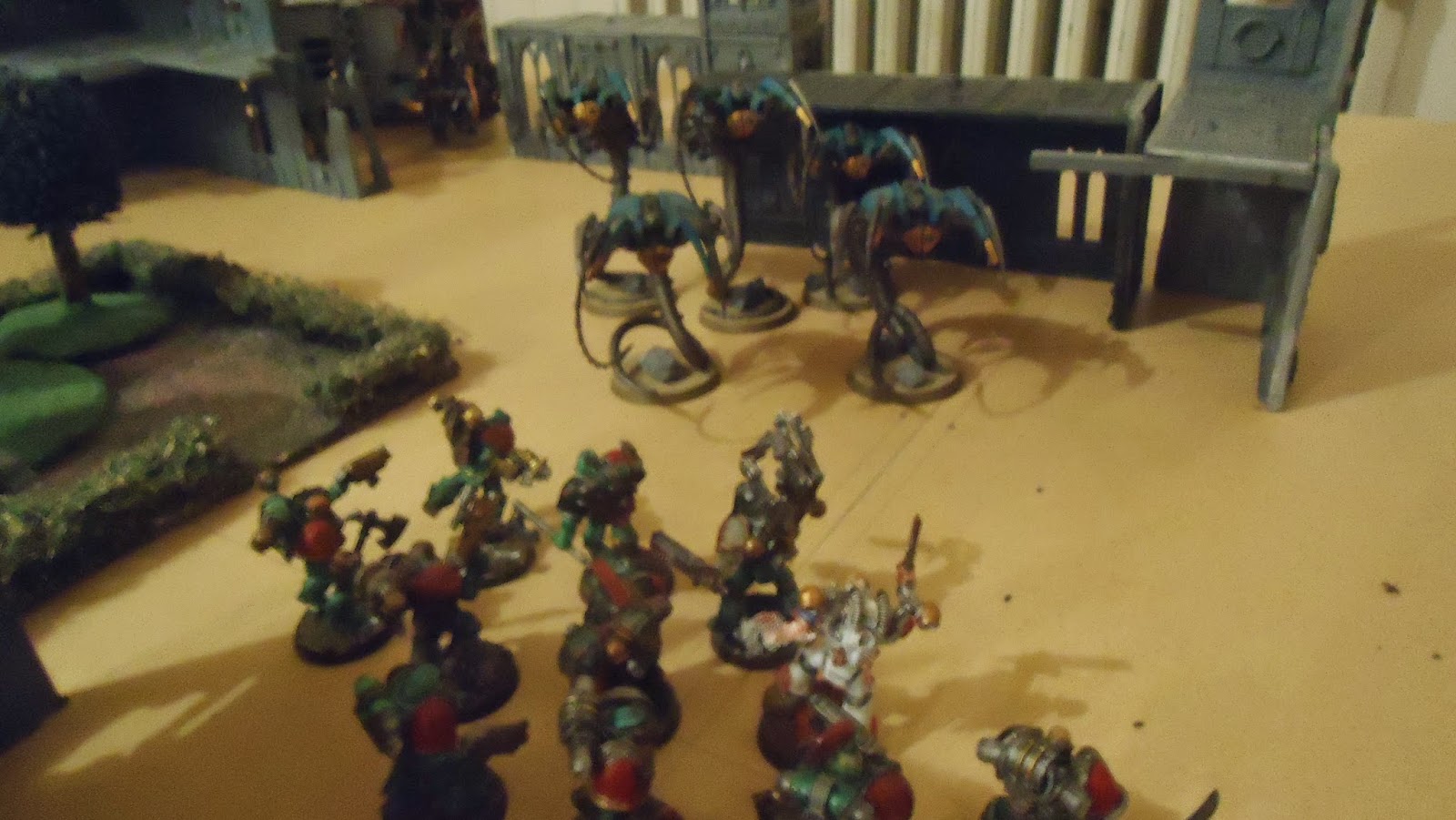 The Wraiths advancing on my Reaver Squad. Given the fact that they butchered their way through a CSM army last game, I thought I'd be fine... 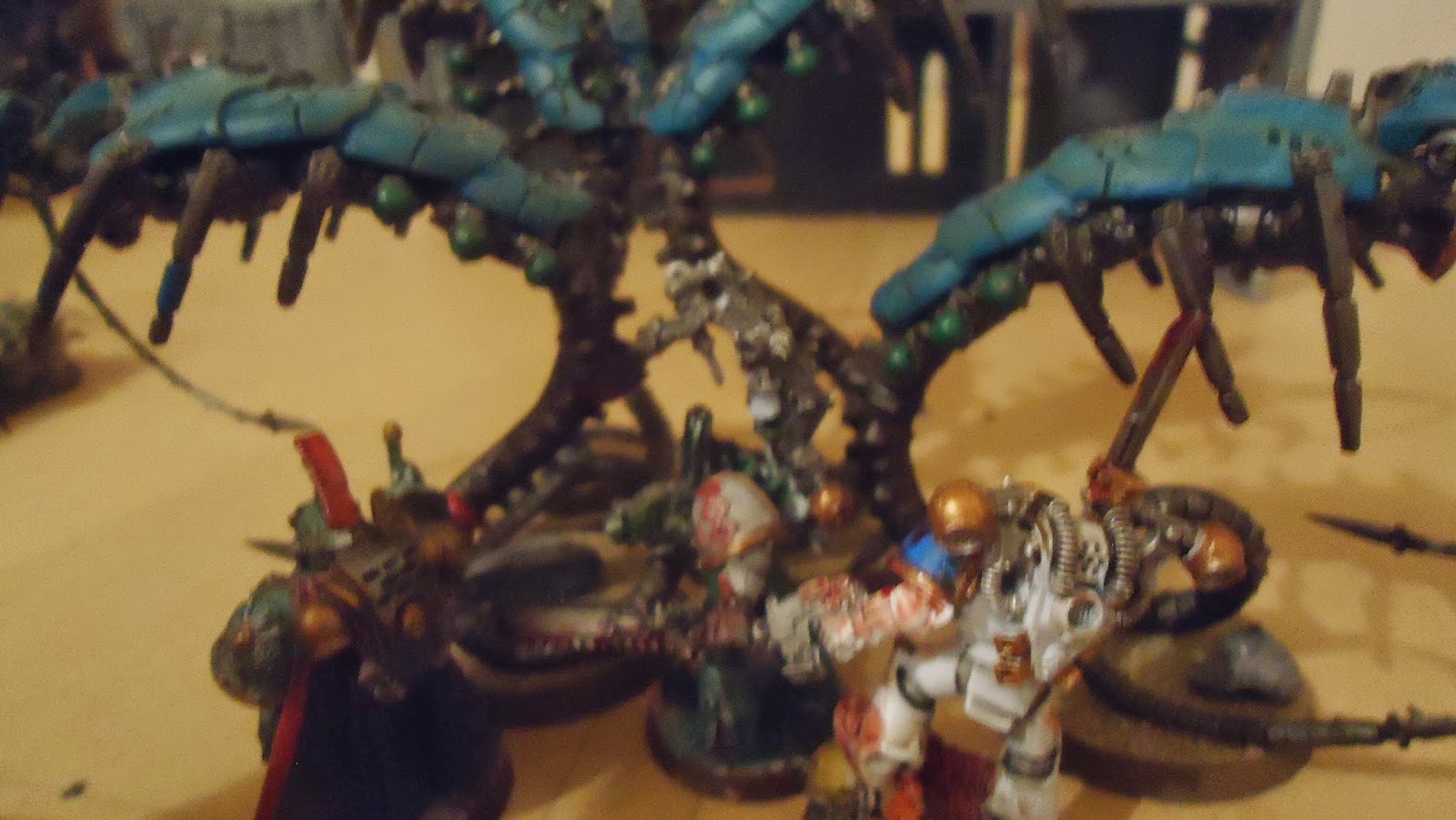 How wrong I was! This was the scene after a single round of combat. Only Morkaddon, the Apothecary and a single Reaver were left standing. Reinforcements soon arrived in the form of a Tactical Squad charging in, but they didn't managed to do much either. When the Techmarine with Rad Grenades failed his charge from 4 inches away, I knew the dice gods had abandoned me once more and my fate was sealed.

That's all I've got for now, but I'll make sure I take more when I go to have the rematch me and my opponent said we'd have at some point  By then I should have most of my force painted up- another awesome thing to come out of the battle is that it's sent me into a painting and fluff-writing frenzy, so expect to see a lot of stuff posted up on here in the next few weeks.
Posted by Khorneguy at 01:03 No comments: