I've been a bit quiet on here recently. Not because I've had nothing to show you, but more because I've been too busy to find time to update the blog! The last month has been a bit of a wild ride, trying to stop my painting points getting completely out of control. Not only are the new Chaos releases beautiful and tempting, but I've also picked up an entirely new game: 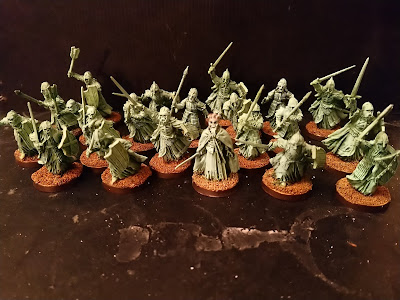 Yup, I've started Lord of the Rings. Being a massive Tolkien nerd, I've wanted to play it ever since it came out in the early 2000's, but noone in my circle of gaming friends played it, so I've never really had the chance. That changed a few months back when a group at my local gaming shop started a monthly meet up for it. It really didn't take much to suck me in. I had a test game of Rohan vs Uruk Hai and I was hooked. Two days later I went halves on the Pelannor Fields boxed set with someone and started trawling ebay for various metal characters.

Whilst I want Rohan to be my main force, I decided to start simple and paint the Army of the Dead from the starter box. They really didn't take long to get finished. I just did a few green washes, followed by a Hellion Green drybrush. Whilst they won't be winning any painting awards, I think they turned out looking great and it give me a solid 400 points to start playing with.

My next step will be painting the Aragorn, Gimli and Legolas models which I nabbed from Ebay so I can field the Return of the King Legendary Legion and take me to 600 or 700 points. Not bad considering I only started the game at the end of February!

Whilst learning the game, I've been a little surprised at how popular and robust the fan community for it still is. The Middle Earth SBG fanbase have really kept themselves to themselves over the years, especially compared to the 40k and AoS fandom, but it's still a massive community. The level of dedication and hobby love out there for the game really is amazing and that makes me even more excited to finally be able to join in!

On top of all this, I've also been working my way through the Shadowspear box for 40k, but I'll show you that next post. I'm hoping to try to up my frequency of posting too, so that shouldn't be too long in coming.
Posted by Khorneguy at 02:25 2 comments: