I seem to be doing hobby in fits and starts atm. After a week and a half of not touching a brush at all, I finished work early the other night, sat down to paint and somehow cranked out about 8 hours of hobby time!
Can't really argue with tbh. I've just got to roll with whatever motivation my brain choses to give me at any one time.
In this case it's yet more Elves: 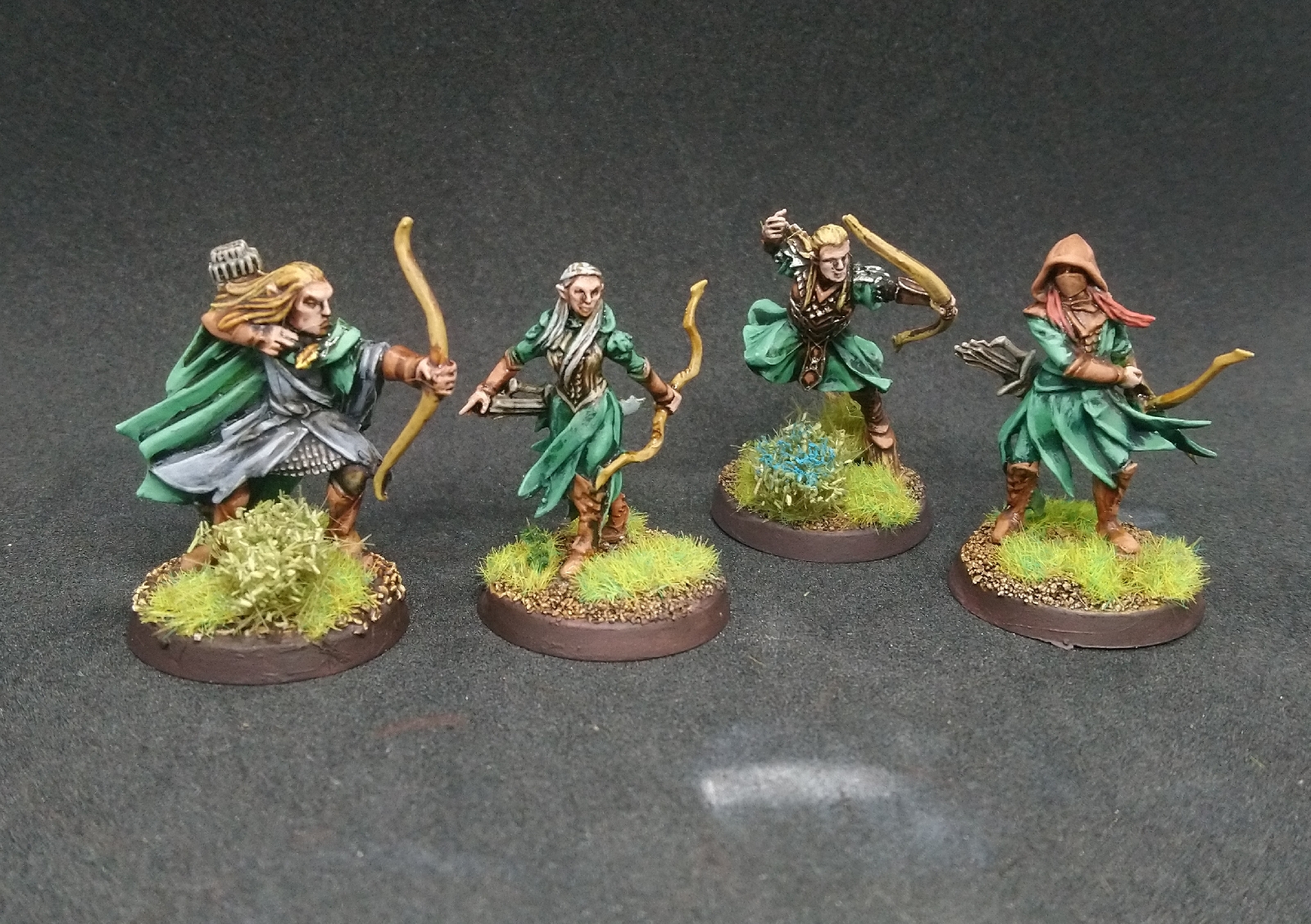 It's been really nice just working on a single project like this. Everything seems to go so much quicker as I develop a sort of muscle memory for each step. It's almost a shame that these are the last of the Ranger section of the army, but the same methods will translate over well to the armoured Elves, so it's all good.
Surprisingly, that Legolas sculpt has grown on me a little as I painted it. I originally wasn't a fan of it at all, but I picked him up as part of a Made to Order bundle with Tauriel, but he just looked too small and bland for my liking.
Now though, I wouldn't say it's my favourite Leggy sculpt by a long shot, but I gained more appreciation for it as I painted him. I'll probably still use the metal versions of him as my leader, but this guy might end up seeing some use if I need an extra Ranger or Sentinel to throw into a list.
That's it for today though. I'm going to try and ride this renewed surge if hobby mojo fir a few days, but your guess is as good as mine as to whether it results in anything.
Until next time, happy hobbying!
Posted by Khorneguy at 02:24 1 comment:

I've had a pretty quiet hobby week. As predicted, me being back at work has somewhat sapped my energy for working on anything hobby related. I'll try and rectify that this week though, as I'll have a few more days to myself.
Luckily you don't have to miss out on a progress post though, as I actually forgot to put something up which I painted last week: 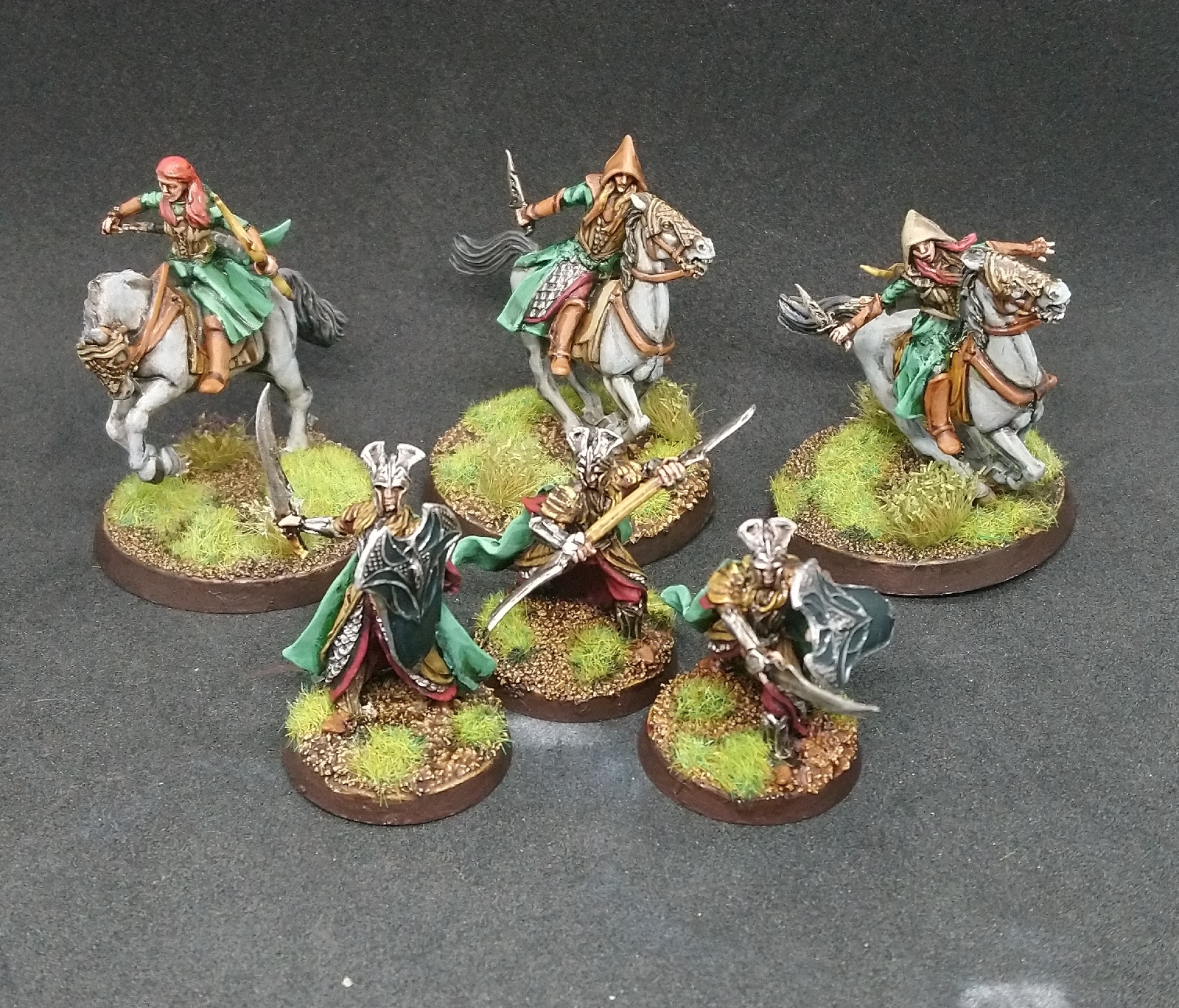 It's just continuing to spruce up my existing Mirkwood Elves, but progress is progress!
Those finecast armoured Elves are an absolute pain to paint, especially the shields, but at least they're done now. I've got another 9 of them unpainted to do after these so that should be 'fun'. It is nice to be making progress on them though. Once all the infantry is done, I'll move on to my various Thranduil sculpts which need doing. My vague goal is to have the army finished in the first quarter of this year. I'll probably have to see how I go on that though, as I keep getting distracted by my Orks!
Anyway that's it for today. Just a quick one, but hopefully something will click back into place and I'll have more to share with you soon.
Happy Hobbying!
Posted by Khorneguy at 05:14 3 comments:

My goal to stay focused on existing projects going in 2022 seems to be paying off. I managed to get a Deff Dread done for my Orks in the last couple of days: 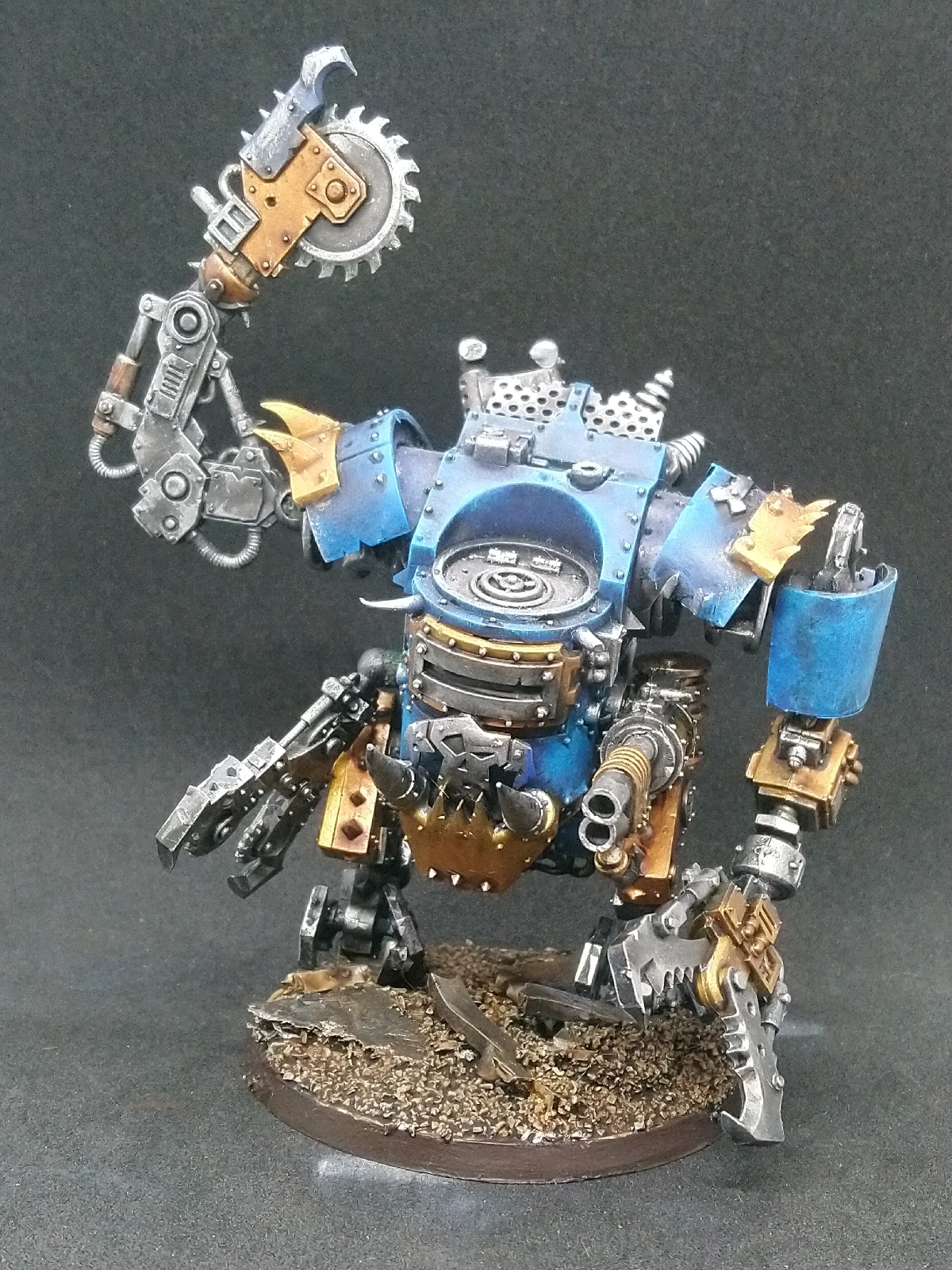 Considering that it's been sat on my to do pile since the summer with just the basecoats down, it's rather nice to see it in all it's finished glory!
It's also been fully magnetised so weapons can be swapped freely, although I'm rather favouring the triple Klaw/Skorcha combo atm. 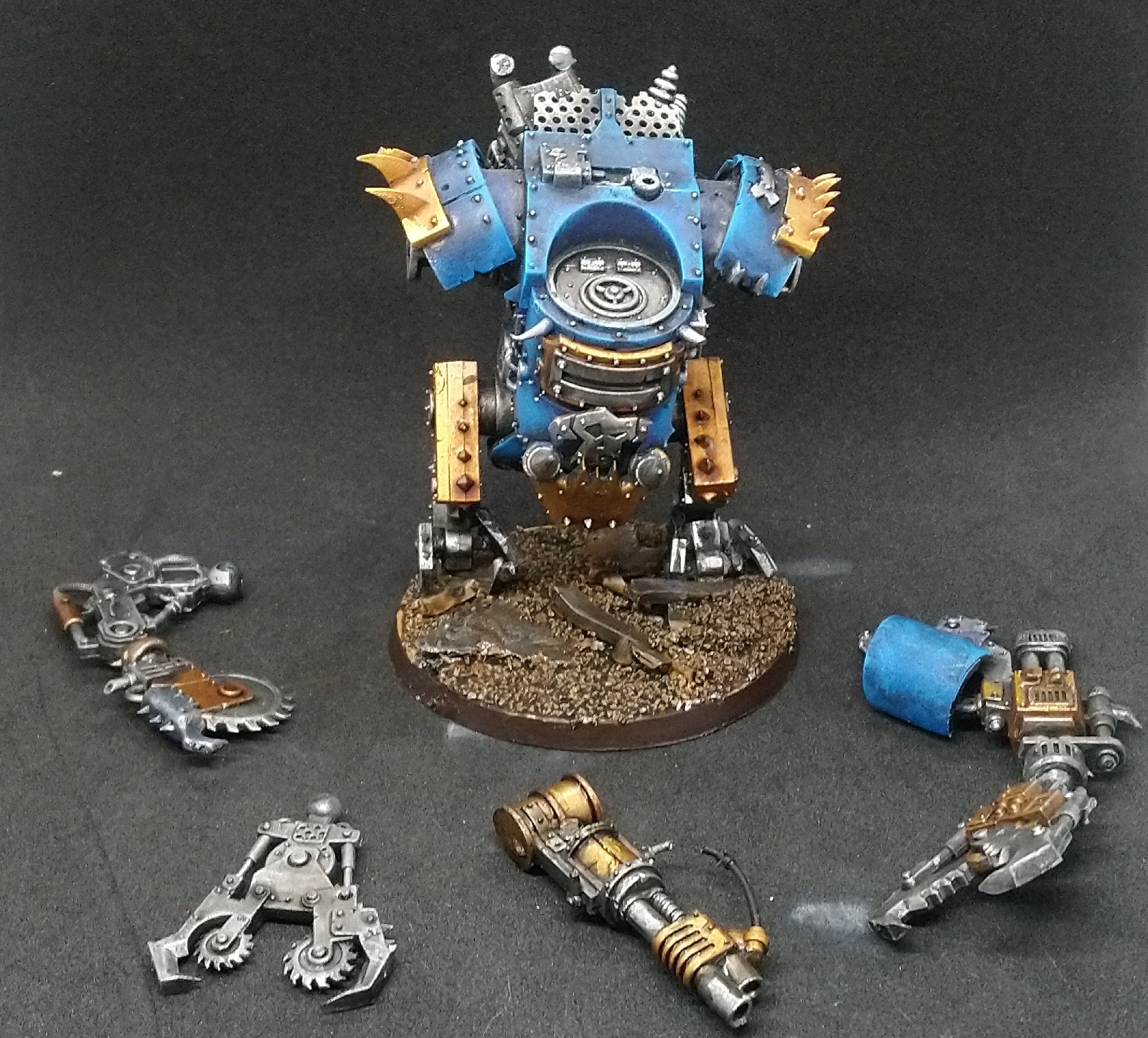 The ultimate goal is to magnetise up all the options and have then be interchangable between all my Dreads and Killer Kans. I'm too lazy to paint them all up in one go though, so I figure they can wait until the Kans are ready to be done!
I even managed to get some games in over my week off, as well as attending a local Middle Earth event. I'd love to say that my new Dread has been pulling his weight, but he's developed a rather unfortunate habit of copping Melta shots to the face! 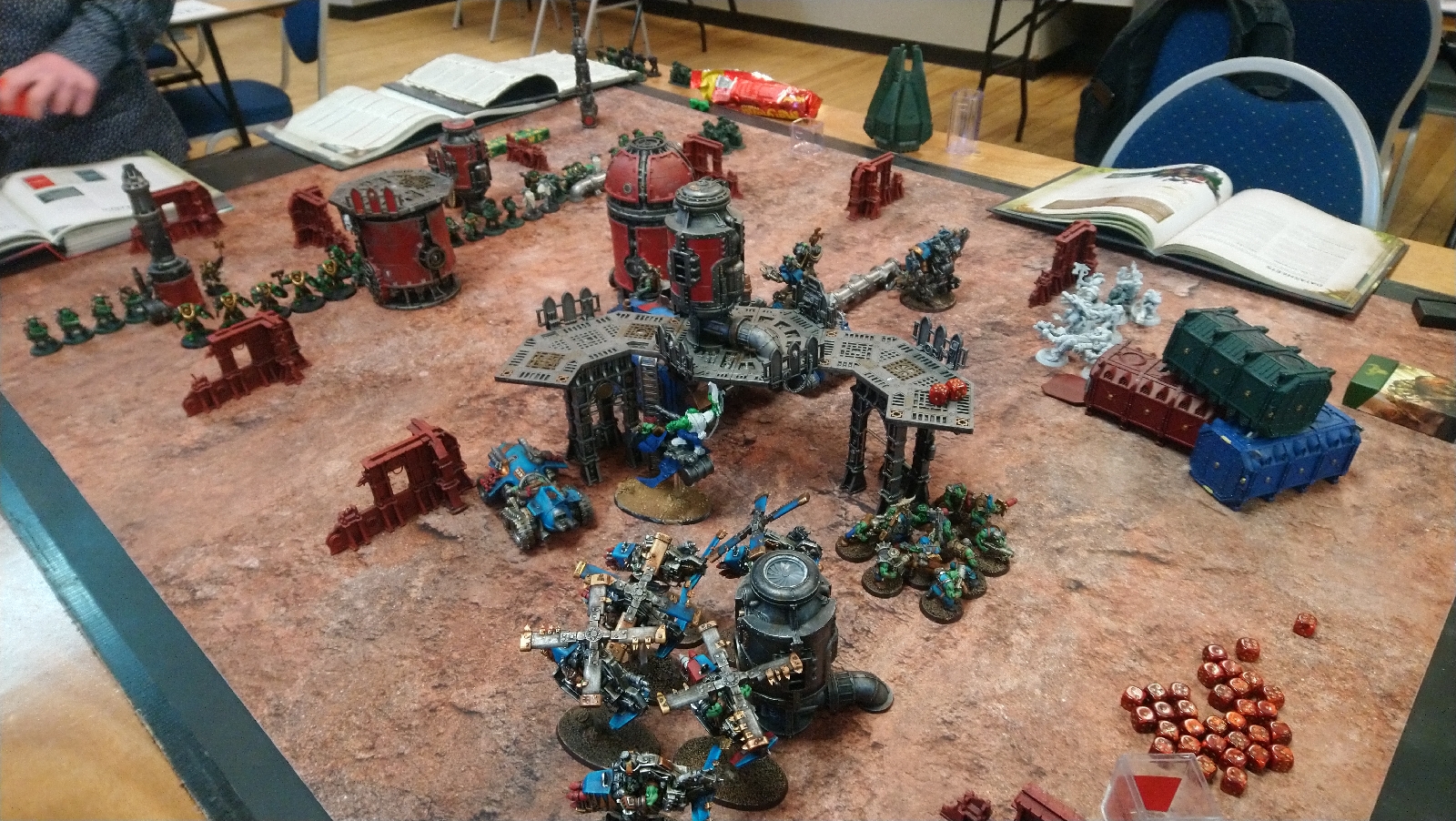 It's been pretty good to get out gaming though, now things are calming down a bit after Christmas. It's certainly helping to keep my motivation up too!
I'm back at work from tonight, but hopefully that won't put too much of a damper on my progress. We'll see though. Until next time, stay safe and happy hobbying!
Posted by Khorneguy at 08:14 1 comment:

After pledging to try to finish off my existing projects this year, I seem to have started the new year off on the right note: 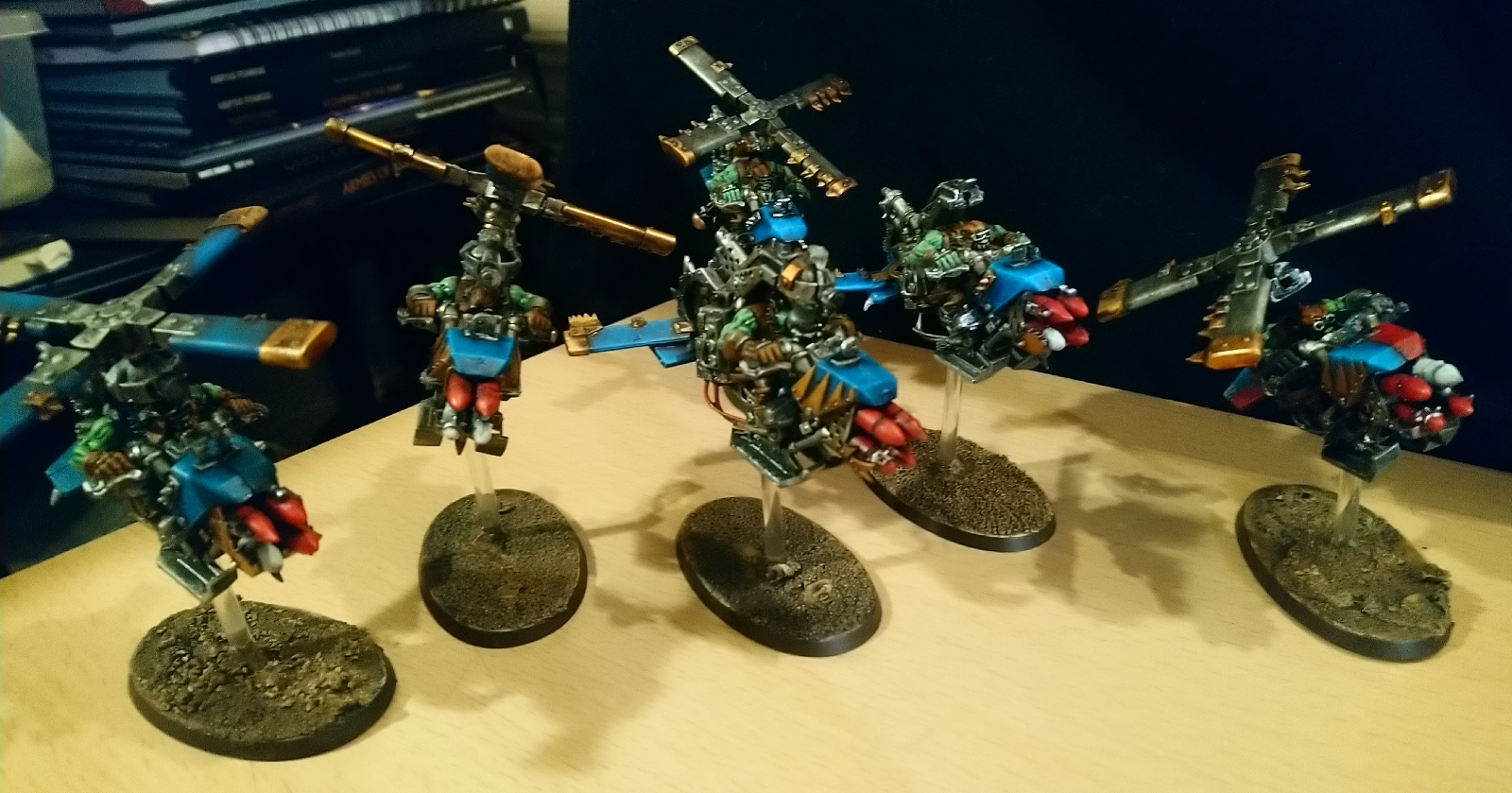 Granted these were started in 2021 but they're done now and that's what matters.
I've actually been plugging away at these on and off for a couple of months. Considering they were starter box minis from about 15 years ago, there's a hell of a lot of detail on them, far more than I ever anticipated. It feels so good to finally get them moved onto my finished pile.
They're mostly restored from my collection of old Ork models which I bought back in 5th Edition. Given the prices that they're going for on ebay atm, I'm really glad I had a stash! Anyone who got the old Black Reach Deffkoptas will also tell you what a pain they were to store without breaking the blades or flying stands. Luckily I've come up with a solution to both of those this time around thanks to the modern advent of 3d printing and magnets within the hobby: 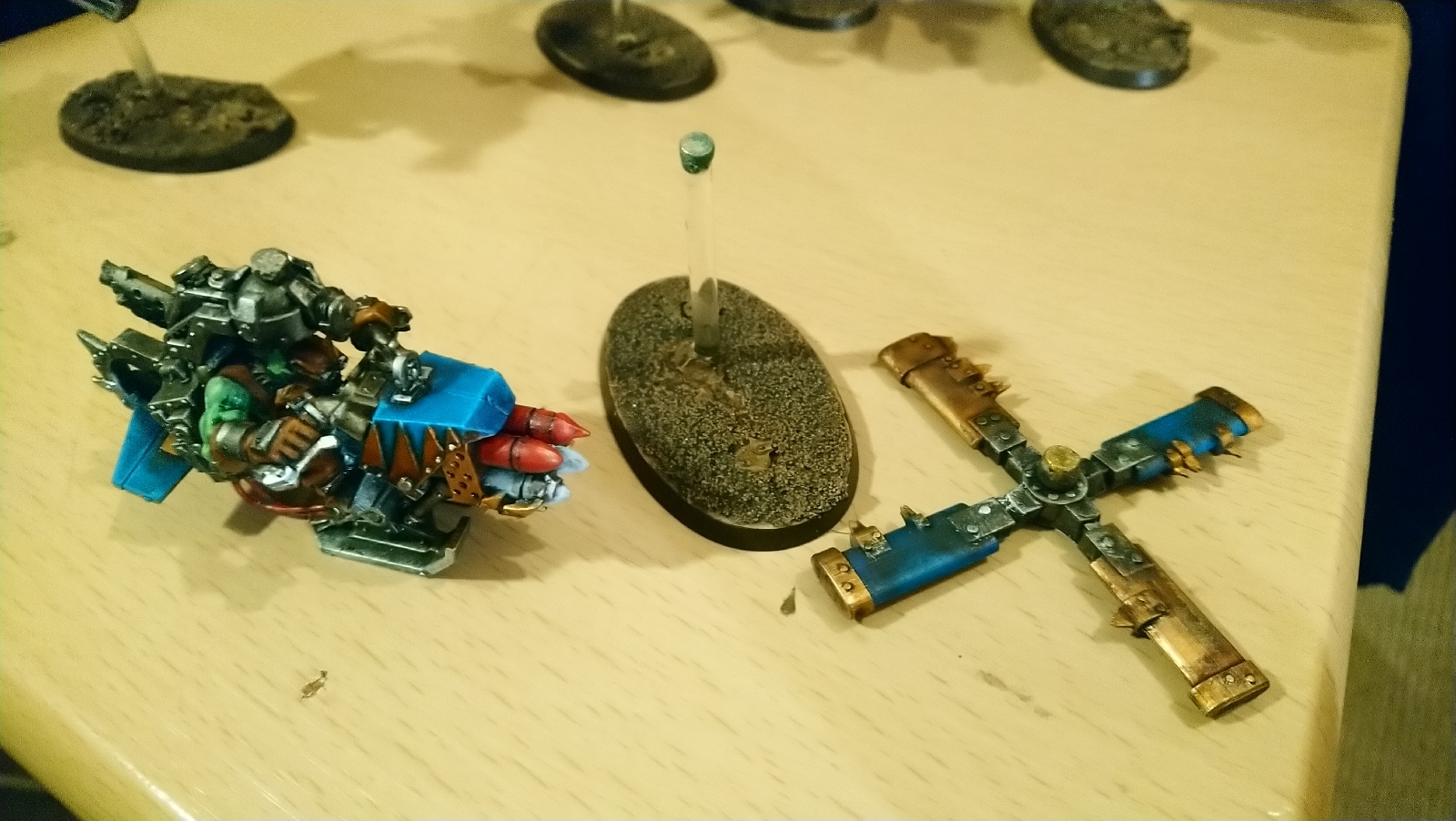 The blades were about twenty quid from Etsy and I had the magnets knocking around anyway. Apart from a few hiccups with balancing issues, I think it's a pretty elegant solution for the question of how to transport them to games without spending my entire life repairing them!
The only downside I see with these is that I eventually want 18 of them in my Speed Mob list, so I've got a lot more work looming in the future to duplicate these twice. Still, it's nice to have these done for now, especially as I've got a crusade game planned for Friday where they'll make their debut against an unsuspecting Salamanders player, so that should be fun!
That's it for today though. I'm hoping to get more done this week, but we'll see how it goes.
Posted by Khorneguy at 19:22 3 comments:

As 2021 draws to a close and we go hurtling into 2022 with frightening speed, its time for my usual look back at my hobby year and forward at the year ahead. It's always nice to do these kinds of posts as it gives me a chance to see how far I've come in the last 12 months, as well as giving me the opportunity to gather my thoughts on where I'm going
2021 has been an odd, but overall pretty good year hobby wise. Despite starting the year in lockdown, I managed to fit in a ton of games as things opened again, across a decent range of systems. 40k and Titanicus seem to have become my main focus, as well as a good amount of Middle Earth of course. It's been really excellent reconnecting with gaming friends who I've been separated from by the pandemic. My main source of socialisation has always been through gaming, so it's really made quite a difference to my mental health to have that back. Last year was really quite rough on me, even if I didn't realise it at the time. I'm certainly feeling a lot more grounded now I have that social outlet back in my life.
That reconnection and the fact that games are actually being played has meant that I actually painted far more this year than I did even last year where we spent most of it in lockdown. Gaming and events has always been an excellent motivator for getting stuff done! 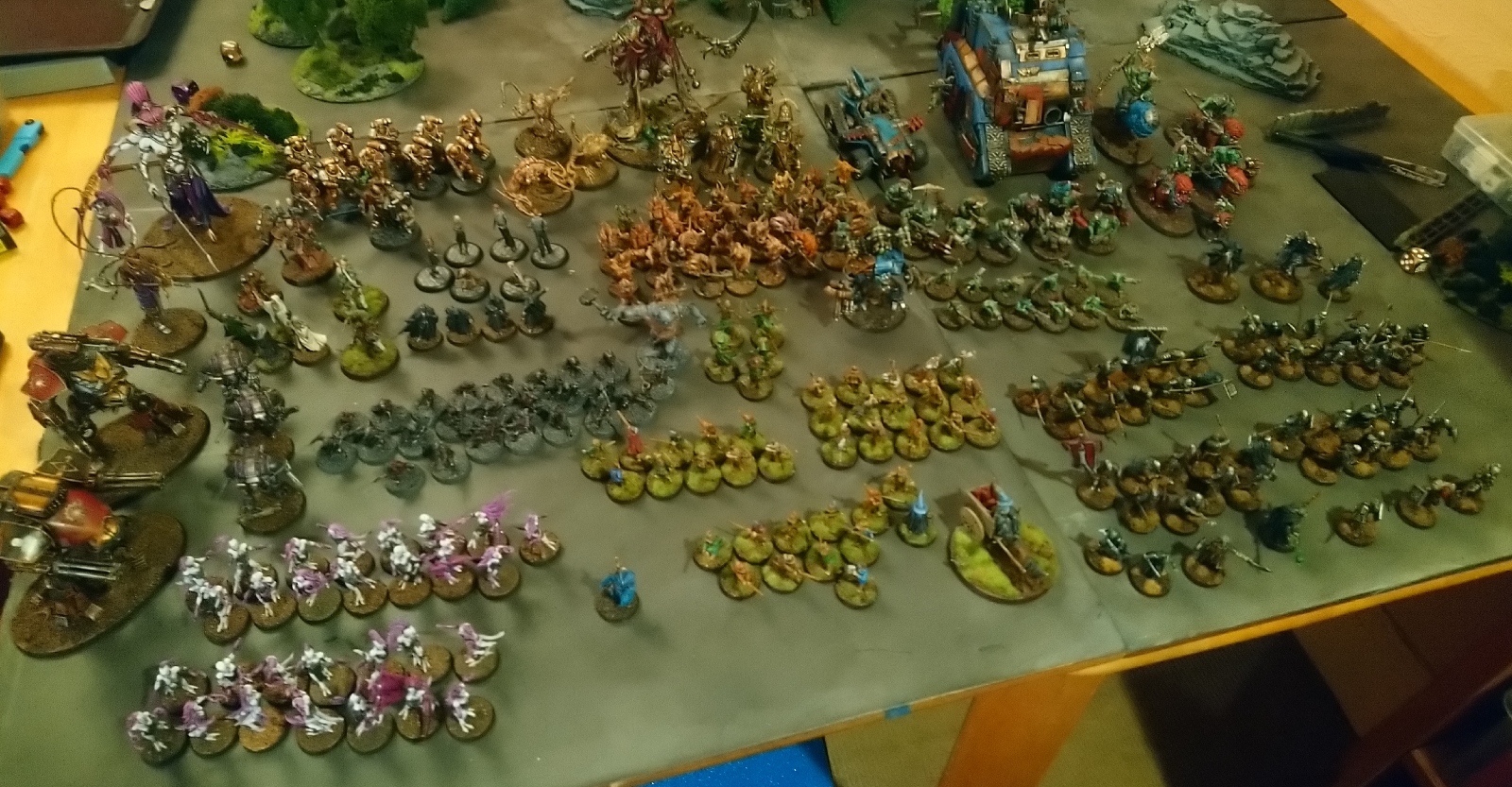 I can't help but be pretty impressed with that level of output tbh. I've been ridiculously productive and I feel my quality is going up all the time as well. My two best painted awards felt pretty good too! I'm actually shocked that I got best painted twice in rapid succession. I really don't think the armies which won were that impressive tbh, but I guess I've mastered the knack of making armies look good from about two feet away!
I've got another Middle Earth event next week (assuming we don't get whacked by restrictions), so I'll have to see if I can get a hat trick!
Unfortunately for my backlog, a lot of the painting I've gotten done hasn't actually been from my existing projects, which means that shockingly I'm still in negative figures for my painting points! The big one was when I started Orks in the summer, which ballooned my total to ridiculous levels quite quickly, as well as the various other bits and pieces I picked up across the year. Anyone keeping an eye on my painting points would have seen them zigzig across the negative numbers quite drastically as I desperately tried to wrestle it under control!
That's why I want to spent at least the early part of 2022 focusing on working on my existing projects. I'm sick of the endless fight against my backlog, so I'm going to be trying not to buy anything new for a few months. My big goal of the year is to get to the point where I have a fully painted force for every system I play, so I can only game with painted models. In turn, that should allow me to be strict with getting stuff painted before I play them. We'll see how that goes, but I think it's a pretty good goal to have.
With that in mind, I've actually started 2022 o a really positive note. I've been sprucing up and adding to my Mirkwood Elves which I took to Shaun's event at the start of 2020. 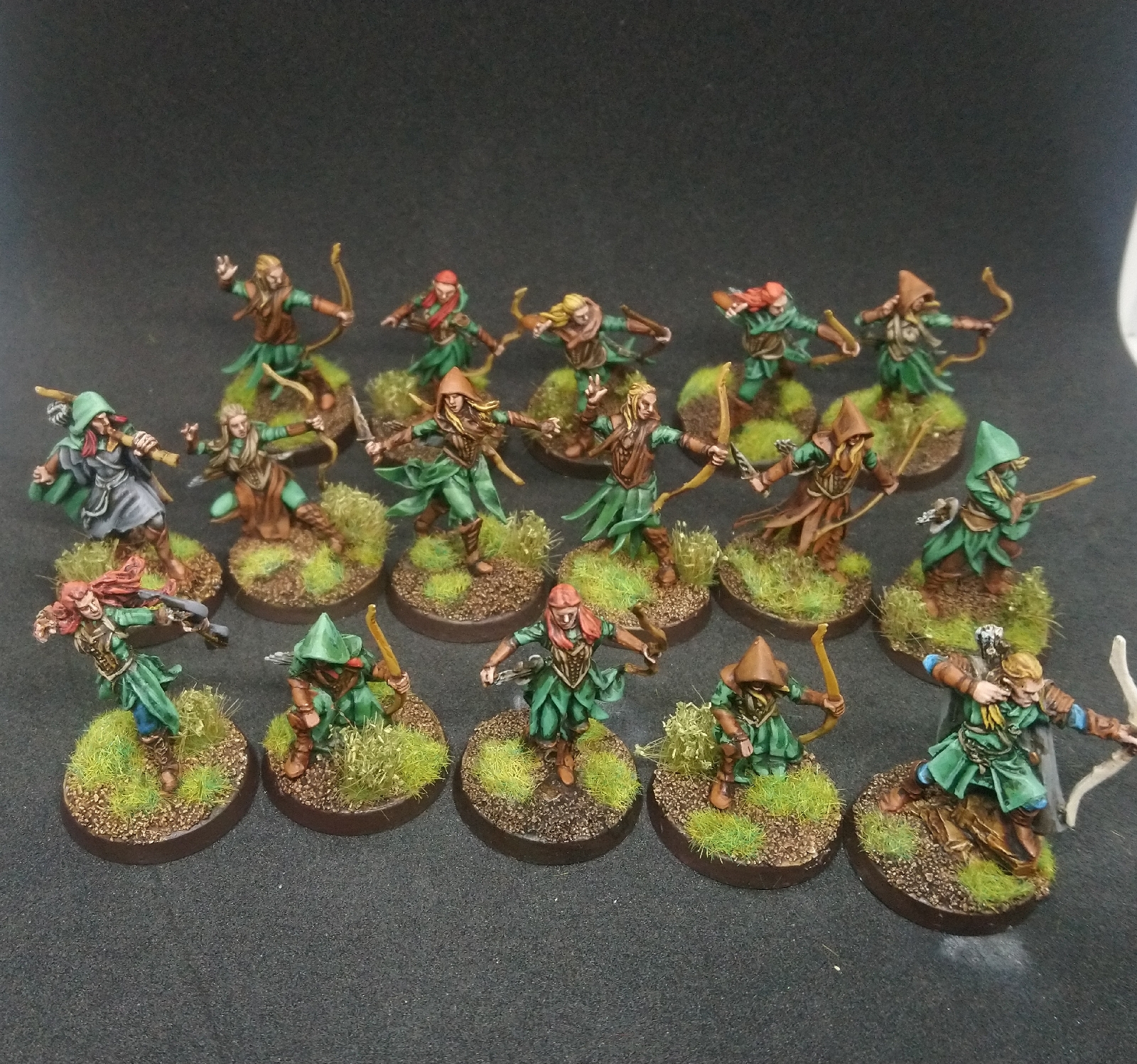 That seems so long ago now. Covid really has warped my sense of time. Anyway, I decided to add a few highlights to my existing models and make them pop a bit more, ready for the event I'm attending next weekend.
It certainly worked! I've absolutely fallen in love how they look now and it's making me want to go back and revisit the non Ranger elements of my Mirkwood army and bring them up to this level, plus actually finish the bits I lost interest in before. I have a bunch of armoured Elves I need to do, plus five different versions of Thrandui which have sat on my desk for longer than I even want to think about.
I guess that's going to be my next project after turning my attention to sprucing up my Corsairs for this weekend as well, but tbh I'm not as fussed about those. It's nice to get my new year hobby off to a roaring start though.
Anyway, I've rambled enough for now. Happy New Year to you all and I hope your year is full of happy hobbying. I'll catch you all soon!
Posted by Khorneguy at 22:58 4 comments: