I recently found myself with five days off with nothing to do. That in itself was a shock tbh, as I've been working way too much over the course of Lockdown.
'Great!' I said to myself 'I can get loads of hobby done.'
I should have known better. It turned out to be way too warm and muggy for me to focus on painting at all. I ended up spending most of that time replaying Final Fantasy 10!
Oddly enough though, my motivation to hobby has returned now I'm back at work. Maybe it's because I can settle back into my routine of sitting down to paint for an hour or two when I get home. Whatever the reason, I've actually started making progress on things again, which is always a good thing.
9th edition 40k has gotten me pretty excited. Partly because both my Emperor's Children and Slaaneshi Deamons have gotten a boost through the rules changes, but also because it shakes up the game drastically in general. I got really quite sick of how stale things got in 8th and ended up playing far more Middle Earth than 40k, so a change is long overdue in my book.
As a result of this newfound excitement, I've been working quite steadily through the 40k stuff on my Table of Shame, trying to clear some or most of it before the 9th Ed launch somewhat ruins the whole idea behind it.
There's also the fact that not all of the stuff on there is my own. There's also my mate's Death Guard which I've been working on for a while now. Luckily he doesn't mind me taking my time. He knows how I am at actually completing projects!
I did say to him I'd try and get a good chunk of it done before the edition launches though, so I focused on those first. I've already managed to crank out a Rhino and some more Plague Marines for him over the course of the past couple of days. 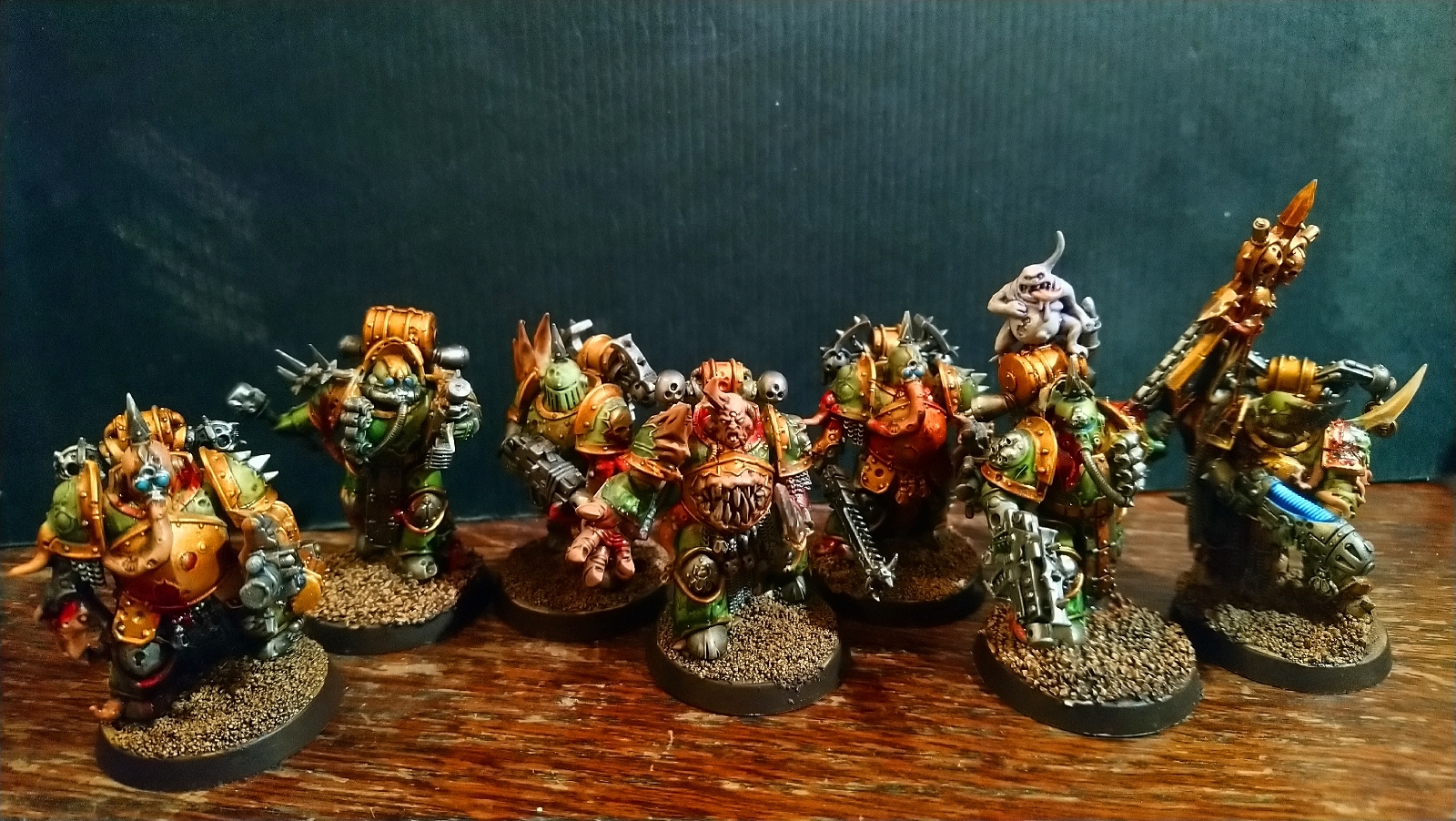 Not my best work, but they look decent enough and my friend loves them, which is the important thing.
Every time I sit down to paint Death Guard for him, I seem to forget just how ridiculously overdetailed those kits are. I can't believe they're just starter box models!
The Rhino didn't turn out too bad either: 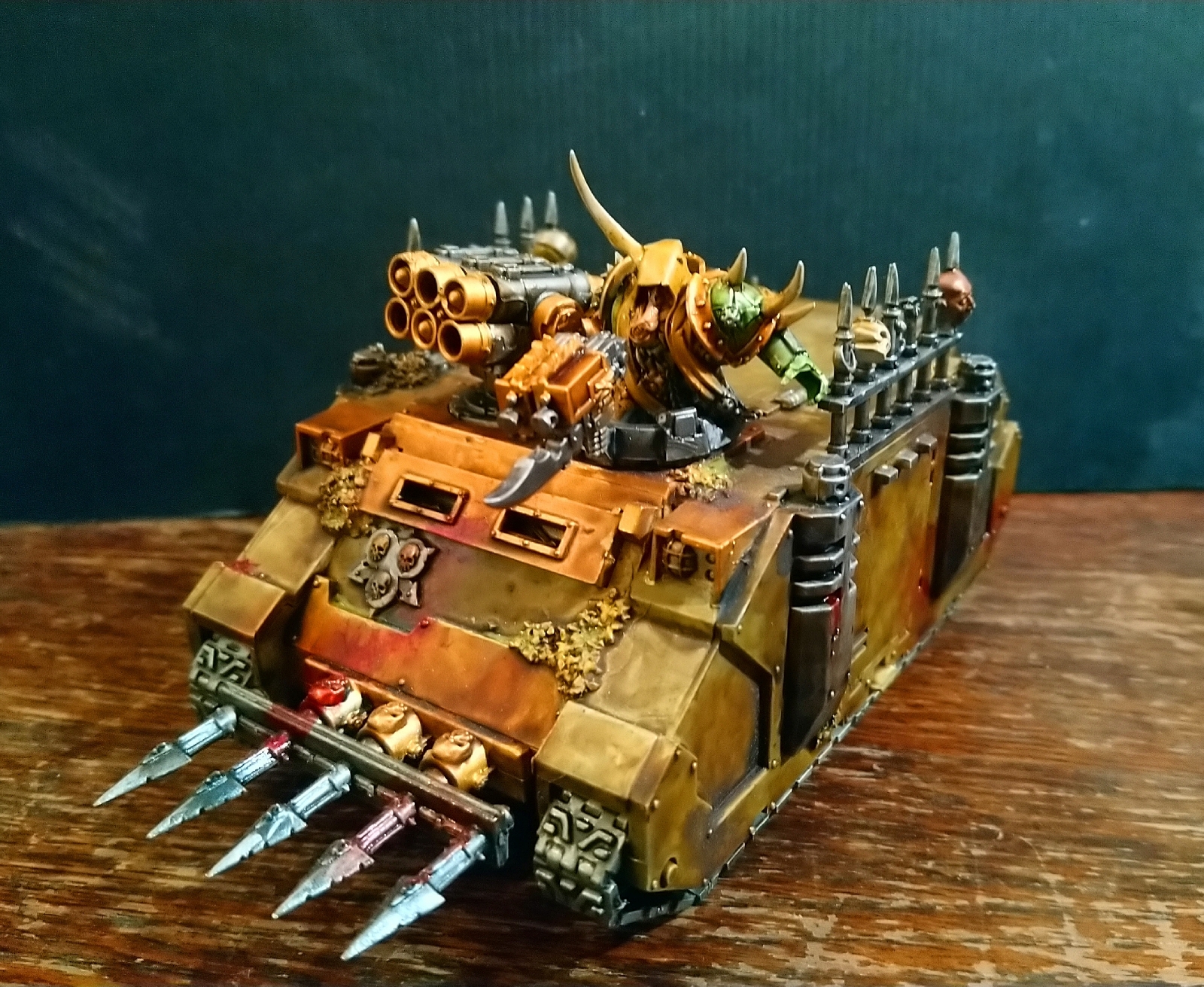 I'm pretty proud of the Plague Marine I converted into the hatch instead of the standard gunner though. It's a little detail, but it ties the whole thing into the overall look of the army rather nicely.
Anyway, with a few more Death Guard models done and out the way, I was able to focus on my own stuff for a little while.
With two Indomitus boxes on the way, I've been thinking about how I'm going to paint them. I had thought about doing Red Hunters to go alongside my Inquisition, as I've started painting my existing Primaris Marines in that scheme. However, the more I look at the knightly aesthetic of the new models, the more I was inspired to revive my old homebrew chapter, the Golden Knights.
There's only one problem: in the 12 years since I last played them or painted a model for them, Forge World has stolen their colour scheme for the Minotaurs! Cheeky gits!
I don't really mind though. It gives me the perfect excuse to update their colours to something a bit more interesting. My original Golden Knights fell to Chaos, so it would actually make sense that a Primaris-ised version of them wouldn't have the same scheme.
Fluff-wise, it'll also be interesting to come up with a justification on why they're back as a loyalist force. Right now, the background I'm writing for their rebirth talks about how there was a loyalist survivor who was in tbe Deathwatch at the time of their fall. He's been petitioning to be allowed to refund the chapter, but it wasn't until Gulliman returned to life and the launch of the Indomitus Crusade that he was allowed to do so.
Something like that anyway. On a cool note, I've actually had said loyalist, Alrik Wulfenhein, as the Watch Captain in my Deathwatch army for years. It'll be quite nice to develop his background further and decide what the future holds for him!
Anyway, back to painting. I want something recognisable as the original chapter, but with a twist. After a bit of playing around, this is what I came up with: 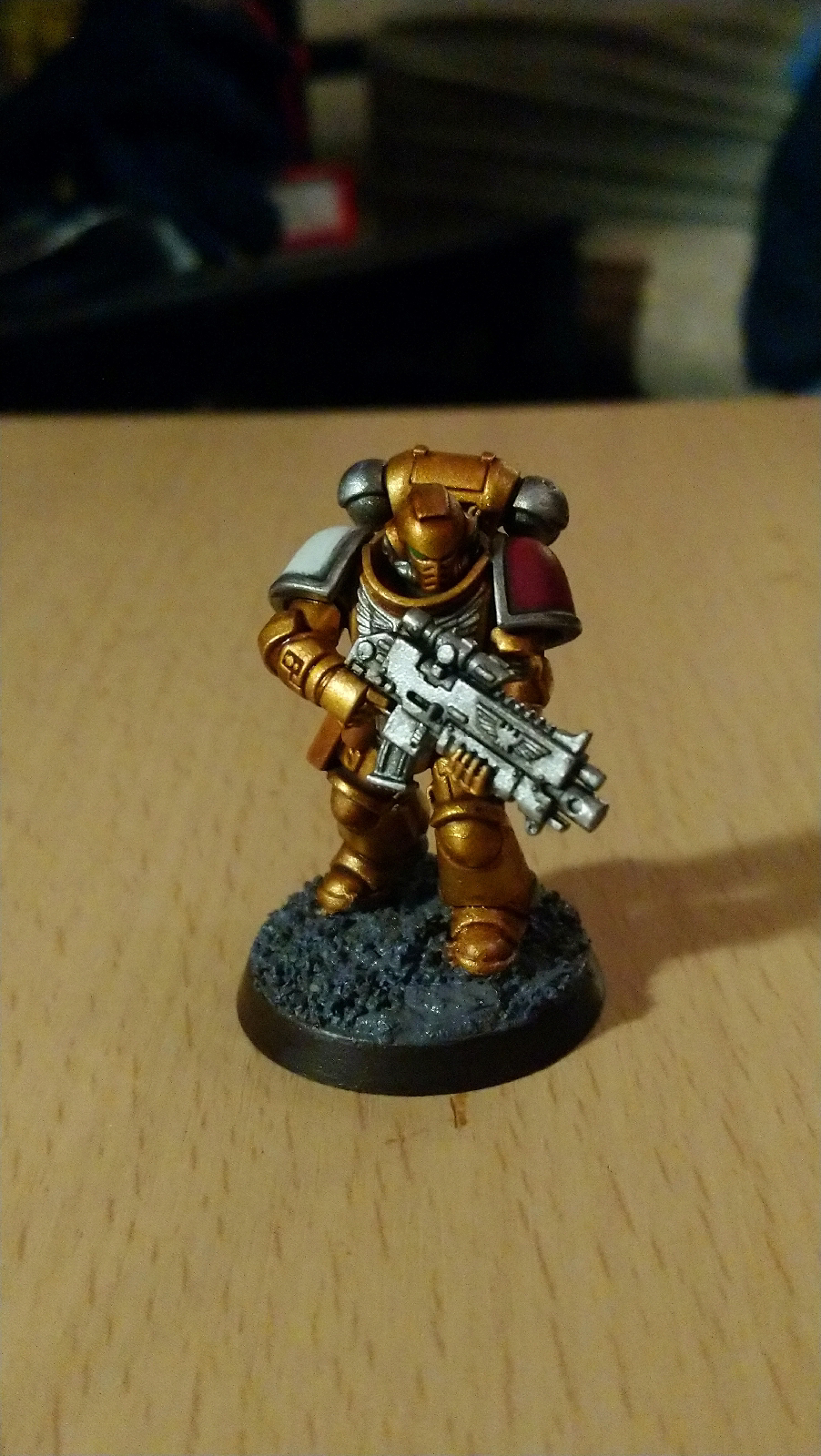 It's a fairly simple update to the scheme, but I quite like it. I'm thinking about possibly changing the Bolter casing to black though, just to make it stand out a little more. The final version of the scheme will incorporate a load of heraldry and squad markings too, really playing up the Knight aspect, so those will be fun to develop too.
It's quite a simple scheme to paint, which is always a bonus. My plan this weekend or early next week is to sit down with my Indomitus boxes and a can of Retributor Armour spray and crank through as much as I can in one go. The quicker I can get them done, the lesser the long term impact on my painting points!
I'm also hoping to finish up a few more bits this later week too, including the rest if this test squad. I've got to really take advantage of this hobby mojo while I have it!
Anyway that's all for today, stay safe and happy hobbying!
Posted by Khorneguy at 10:16 2 comments:

I really should know better by now than to say I'll blog more. I've been pretty busy hobby-wise over the past couple of weeks, but I've had very little energy to put a post together. Better late than never, I suppose!
Last time I talked about how I was thinking about doing some solo narrative games of Middle Earth to keep myself entertained during Lockdown. With things starting to be eased here in the UK, this might not be an issue for much longer. I still figure it's a fun project to work on though.

I've decided to start simply and find something which I already have most of the models for. One scenario which I've had my eye on for a while is the Orc brawl at Cirith Ungol. I've been thinking about doing it ever since I started working on a set of Mordor terrain last year, but as ever with me, I never really got around it.

Doing a bit of research, there's actually surprisingly few existing scenarios which cover this scene. The main one which I could find was in the old Return of the King rulebook from about 15 years ago. The ruleset has come a long way since then, but I'm sure it won't be too difficult to negotiate around that.


It also has the added benefit of me already having most of the models and terrain I need to play it. The only things I need to do is paint a few Uruk Hai and build a board for it!

I know that's a pretty big 'only'. To be honest though, I've been meaning to build a gaming board for years. I just haven't really found the time to do it and used mats to play on instead. I've even got all the materials I need for it. I found these 2 foot by 2 foot art boards in a charity shop years ago: 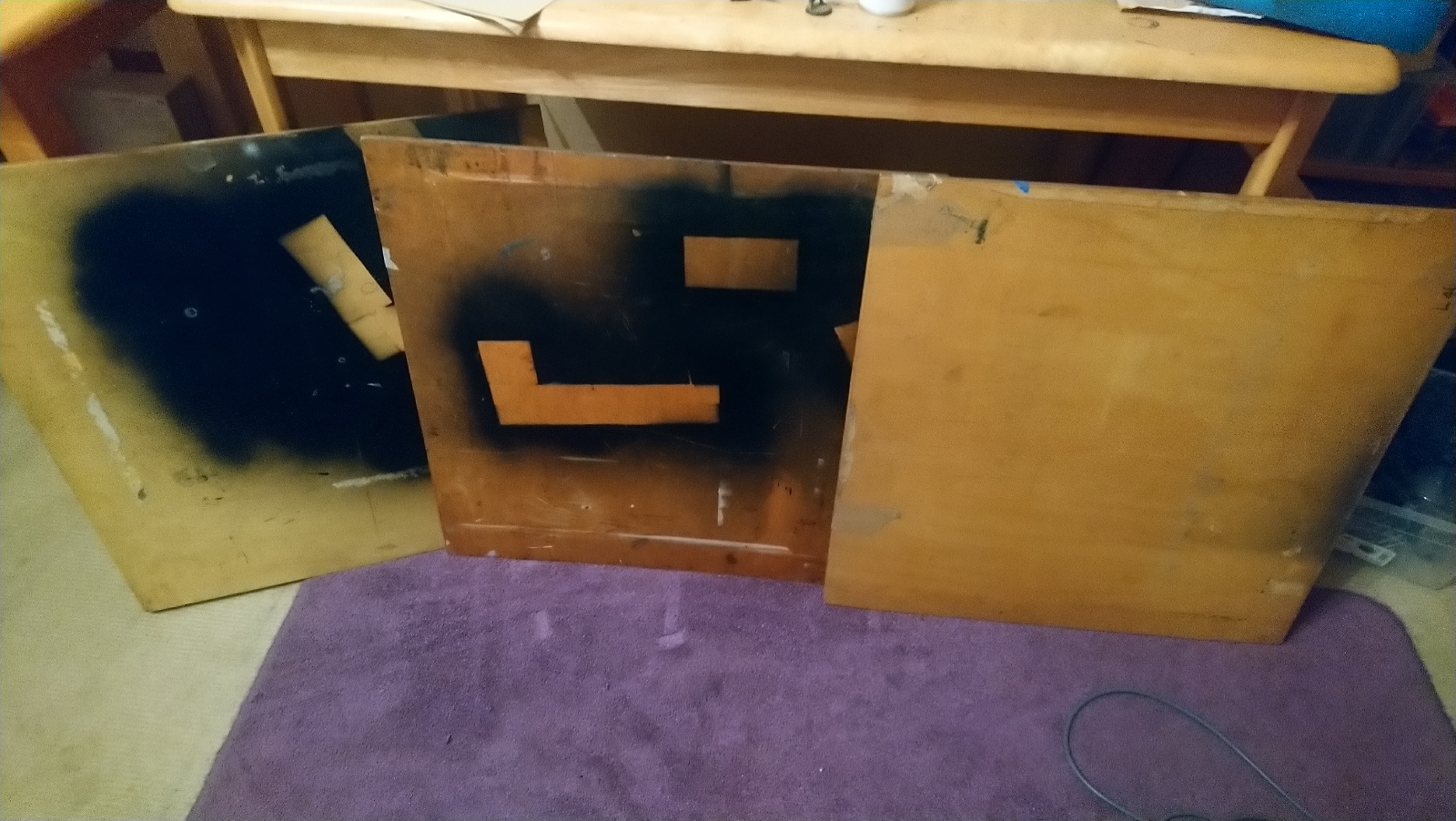 It was a brilliant find, I must say. The only issue was that there were only three of them.

Luckily I had an old Armies on Parade display board knocking about which i could use to complete the set and make a 4x4 board. All they really needed was a bit of a clean up and a few coats of spray paint, but as I said, I never actually got around to it until now. I've been using them to support a gaming mat instead.

With some government-mandated free time on my hands, I figured now's the perfect time to get it done.

A quick sand down and ten minutes with a spray can and they looked like this: 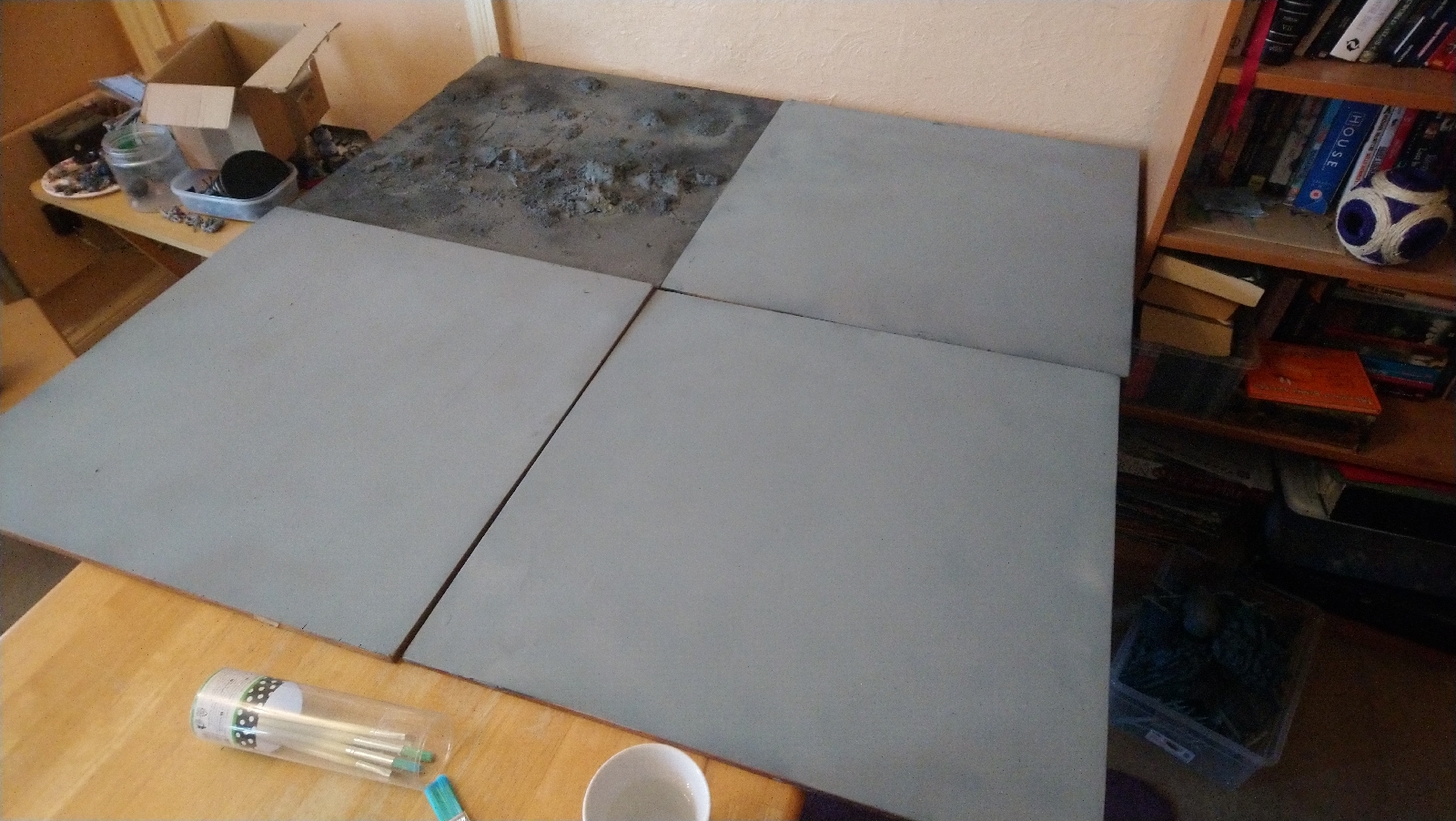 Not too bad, but they stood out horribly alongside the Armies on Parade board, particularly as they lacked the same kind of texture, so I started stippling on some slightly watered down Nuln Oil to try to both darken them down and add some visual interest at the same time. 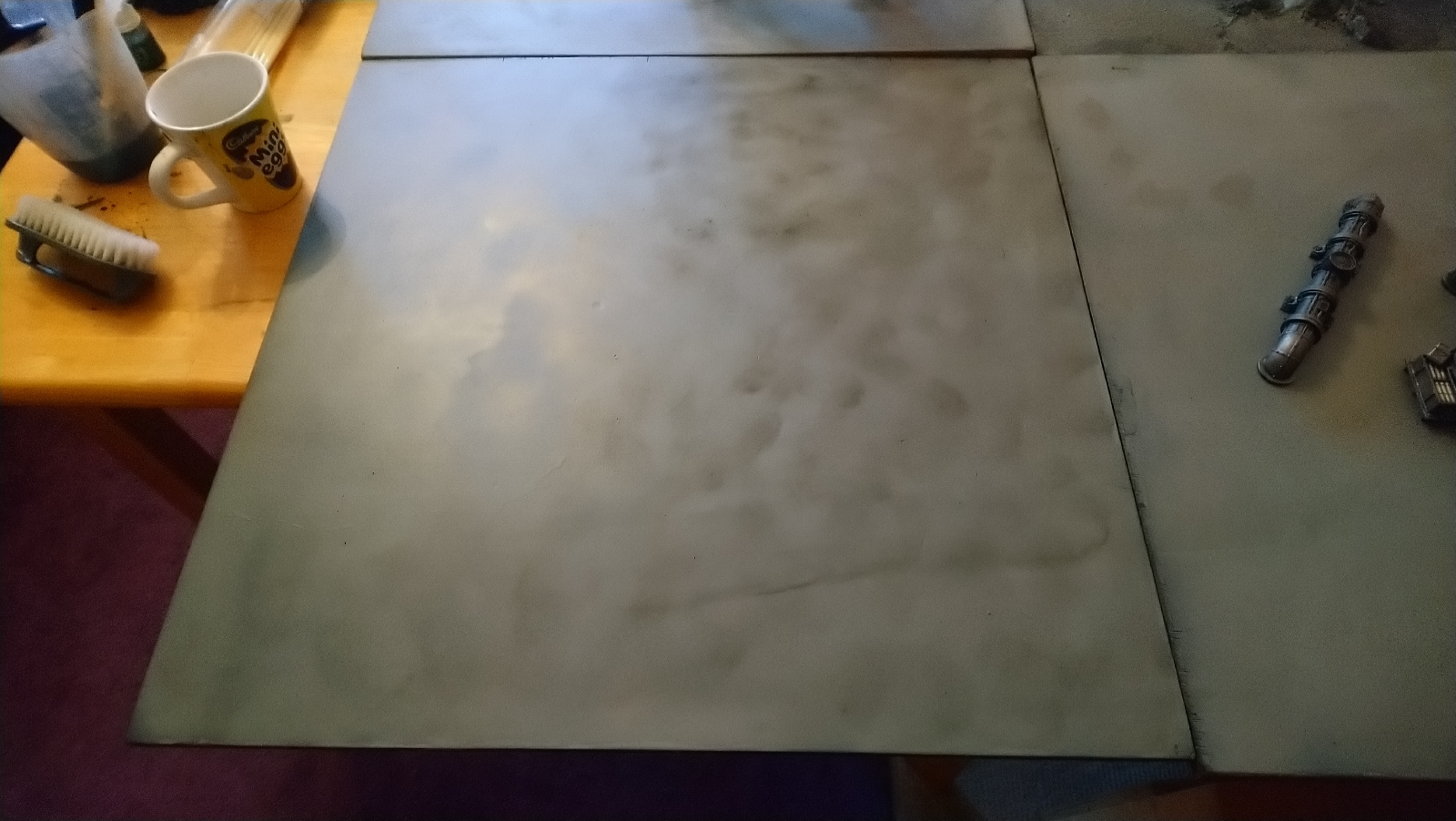 It took a few more layers than I thought it would. The wood really sucked up the wash! That added to the ridiculously hot weather that week meant that the layers kept drying in some weird ways.

This is how one of the boards ended up looking after a couple of layers: 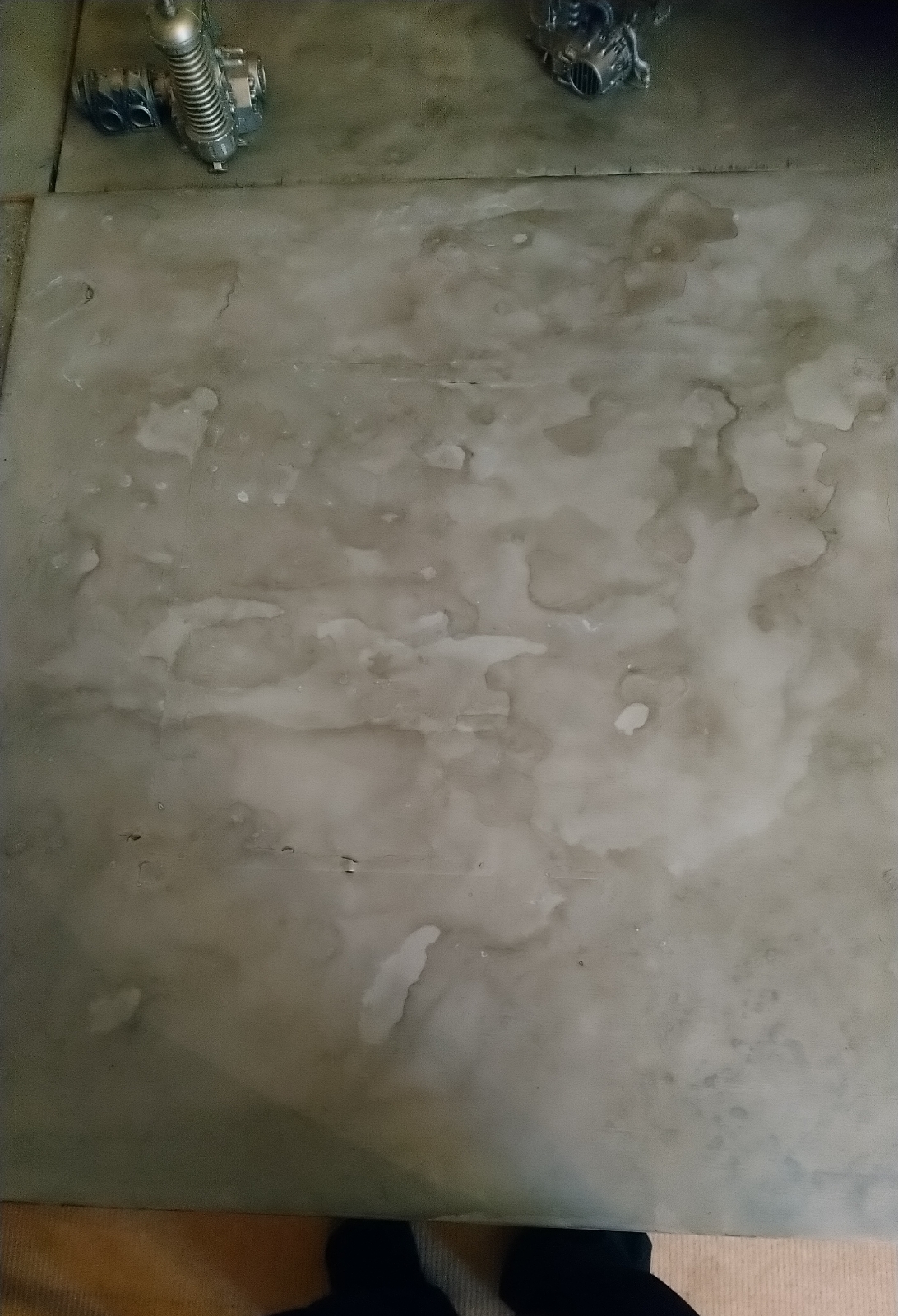 Not ideal, but I soon had it sorted after a few more layers. 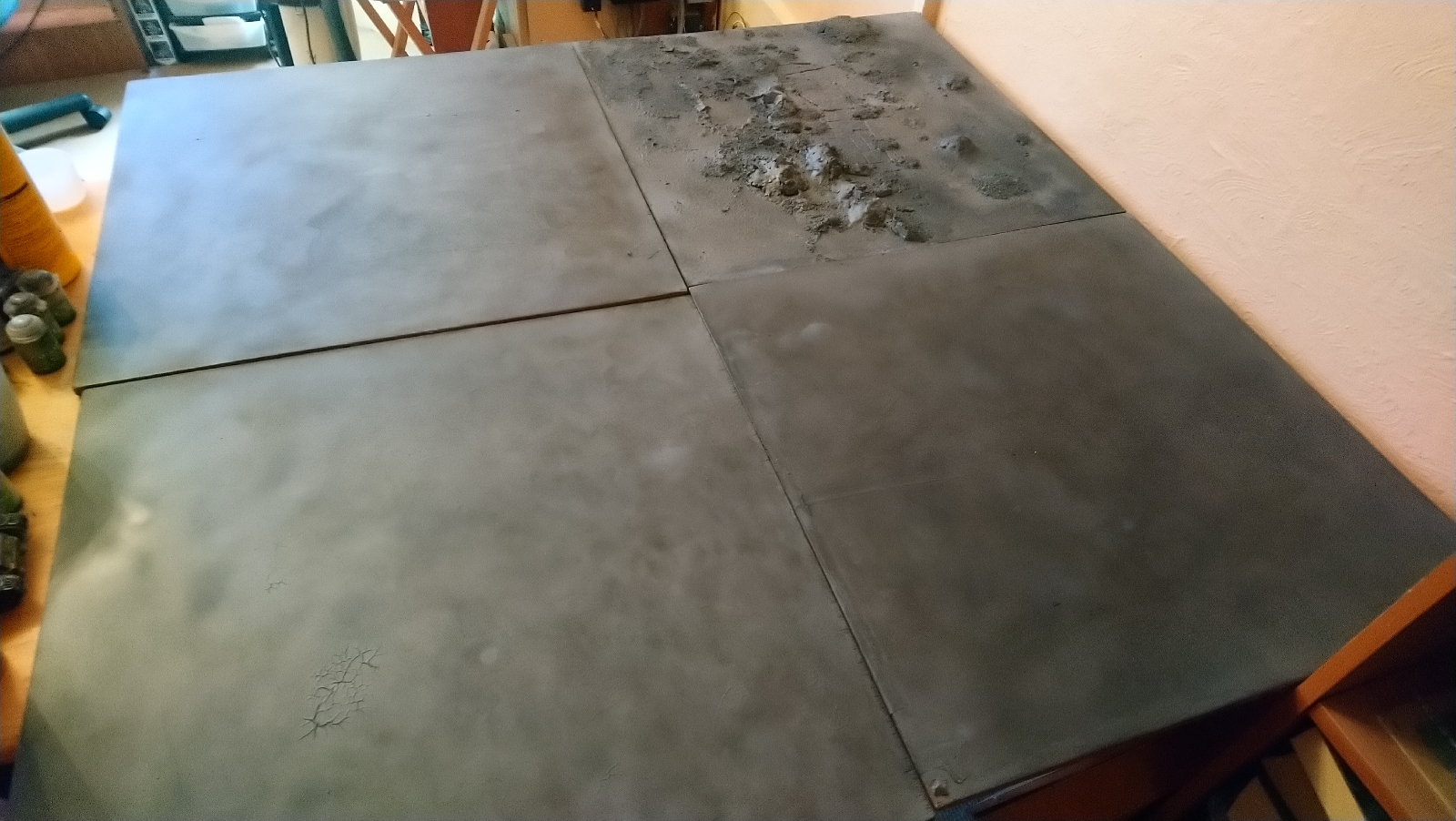 Nothing too flashy, but very passable and generic enough to cover many different gaming systems. A bit small for 40k, but perfect for pretty much everything else I play. 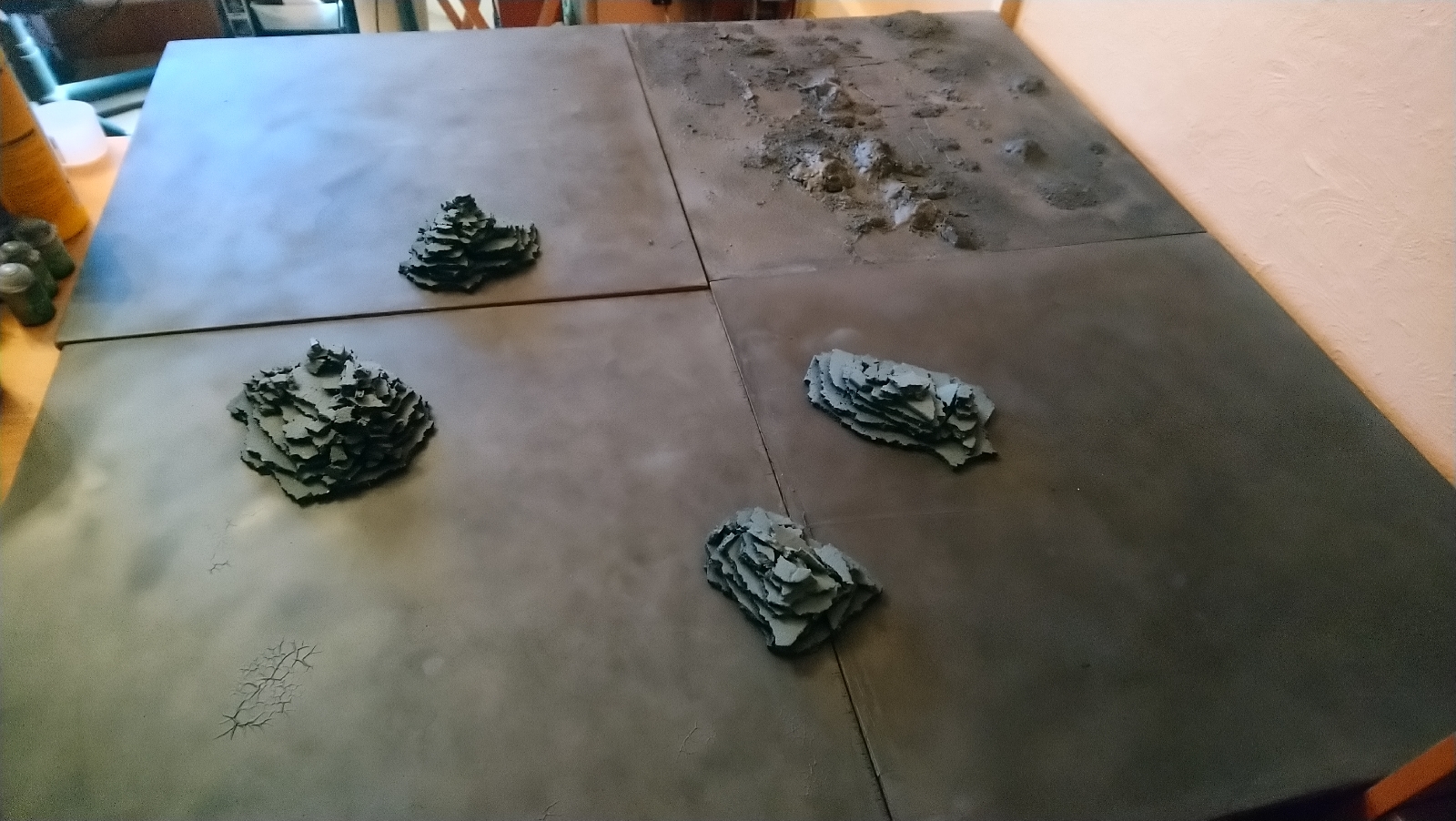 A few rocks and it becomes Mordor. A few buildings on top of that and it works for Cirith Ungol or other Mordor fortresses: 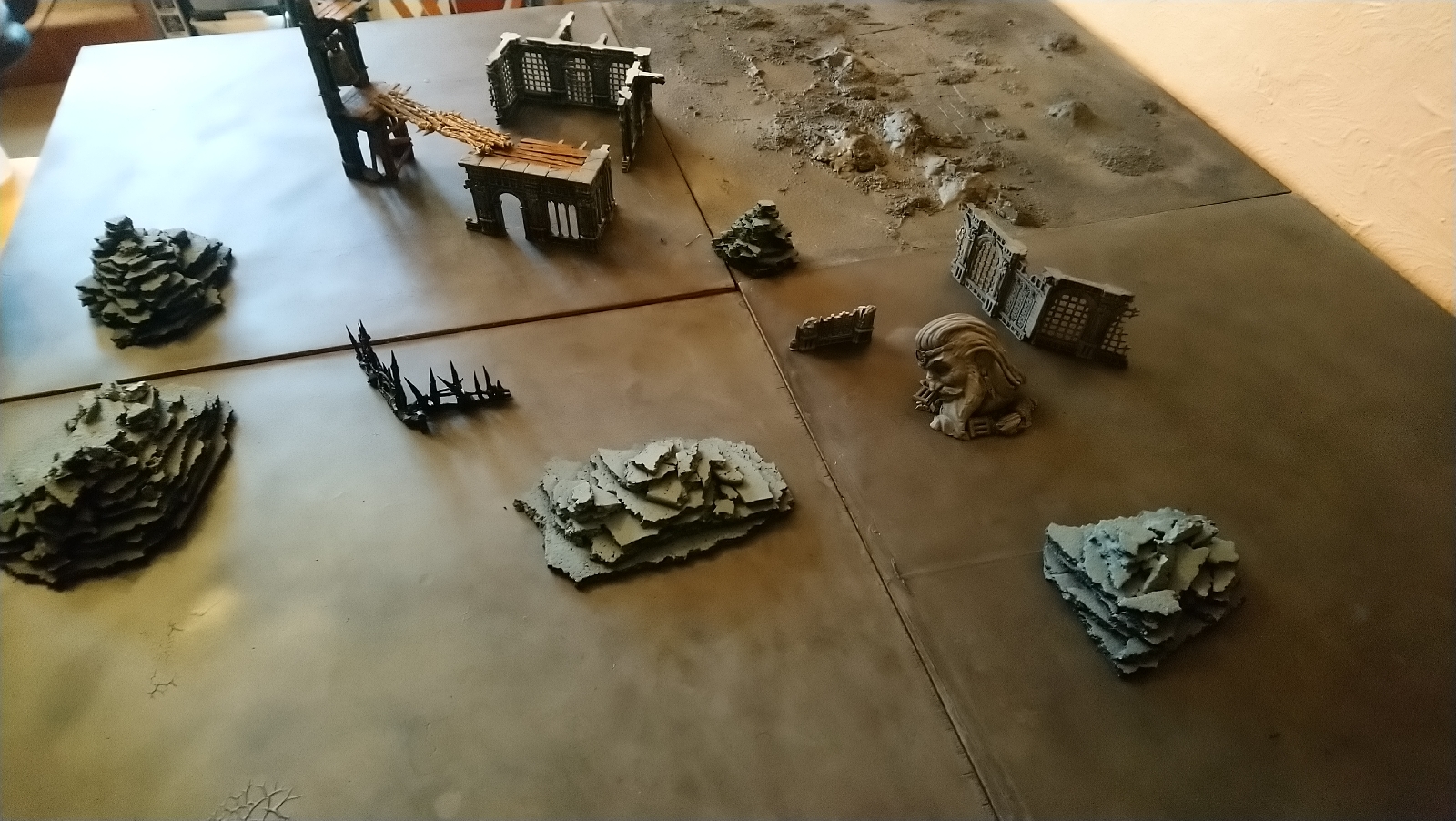 Alternatively, it looks pretty good for Titanicus too: 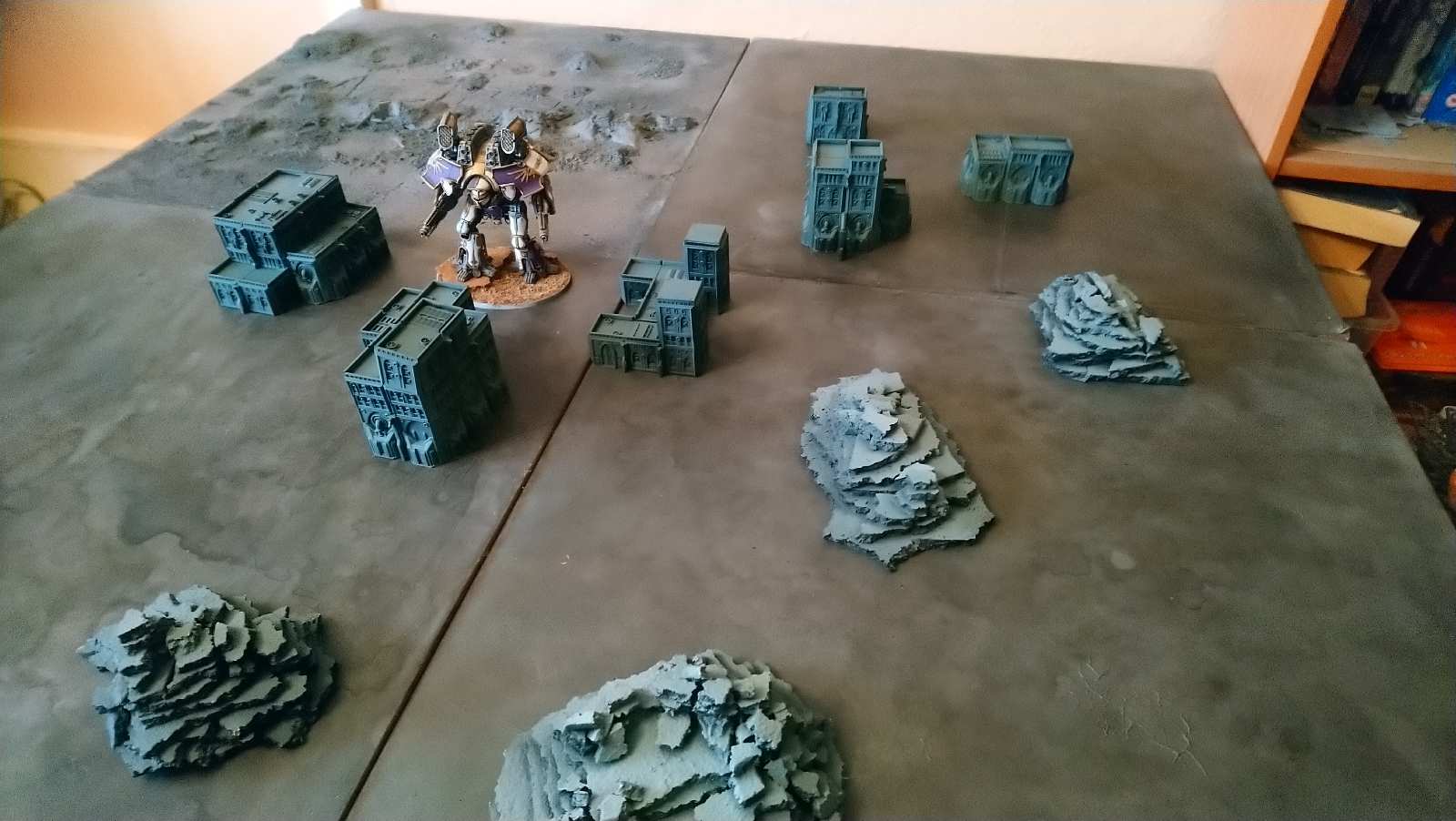 There's plenty of flexibility in there. Not bad for a few days work!
It's also quite handy as a backdrop for photographing models on, especially with a large window nearby for natural light. Here's some Plagueburst Crawlers from my Table of Shame which I finished up, so there's progress there too! I'm pretty happy with the work I've been putting in over the past few weeks. It's felt good to accomplish something I've been wanted to do for ages. Hopefully I can keep this hobby enthusiasm going, especially with 9th edition 40k on the way. I'm hoping to finish up my Table of Shame before then, especially as I broke my own rule and ordered the Indomitus box, but we'll see how I get on with that. Fingers crossed!
Posted by Khorneguy at 00:21 No comments: