I've been pretty busy recently, both hobby-wise and in real life, so yet again the blog has fallen a little to the wayside. I'd promise to rectify this in future, but quite frankly we both know it's about 50/50 whether that will actually happen.

So what have I been up to? Well for a start I've been painting some Shadowspear stuff. I actually got the box set on the day of release and painted a lot of it really quickly, I just haven't really had the time to get the stuff posted up on here (more on that later). 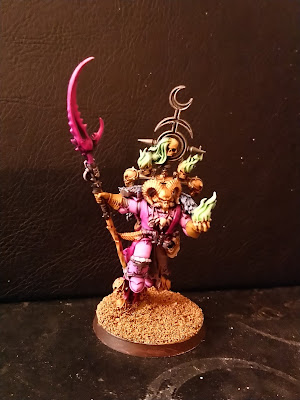 Of course I couldn't resist kitbashing the Master of Possession into something a little more Slaaneshi. I replaced the backpack icon and staff top with some Deamonette bits I had laying around. It's only a few simple changes, but I think it changes the character of him massively, really bringing out the shamanic nature of the model. Thus Ashur Karr, Fleshmaster of the Glorious Host was born.

Of course he then needed some deamonic minions to accompany him: 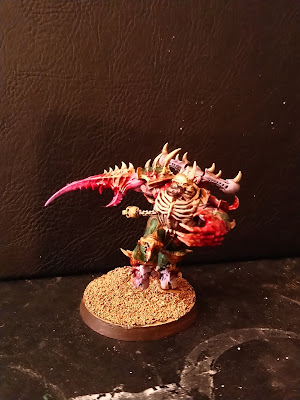 The Greater Possessed was just painted straight from box, with no modification. Something of a rarity from me. This particular sculpt really is the star of all the new releases in my opinion, up there in quality with the Forge World Gal Vorbak. It's a shame that the other one you get in the box really doesn't reach the same standard, but I suppose I can't have everything. I may try and do something with the alt sculpt to improve it at some point, but I'll have to see.

You'll notice that I painted him in Sons of Horus colours rather than Emperor's Children. That's because I love the idea of the Possessed in my force being prisoners rather than willing hosts. I got the idea from 'Black Legion' by ADB and it really stuck with me. I like to think of him as some hapless XVIth Legion warrior taken by Karr during the Legion Wars and kept as a favoured pet in some twisted form of sentimentality

Finally out of the model from the box which I've finished, we had the Venomcrawler. Again, it's a fantastic model. I want another two of them eventually. I'm really happy with how this one turned out though: 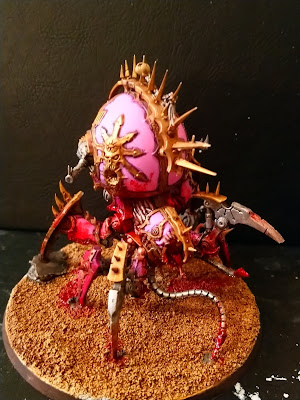 I love the way that the garish pink of the EC's makes the model look even more disturbing than it already was. Plus the look on my opponent's face when I deploy a giant pink and gold deamonic spider is priceless!

As you can see, I've been pretty busy. I did manage to build some Chosen from the Chaos Marines in the set too, but I'm holding off on painting them until the new Contrast paints come out so I can have a bit of an experiment. The Obliterators are remaining unbuilt until they get a points reduction, as I already have three of them and I see no point in blowing 575 points on fielding five of them!

I've also been busy building a Lord of the Rings Rohan force for an event which a friend hosted, but I'll cover that in my next post, along with the event itself. To be honest I've probably got enough stuff to catch up on blogging about and projects in the works to fill a dozen or so posts, it's just a matter of finding the time to write them. I might make catching up on blogging a mini hobby goal for this summer. I certainly find my hobby motivation shoots up when I'm blogging regularly, I just never seem to get around to it.