Army in a week and other projects.

I've had a weird and crazy couple of weeks. I've gone from being super productive, to being pretty ill, then came a ridiculous heatwave which meant that I struggled to find the motivation to hobby. Now that's eased off I'm finding that after really having to work hard in order to get back into swing of painting, I'm back in a super productive mood.

The big thing which I've gotten done was painting pretty much the entire Fellowship of the Ring in the space of a week: 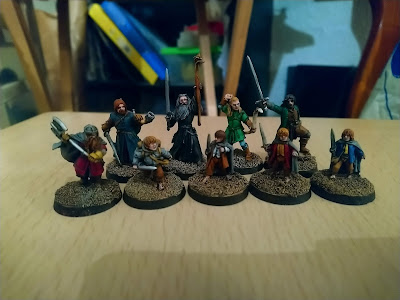 My motivation for this was the monthly Middle Earth night at my local gaming shop. Five days before the latest one, I decided that I wanted to field something a bit different to my Rohan and Army of the Dead, so I had a look atwhat I had to hand which I could get done in time. The only member I had painted prior to this was Aragorn (who I want to repaint at some point), but I had the models for all the Fellowship knocking about, so I thought "why not" and went from there.

I surprised myself a little with how well they turned out, considering that they were more or less a speed paint. I obviously want to go back at some point and spruce them up a bit, but on the whole, I'm pretty chuffed with them.

I even managed to get a few pics of the game itself. I got smashed after a few bad tactical decisions, but it was good fun. 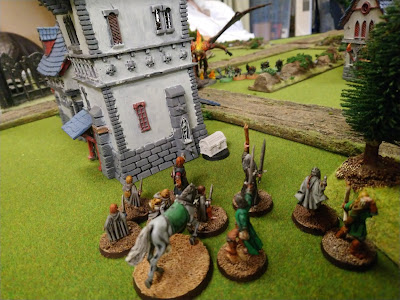 The best moment was easily when Merry and Sam managed to drive back the Balrog all by themselves, after reinforcements didn't arrive and the Balrog fluffed his rolls! 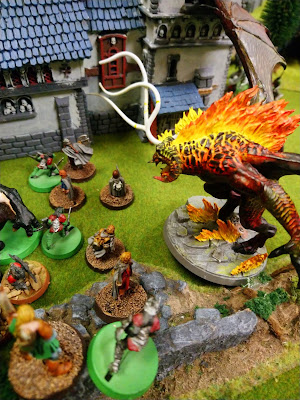 "You shall not pass!"


On top of that admitedly decent amount of progress, I also got a couple of Rangers of the North painted up for my Grey Company list: 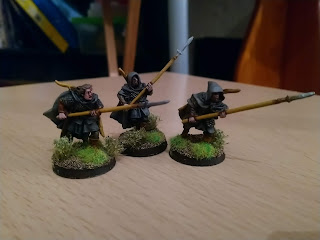 These are more of a side project than anything. I figure that I already have Aragorn, Legolas and Gimli for my Fellowship and Return of the King forces, so I might as well paint a couple of Rangers so I could field the Grey Company if I wanted to.

These were nothing fancy, just a single night's work plus a few minutes doing their bases, but they've turned out pretty well. I've got another half a dozen or so to finish up, plus Halbarad and a Mounted Aragorn to make my fifth Middle Earth army. That's kind of ridiculous when you consider that I only picked up the game in February!

I've noticed that the nature of LOTR, with various heroes available in multiple army lists, makes it almost far too easy to just stray into another army project without even thinking about it. I'm already thinking that I should pick up some Hobbits, as I've already to a decent amount of heroes who could lead them. This rabbit hole just keeps getting deeper and deeper!

On top of all that, I even made little more progress on my friend's Nurgle stuff: 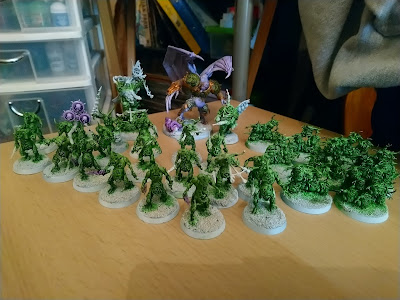 Not as much as I wanted, but luckily he's not too bothered on how long it takes to get them done. I wanted to have at least the Plaguebearers and Nurglings ready for the game we had a few weeks ago, but real life interfered on that one. I'm going to see if I can finish them in the next couple of weeks though. All I really need to do is pick out some details using 'standard' painting techniques, then finish the bases and I'll have a good chunk of them done. Then I can work on some of his characters, which should be a bit more fun.

I'm loving how the green turned out and it was wonderfully simple to do. It was just two/three layers of Waywatcher Green on a Corax White undercoat, followed by a 2:3 mix of Contrast Medium and Militarum Green. I certainly like the result a lot better than my previous experiments without Medium. There's a good amount of the Waywatcher showing through, really pushing the highlights which Contrast is meant to create anyway.

This is turning into quite a long post, but there is one final thing which I've gotten finished.  If you remember last post, I talked about using Trello to organise my hobby progress. Well it actually paid off: 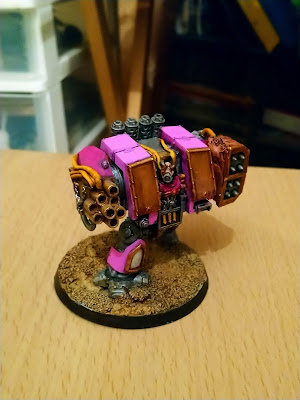 All that needed doing to my second Sonic Dreadnought was attaching the missile arm, but I've been forgetting all about it for about 18 months now. There's always been something more interesting to distract me, especially as I took a long break from playing 40k last year.

I decided to give it a bit of a spruce up whilst I was there and pick out a few extra highlights and details. Nothing fancy, but just making it 'pop' a bit more. Completing it means I've only got a couple more models to paint and and I'll have 2000 points of painted Emperor's Children ready to go, which is one of my goals for this year. It also proves my new organisational system works, which is rather nice to know.

That's all for now, but you can see I've been pretty busy, despite my motivation taking a nosedive for a while. It was only when I was writing this post that I realised just how much I've managed to bounce back. I didn't realise just how much I'd gotten through until I was writing it all down!

Hopefully this productive streak continues. I've got some something in the works which should occupy me for a little while. I'm pretty excited about it, so that'll probably be going into my next post. Getting back into a hobby groove again has also fired up my enthusiasm for blogging again, so that should be pretty quick in coming.

Until then: happy hobbying!